Do you pick the best active mutual funds? The ones that outperform year after year? If you do, you are probably in the minority. That’s not to say that you have a flawed selection process. On the contrary, you could have a wonderful system in place to choose the best funds. It’s just that the system in its current form has the deck stacked against you.

Active mutual funds come in all shapes and sizes. They invest in every category imaginable across the various markets, geographies, sectors and investment styles. According to the Investment Company Institute, the number of mutual funds worldwide increased to over 7,600 by the end of 2011 from only 564 on 1980. You can also add to that a total of almost 1,200 ETFs (a number that rises with each new investment fad).

The sheer number of mutual funds makes it difficult to choose wisely. Most people assume that an increased number of choices allows you make more informed decisions. However, research shows that more and more choices can be debilitating. This is one of the reasons investors have such a hard time making the correct decisions.

ACTIVE MUTUAL FUND PERFORMANCE
The probability of choosing the best active mutual funds is very low because most of them fail to beat their benchmarks over multiple time frames. Here are some mutual fund performance statistics from Standard & Poors to consider:

Here is a table showing the 1, 3 and 5 year performance of active mutual funds in each category at the end of 2012 : 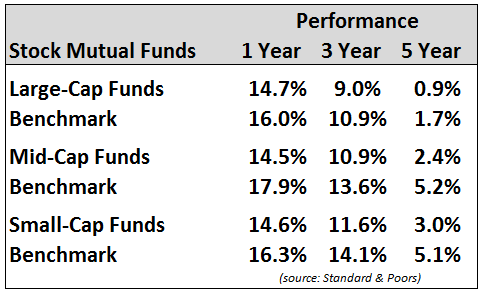 These are just U.S. stock mutual funds, but the performance of stocks in global, international and emerging market funds was not much better. A similar pattern emerges for bond funds as well. The one outlier was international small-cap funds where the 1, 3 and 5 year numbers showed only 15%, 10% and 21% of active funds underperformed their benchmark.

For the majority of these numbers you should notice that the number of active mutual funds that outperform gets lower as the period of time lengthens. It gets harder to outperform the longer your time horizon.

WHY ACTIVE FUNDS UNDERPERFORM
You would think that the index (benchmark) would be the average return for a market because half of investors should outperform while the other half should underperform. That makes intuitive sense. But as you can see from these return numbers this is definitely not the case. The indices are doing much better than 50% of all funds. The active mutual funds are getting routinely beaten over time by simple market indexes.

So why are the active manager results so poor when compared to a market index? There are a number of reasons, but the biggest one is costs. Active mutual funds charge much higher costs than simple index funds. According to the Investment Company Institute the average annual fees on stock funds are 1.44% and bonds funds average 1.02%. In comparison, all Vanguard funds average an expense ratio of only 0.19%. Most index funds offer similar low costs.

That’s a pretty big difference that the manager has to make up through investing skill. There are many very good investors running mutual funds but over the long-term it can be very difficult to make up that difference. One of the ways they try to do that is through more active trading. This increases transaction costs which make it even harder to beat an index fund (index funds trade infrequently, thus lowering costs).

Another reason is the law of large numbers. Here is Mr. Buffett’s take on how the size of funds affects investment performance (emphasis added):

“If I was running $1 million today, or $10 million for that matter, I’d be fully invested. Anyone who says that size does not hurt investment performance is selling. The highest rates of return I’ve ever achieved were in the 1950s. I killed the Dow. You ought to see the numbers. But I was investing peanuts then. It’s a huge structural advantage not to have a lot of money. I think I could make you 50% a year on $1 million. No, I know I could. I guarantee that.” – Warren Buffett

Most mutual funds don’t start attracting money until they show good performance figures. But once they do have a solid performance record the money really flows in. Having more money is to invest makes it harder to find worthwhile investments. That is what Buffett is telling us in his quote. He could have higher returns if he was managing millions instead of billions.  Once they hit billions in assets it is much harder for portfolio managers to be nimble and find the most inefficiently priced investments.

INVESTOR BEHAVIOR
You can find great mutual funds managers that will outperform their benchmark. It will just be very difficult to do so. Plus they are bound to have periods of underperformance which will make it harder to stay with them over the long haul.

One of the greatest mutual fund investors of all-time is Peter Lynch. From 1981 to 1990 his Fidelity Magellan Fund earned a 21.8% annual return versus the S&P 500’s 16.2% (still pretty solid) return. But the actual investors in his fund only earned 13.4% in that time frame because of their poor timing of buying when the fund did great and selling when it did not do as well. This is another unfortunate case of irrational investor behavioral wreaking havoc on investment results.

Add this all up and you will likely have better performance over time investing in simple index funds. As you can see from the performance numbers above, diversified, low cost index funds have been a proven investment strategy over active mutual funds the majority of the time.  Why waste your time trying to pick the best funds year after year when you can play it safe and still outperform the majority of mutual funds out there?

Unfortunately, if your main source of retirement contributions is through a workplace retirement plan like a 401(k), you may not have the choice to invest in a wide range of diversified index funds. The fund companies make much more money off of the expenses in their active mutual funds. You can find index funds with a low-cost fund provider by opening an IRA account but you still need to contribute to your 401(k), especially if you are getting a company match.

For this reason I will have a follow-up post in the coming weeks with a process you can use to pick active mutual funds if you have to.

Sources:
Too many choices: A problem that can paralyze
Active managers lost again in 2012
Lessons from a great fund manager’s record
Mutual fund fees are declining but still vary widely

Do you use active mutual funds, index funds or ETFs? Feel free to share your thoughts on your approach.