In September 2015 legendary investor Carl Icahn created a video where he warned of “danger ahead” for the stock market and  U.S. economy. On an appearance with CNBC Icahn said the following:

I think the public is walking into a trap again as they did in ‘07, and what I’ve said is, ya know as I get older, I think its almost the duty of well-respected investors – like myself I hope – to warn people to tell people that you really are making errors.

This was a scary prediction at the time because of Mr. Icahn’s stature in the industry and unparalleled long-term track record.

Well, you can’t win em all. 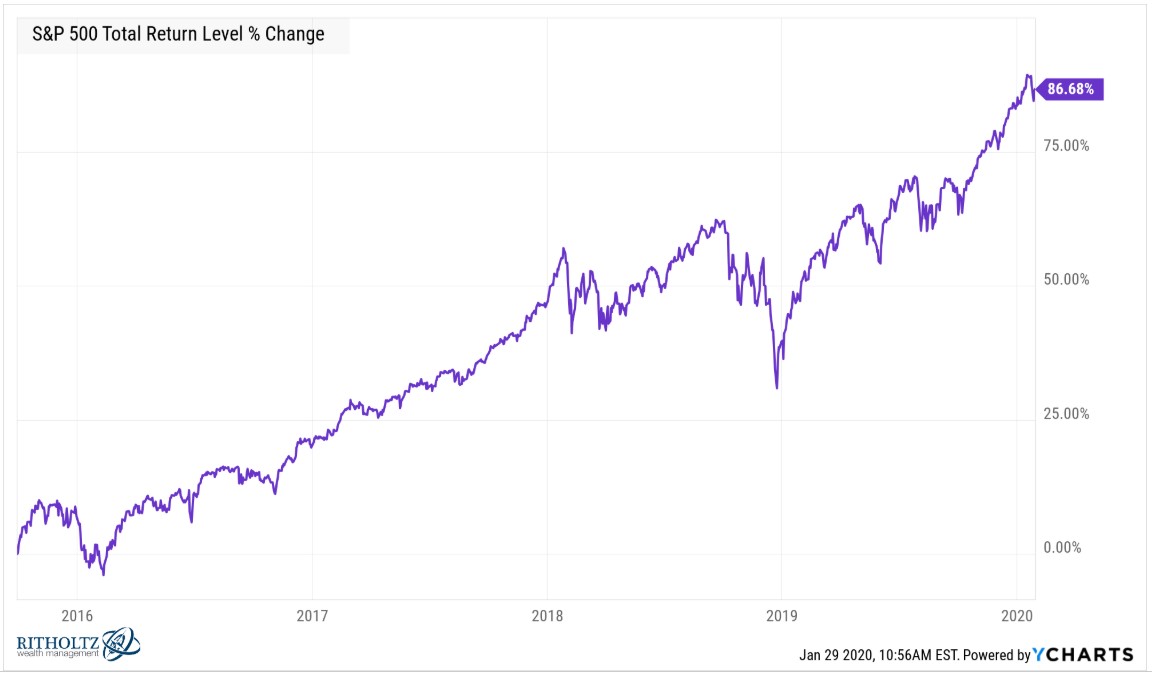 The market would have to fall nearly 47% just to get back to the original levels at which Icahn was sounding the alarm.

I’m not using this example to take potshots at Icahn. He’s made far more right calls over the years than wrong judging from his impressive track record and billions of dollars in the bank. But this is a good exercise in terms of thinking about the next market downturn, whenever it may come.

Traders often use the following table to show the need for risk management in your process:

While the relationship is flipped when there are gains, investors can also think about opportunity cost as well if they miss out on gains:

If you called for a crash 150% ago in the markets you need to see a 60% crash just to get back to the levels at which you called that crash.1 So if you’ve been sitting in cash for a number of years waiting to deploy at lower prices, you would need a bone-jarring market crash to make up for the opportunity cost of sitting on the sidelines.

The S&P 500 is now up roughly 500% from the March 9, 2009 lows. I wanted to look back at how far we would have to Marty McFly back in time based on potential corrections from here. So I had my colleague Nick Maggiulli put together a data visualization to show how far back it would take us using hypothetical losses of 10%, 20%, 30% and 40%:

A 10% correction from current levels would take the stock market back to levels last seen this past October.

A bear market of 20% would only take us back to levels seen a year ago.

Even a 30% bear market (which is more or less the average bear market over the past 70 years or so) would only take the S&P 500 back to late-spring 2017 levels.

And a 40% market crash would erase about three-and-a-half years of gains.

A 30%-40% market crash would feel awful. But were things really that bad in 2016 or 2017? Weren’t stock market investors feeling pretty good about themselves at those times?

The problem is we anchor to the peak values and become accustomed to those levels.2

We don’t judge ourselves by how we felt in the past because we make relative comparisons when it comes to money. So while you may have felt pretty good about the value of your portfolio in 2015, 2016, 2017 or 2018, going back to those levels from a 2020 starting point would make most investors sick to their stomachs.

Any long-term investment strategy requires investors to deal with both gains and losses. Not an earth-shattering statement here but some investors actually believe they can earn the majority of the upside while side-stepping the majority of the downside. Or they simply hope the losses will never come.

Being a long-term investor means sometimes you have to eat excruciating losses which then require enormous rallies to make up for lost ground. It also means participating in enormous rallies with the understanding that markets inevitably give back some of those gains in big chunks.

Life in the markets would be easier if we could all get word ahead of time from our favorite hedge fund manager about the timing of the next correction, go to cash, wait it out until the dust settles and buy back in again at the bottom.

Further Reading:
The Psychology of Sitting in Cash

1Calling a crash 150% ago would mean you called for a crash in 2014 which I know many people were doing at the time.