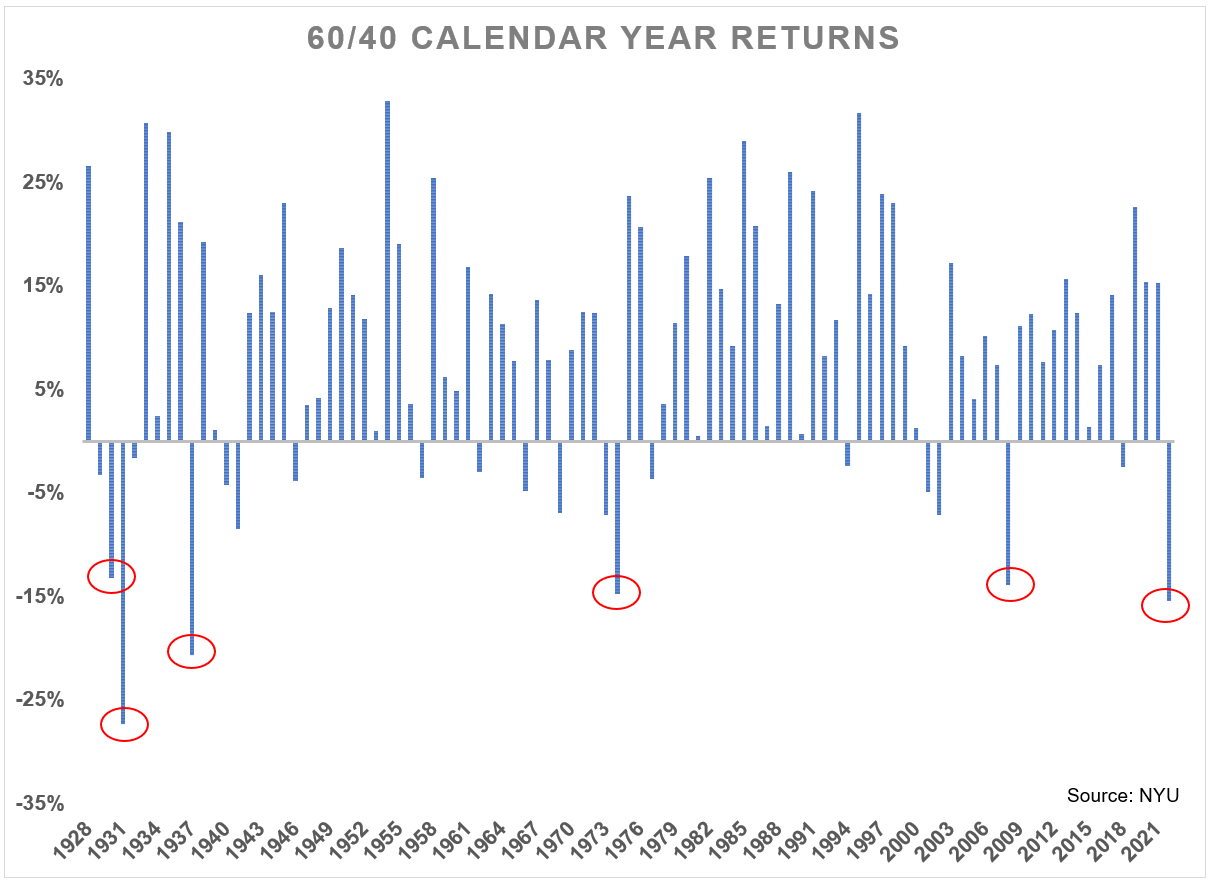 If we finished the year where things stand as of today, it would be the third worst year for a 60/40 portfolio in almost 100 years.

“There’s nowhere to hide” is a common refrain this year.

I’ve always been of the mindset that long-term returns are the only ones that matter. Anything can happen in the short-term. Diversification only works for patient people.

It’s also understandable why many investors are frustrated with this year’s performance, especially retirees.

It can be scary if you experience bad returns at the wrong time.

The Wall Street Journal had a story this week that detailed the struggles of a 60/40 portfolio this year and how it’s impacting investors who retired in recent years:

Eileen Pollock, a 70-year-old retiree living in Baltimore, has seen the value of her portfolio, with a roughly 60-40 mix, dip by hundreds of thousands of dollars. The former legal secretary had amassed more than a million dollars in her retirement accounts. To build her savings, she left New York to live in a less expensive city and skipped vacations for many years.

“A million dollars seems like a great deal of money, but I realized it’s not,” she said. “I saw my money was piece by large piece disappearing.”

This year has been terrible for a diversified mix of stocks and bonds but if we zoom out, the returns coming into this year were lights out for a 60/40 portfolio.

The good has far outweighed the bad, which is usually how it works in the financial markets.

The bad years are no fun but the good decades tend to more than make up for it.

Losing a large chunk of your life savings is never a good time but investors need to realize their portfolio values wouldn’t be so high in the first place if it wasn’t for the bull market that led up to these difficult times.

It’s also true that you can’t bank on investment returns carrying all the weight in your financial plan. Sometimes the markets simply don’t cooperate.

And the financial markets can only take you so far.

The Journal outlined a study that shows many retirees have to cut their standard of living in retirement because they didn’t save enough:

Roughly 51% of retirees are living on less than half of their preretirement annual income, according to Goldman Sachs Asset Management, which this summer conducted a survey of retired Americans between the ages of 50 and 75. Nearly half of respondents retired early because of reasons outside their control, including poor health, losing their jobs and needing to take care of family members. Only 7% of survey respondents said they left the workforce because they had managed to save up enough money for retirement.

Most Americans said they would prefer to rely on guaranteed sources of income, like Social Security, to fund their retirement—not returns from volatile markets. But only 55% of retirees are able to do so, the firm found.

It doesn’t matter how high or low your investment returns are if you don’t save enough in the first place.

It would be much better if we lived in a world where more people had a pension or easier access to regular income streams in retirement.

Unfortunately, most of us are stuck dealing with the financial markets, volatility and all, to improve our standard of living over the long haul.

But the important thing to remember is it doesn’t matter how you invest your money if you don’t save enough in the first place.

The financial markets can’t save you if you don’t save.

Further Reading:
The Worst Years Ever For a 60/40 Portfolio

1As usual, I’m using the S&P 500 for stocks and 10 year treasuries for bonds. Data source here.