These are the past 7 annual inflation prints by month:

That’s 7 months in a row of inflation above 8%. This hasn’t happened since the early-1980s.

The Fed has been raising rates aggressively, supply chains are improving, oil prices have fallen by a third and gas prices are well off their highs.

I could walk you through each individual component of the inflation calculation but there are econ wonks who can explain the intricacies of owners’ equivalent rent and such much better than I can.

Let me offer two simple explanations without having to get too much into the weeds about economic data calculations.

(1) Everyone got wealthier during the pandemic.

OK, maybe not everyone but the royal we is far wealthier. Collectively, U.S. households got much richer during the pandemic. 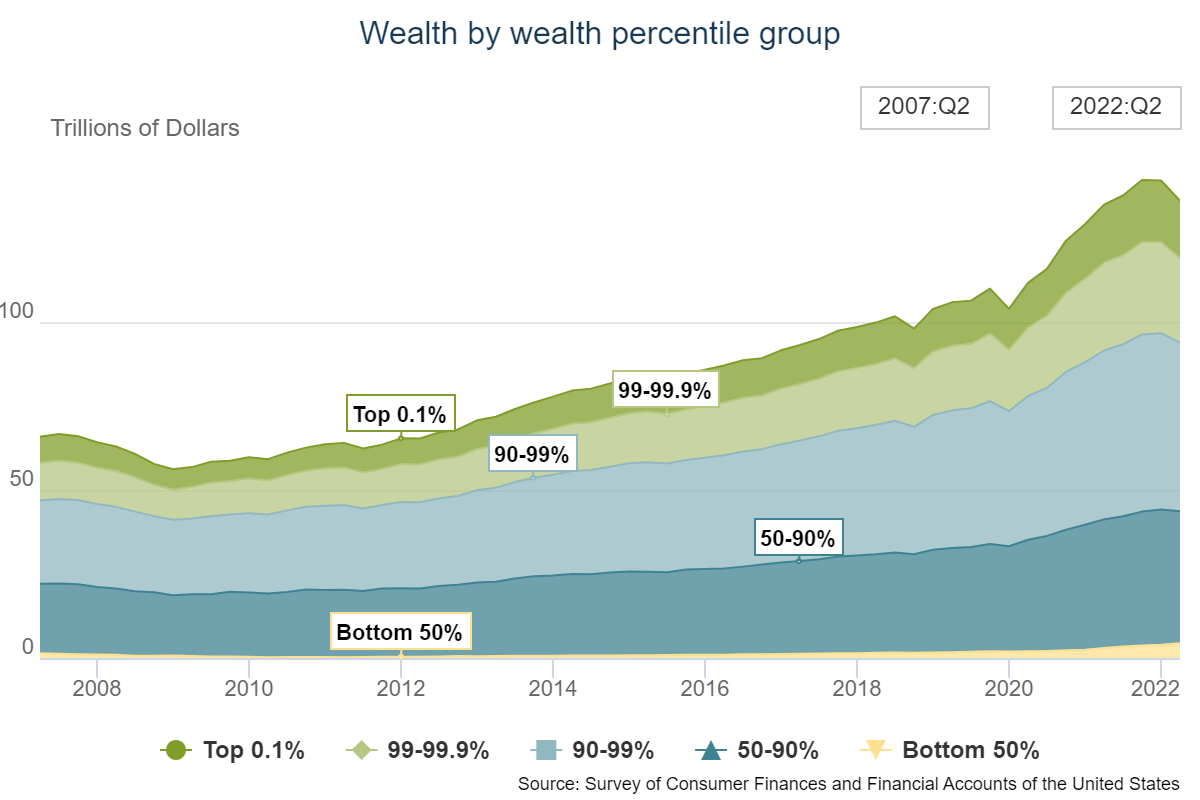 By the end of the second quarter net worth was up to more than $135 trillion, after hitting an all-time high of nearly $142 trillion coming into this year.

That was from the Covid low through the post-pandemic high but even if we start from pre-pandemic levels, the 30% increase is by far the largest 2 year increase in net worth on record before this period.

Take a look at the change in net worth of the bottom 50% over time: 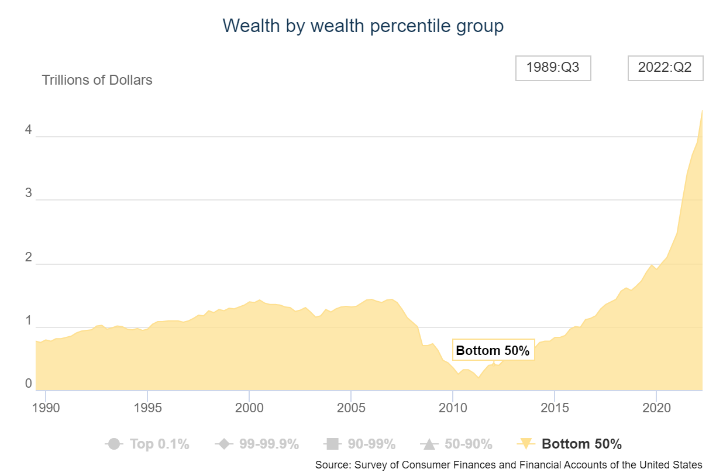 So in a little less than 20 years, the net worth of this group rose by more than $620 billion.

The bottom 50% was devasted by the financial crisis and housing crash with the total net worth of this group declining to $190 billion.

So the net worth of the bottom 50% has increased by $2.4 trillion since the start of the pandemic in early 2020, meaning it has more than doubled in less than 3 years.

This group of households tends to spend a greater percentage of their income than those with more financial assets so it shouldn’t come as a surprise that people continue to spend in the face of higher inflation.

The U.S. consumer has likely never been more prepared for high inflation (and a potential recession) than they were coming into this period of higher prices.

No one likes inflation but we love to spend money in this country. So most people have simply decided to complain but still spend through the pain of higher prices.

Inflation was caused by some combination of the pandemic, government spending in response to Covid, supply chain problems, consumer spending, Russia invading Ukraine and the Fed.

I may have missed something but that gets you pretty close to the root causes.

But at the end of the day higher prices come from businesses raising prices.

Corporations didn’t cause inflation but they are sure as hell taking advantage of it.

Just look at the operating profit margins for S&P 500 companies: 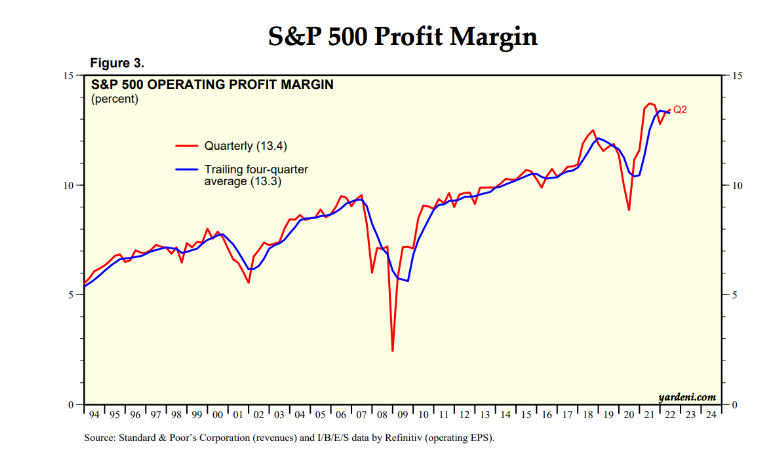 They’ve been going up even as inflation has gone skyward.

So you’ll hear CEOs complain about higher input costs, higher wages, a labor shortage and supply chain issues but do not shed a tear for them.

They responded by increasing prices to such a degree that their margins have hit all-time highs.

While households have been forced to pay higher prices at the pump and grocery store, corporations have been able to pass along cost increases to consumers.

Again, inflation was not caused by corporations and business owners. And there have certainly been many businesses impacted by higher input costs.

But while workers get blamed for demanding higher wages and the government gets blamed for a spending binge and the Fed gets blamed for keeping rates low for too long, corporations have somehow sidestepped blowback despite record profit margins.

And do you think these businesses will lower prices as their costs fall?

I’m not holding my breath.

The Fed may very well put an end to these trends by throwing us into a recession.

But as long as businesses pass along cost increases to consumers and consumers continue to spend down their savings, it’s possible inflation will remain sticky for a little while.

Michael and I shared some thoughts about persistently high inflation on this week’s Animal Spirits video this week: