Recently my father passed away leaving roughly $150k to me as an inheritance and I’m trying to figure out if I should save or invest it. I’m 26 years old and served 4 years as an army officer. I will be separating honorably soon where I’ll go back to school and may need to access these funds. I also may use them to buy a future house or get married. I’m afraid of investing the funds short term (less than 3 years) in stocks as volatility could impact negatively in the short term. CDs and some bonds seem like low returns when interest rate are raising (shouldn’t I wait to purchase a CD if interest rates will rise?). I did purchase I bonds with a 9.62% interest rate but I still don’t like the idea of the rest of the money sitting in a bank savings account yielding almost nothing. Is sitting in cash the safest bet short term?

It’s kind of morbid to think about, but with some 70 million baby boomers, there will be a lot of this going on in the coming years.

The boomers are by far the wealthiest generation and a lot of that wealth is going to be passed down to the next generation in the coming decades: 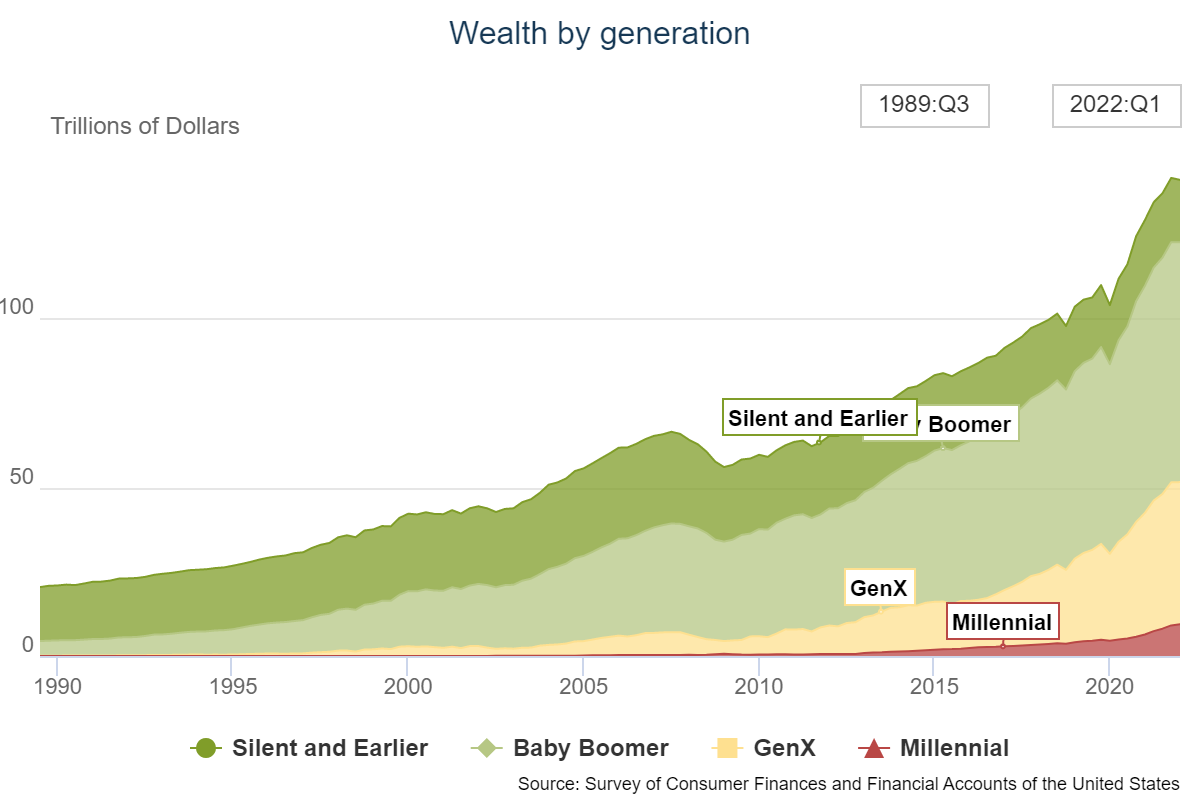 Money is money but since the source of this capital is coming from your father’s death I’m sure there is going to be some additional emotional baggage attached to it.

You never want to screw up a big money decision but the regret potential could be even higher when we’re talking about an inheritance.

Luckily, you already have an idea of your risk profile and time horizon for these funds. That’s the first step any time you’re investing new money. 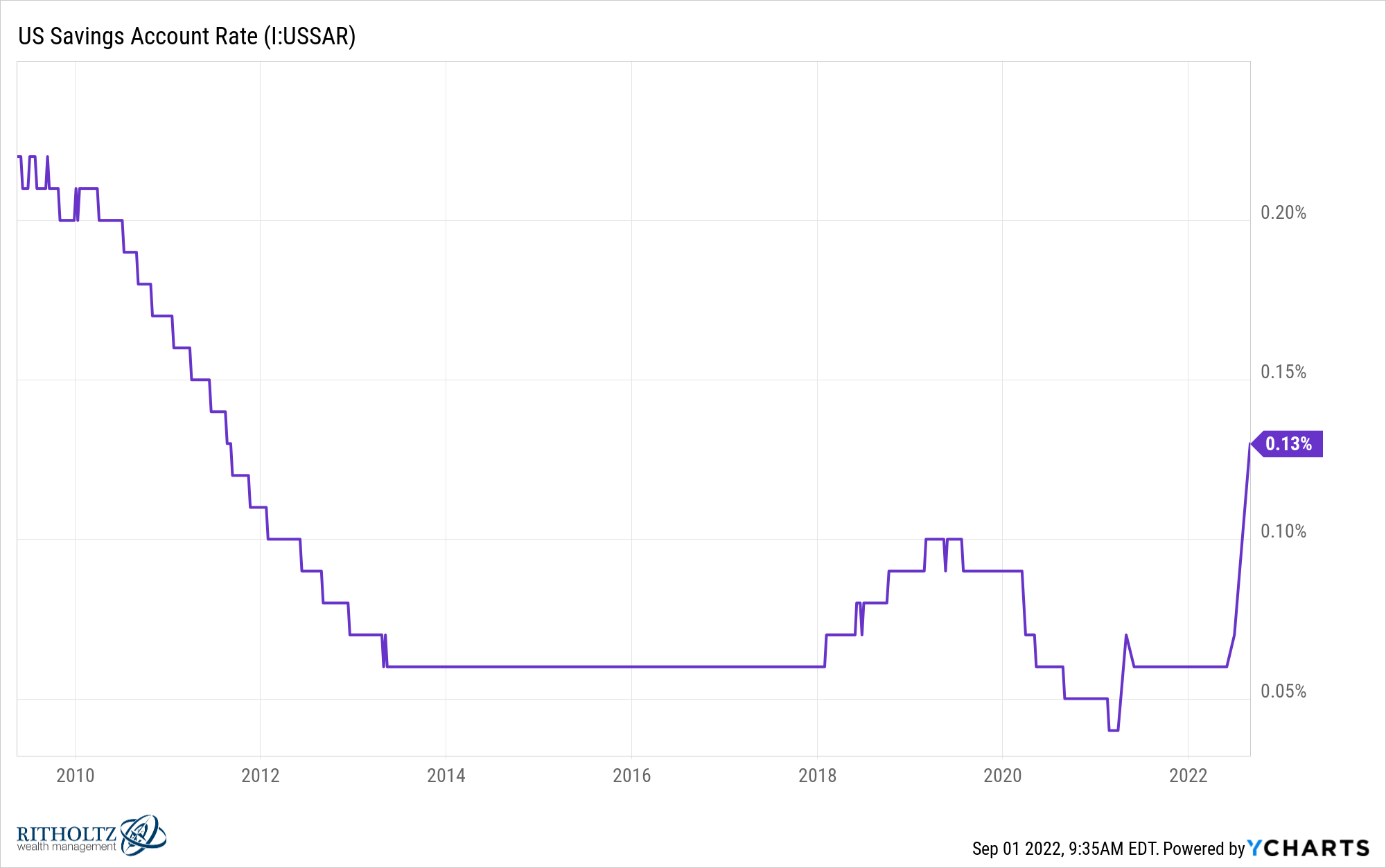 The bad news is the Fed raising interest rates is likely one of the reasons the stock market is falling and could push the economy into a recession.

The good news is savers like you can finally find some yield on their cash.

Just look at the changes in treasury rates this year: 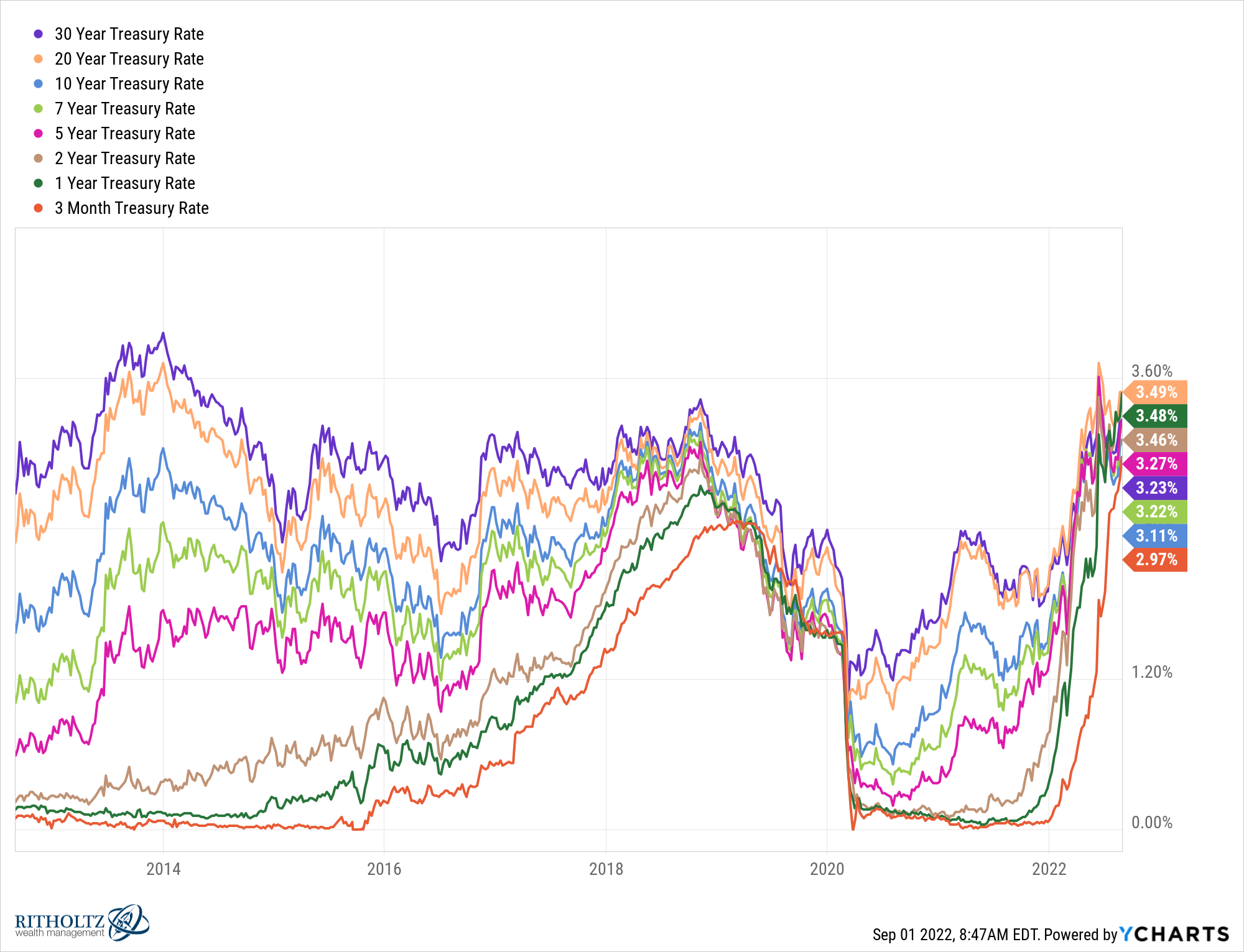 One year treasuries and 3-month t-bills are both up around 3% from their levels at the start of this year. And these short-term bonds now yield basically the same as intermediate-term and long-term bonds.

Why does this matter?

These bonds come with lower interest rate risk. You can see in a rising rate environment short-term bonds have held up much better than long-term bonds: 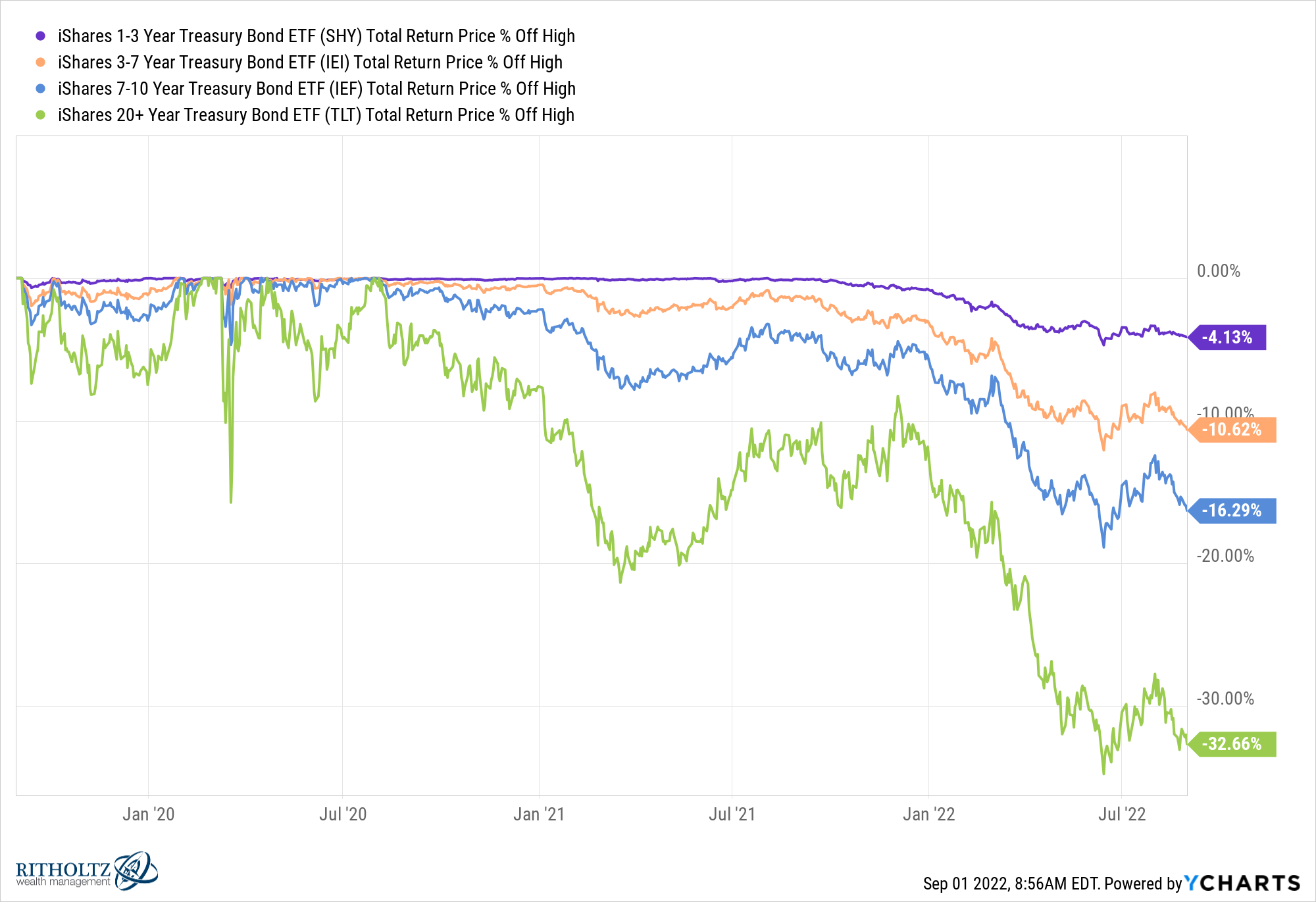 We’ve gone over this before but as a refresher, all else equal, the longer the maturity of the bond (or bond fund) the more variability to changes in interest rates. No one cares about variability when rates are going down because that’s a good thing for bonds.

But when rates are going up that’s bad for bond prices. The longer your maturity the greater the losses when rates rise.

For a number of years the yields on short-term bonds were paltry. Investors were forced to accept more risk to earn higher yields.

That’s not the case anymore.

The iShares 1-3 Year Treasury Bond ETF (SHY) now sports an average yield to maturity of 3.5%. That’s higher than the yield on a 30 year treasury bond (and my current mortgage rate…not to brag).

A yield of 3.5% is still relatively low compared to historical interest rates of the past 50-60 years but compared to the past 10 years it’s a huge upgrade.

On a tax-equivalent basis, municipal bonds offer a similar rate.

The iShares Short-Term National Muni Bond ETF (SUB) has a yield to maturity of 2.4%. If you were in the 25% tax bracket, the tax-equivalent yield on that would be 3.2% (assuming you’re holding these in a taxable account).

The online savings accounts are even finally starting to increase their rates. Marcus is 1.7%. Ally is 1.85%. Capital One is 1.75%. These yields should go higher if the Fed continues to hike.

You can’t exactly move to the beach and live off the interest on yields of 2-3% but it’s better than nothing, which is what savers could earn the past couple of years in a world of 0% interest rates.2

From an asset allocation standpoint, it will be interesting to see if cash catches a bid from investors. U.S. stocks and U.S. bonds are both down 12% or so in the past year: 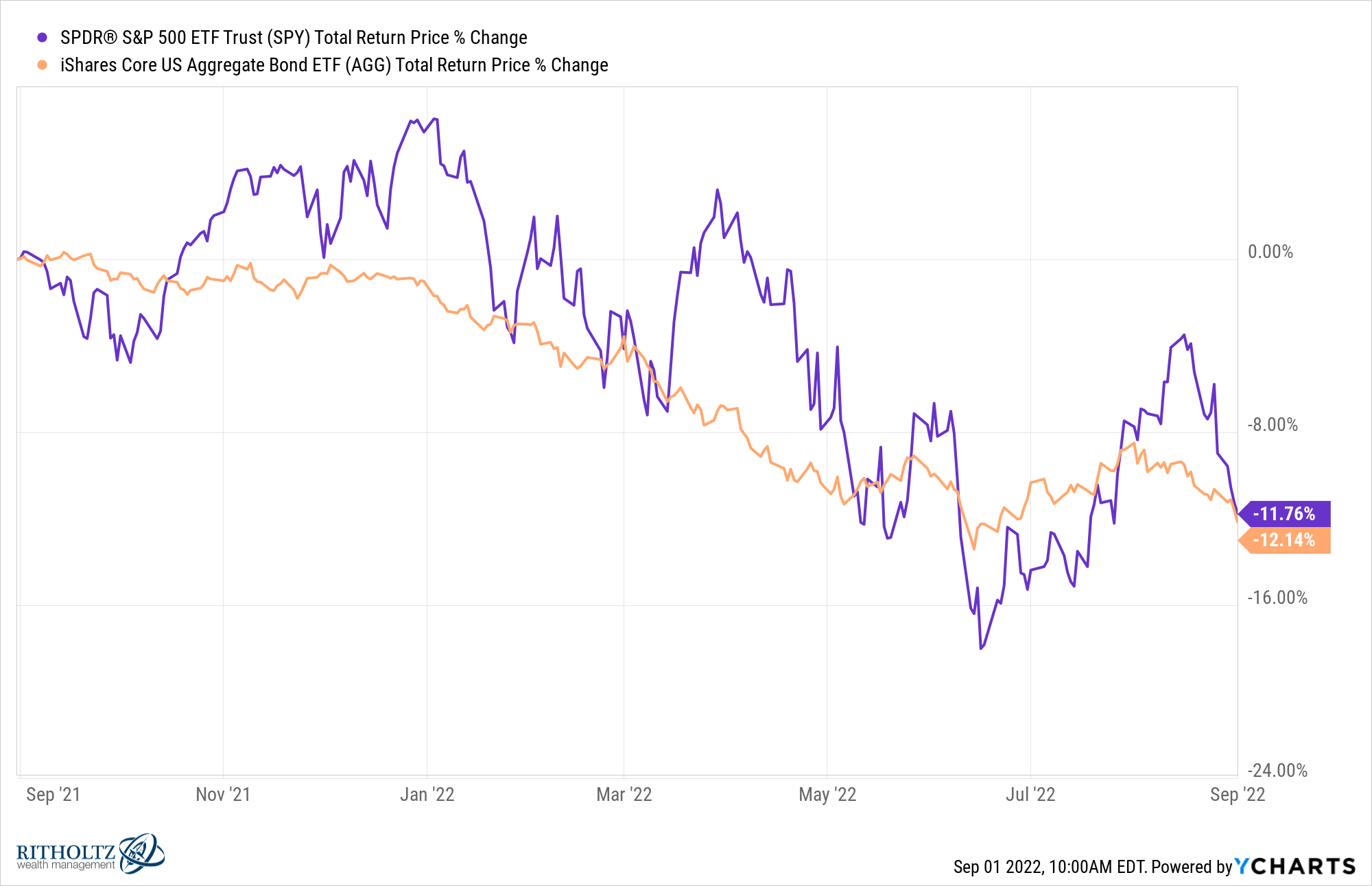 With short-term bonds and cash equivalents finally offering some yield it’s possible more investors will simply park their money there for a while.

Surprisingly, cash beats stocks and bonds in a given year more often than you’d think.

And cash has beaten both stocks and bonds in the same year 1 out of every 8 years, on average.

So it’s not out of the ordinary for cash to be king, at least in the short-term.

This doesn’t feel like a great thing for investors in risk assets right now.

But savers of the world rejoice. You can finally earn a decent yield on your cash.

Bill Sweet joined me as well to talk about going from two incomes down to a single-income family, pre-paying college expenses, rolling over a 401k to a Roth IRA, paying taxes in retirement, the tax impact of student loan forgiveness and more.

Further Reading:
Historical Returns For Stocks, Bonds & Cash Back to 1928

1With the Fed Funds Rate north of 2% (and going higher) and mortgage rates at 6% this should be illegal.

2High inflation doesn’t exactly help here either but these rates are a start.