One of the worst parts of the polarized nature of society now is many people have predetermined feelings about certain events.

The responses are becoming predictable.

The student loan forgiveness plan from the Biden administration is a case in point. People on both sides of this one are unwilling to see there are pros and cons here.

I don’t have strong feelings one way or another on this one but there are things I like and don’t like about the loan forgiveness itself and the discourse around it.

I don’t like how colleges and universities are getting off the hook. Forgiving the loans does nothing to help with the fact that the cost of higher education is out of hand. 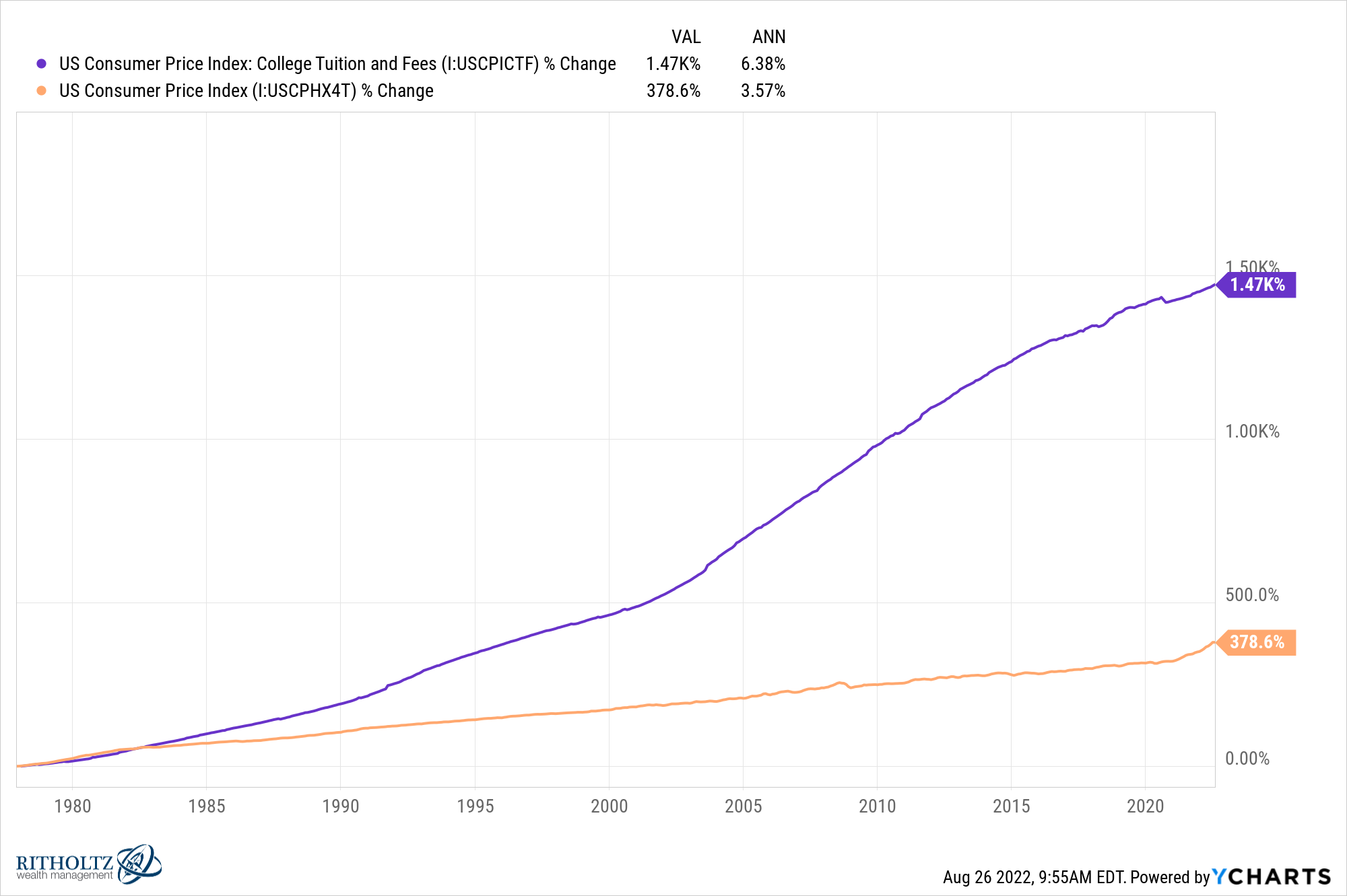 The cost of college is up exponentially more than CPI over the past 40+ years.

Forgiving the loans doesn’t solve the root cause of the problem here. If anything, this could make the costs worse going forward.

I wish there would have at least been some language around the potential for future bills to address the rising cost of higher education.

I do like the fact that younger people are finally being helped out by the government. It feels like the government has all but ignored people under 40 for years now in lieu of old people.

Young people these days have much higher costs for essentials across the board — student loans, daycare, healthcare, the high cost of housing — that previous generations simply didn’t have to deal with.

The Department of Education estimates that 65% of borrowers that are eligible for student loan relief are 39 and under.

I don’t like the fact that the government is still charging high interest rates on student loan debt.

I graduated from college with somewhere in the neighborhood of $20k-$25k in student loans. That was a decent amount back in my day but the interest rate I paid was only 2.5%, making the payments reasonable in relation to the debt load.

In fact, the interest rate was so low that I used the entire 15 year life of the loan to pay it off. There was no reason to pay it off early.

I don’t understand why student loan rates are so much higher now than when I graduated especially when you consider the government is the lender for the majority of these loans.

I’m sticking by my idea from last year that instead of loan forgiveness we should start by canceling the interest on these loans:

The average rate for existing borrowers is 5.8%.

A 5.8% interest rate on $1.6 trillion equates to $93 billion a year in interest payments for those paying back their loans.

The government owns 92% of all student loan debt.

Why does anyone need to make so much money on this debt? The government can effectively borrow at 0% short-term rates right now. Wouldn’t this be a good investment to make for future generations of workers?

The government can no longer borrow at 0% but borrowing rates were higher back when I graduated (2004) than they are now.

Someone is always going to be angry when something like this happens but wouldn’t the cancelation of interest on the debt be a fair compromise?

That way people still pay back what they borrowed but don’t fall behind because the government is charging egregious rates.

I do like the income cap on the forgiveness here. It’s not perfect but this isn’t bad: 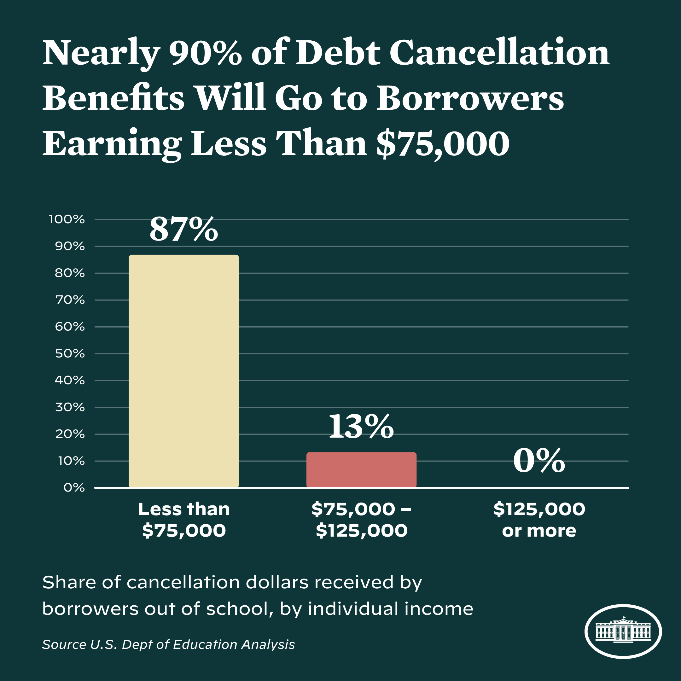 The $125k (individual) and $250k (for married couples) income caps do seem high considering those levels of earnings puts you in the 76th and 94th percentile of earners respectively.

My guess is they put the cap that high for the people who live on the coasts who will complain about the high cost of living and how low six-figure incomes don’t go that far.

But it nice there is some form of means testing here.

I don’t like rich old people complaining about young people getting handouts.

Give me a break.

I do like the potential psychological benefits this could provide to people who felt like they were stuck.

It’s estimated more than 43 million people will qualify to have some or all of their student loans forgiven.

I can’t back this up with data but I would guess the majority of these 40+ million people will be overjoyed with this news. Many of them will likely experience as much psychological relief as financial relief.

It could allow some people to buy a home sooner than expected. Or start a business. Or stress a little less about money.

You might not agree with how this relief is taking place but it’s OK to be happy for other people even if you’re not personally affected by this.

I don’t like the all-or-nothing nature of the discourse around this topic.

I paid my student loans off and it doesn’t really bother me that others are getting relief.

But I understand why some people are upset about this plan.

Isn’t this a handout?

Why not cancel $10k in debt (credit cards, auto loans, mortgage loans) for everyone who qualifies even if they didn’t go to college?

What about the people who already paid off their student loans?

I also understand why some people are happy about this plan.

Why not throw young people a lifeline?

Why do we expect 18-year-olds to be able to make a decision that could cost them tens or hundreds of thousands of dollars in debt?

Since when is any government program fair?

I can see both sides on this one but it makes sense why this is such a polarizing topic.

I guess we’ll just have to wait a few days until the next crisis du jour comes around so we can all argue about something else.