I am 38 and have accumulated a portfolio of index funds through years of investing. I was wondering if it makes sense to hedge it for downside protection, because a market crash can wipe out years of investing returns. Also what is probably the best method of doing it, long puts, short futures etc.? I want a good enough hedge and a perfect hedge doesn’t exist. I understand that hedging costs money and no guarantee that it may work as planned.

It is true that a market crash can wipe out years of returns from a bull market.

Bull markets are probably harder to define than bear markets because it’s difficult to know where to start them from. The bottom of the previous bear market? When a new all-time high is reached again?

There is no right or wrong answer so I’m just going with my own definition for the sake of this post.

The market recovered but high inflation plagued investors throughout the 1970s, leading to the infamous Death of Equities cover in 1979: 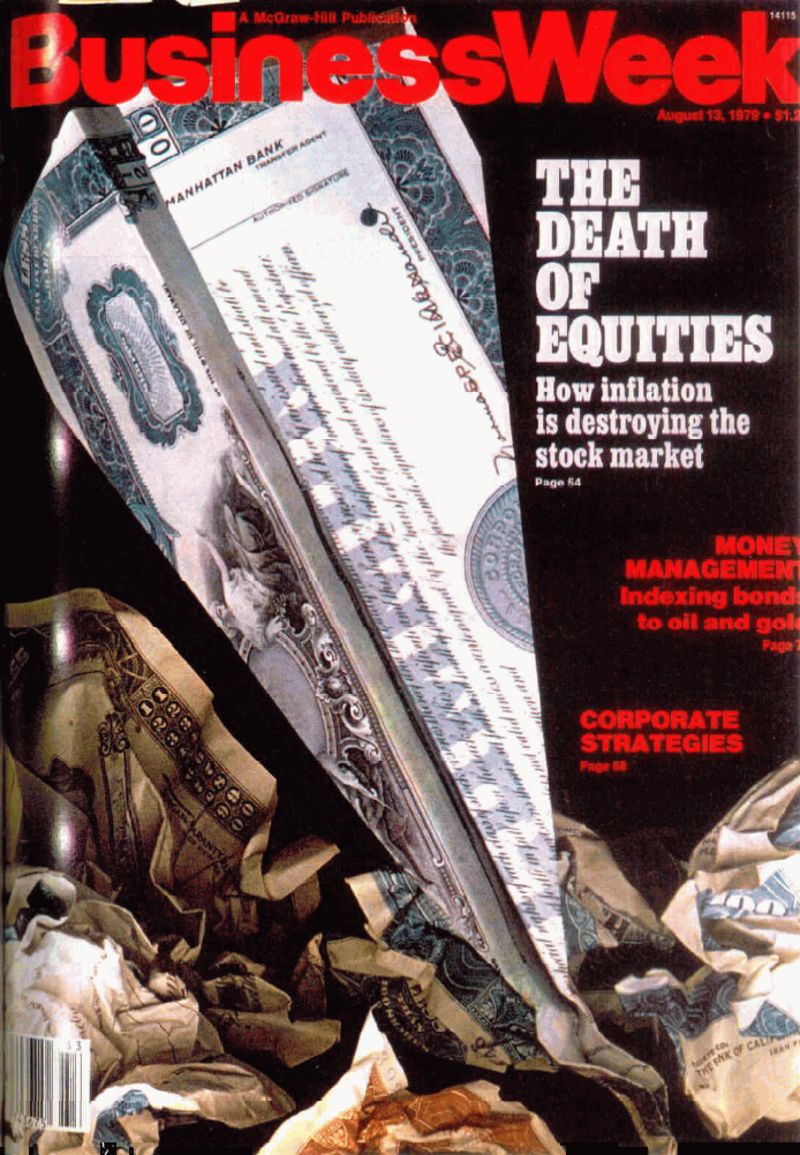 You could quibble with the start date of the next bull market. Some would say 1981. Others say it was following the 1982 bear market that finally ended the out-of-control inflation.

And it was followed by one of the worst decades on record.

And now we’re in a bear market again.

I don’t know if this will be THE bear market that breaks the cycle or just a bear market. Even those lengthy bull markets from 1947-1968 and 1980-1999 had plenty of corrections, recessions and bear markets along the way.

Here is a summary of the past three secular bull markets:

And here they are with the ensuing bear markets that knocked them down a peg:

It’s too early to say we’ve reached a full market cycle with the current iteration so I simply included that here to show how much of the gain has been knocked off.

The interesting thing to note here is that adding up a bull market with a bear market basically got you average returns in the past. Even after two bear markets in six years from the late-1960s through the mid-1970s, the stock market was still up 10% annually from 1947-1974.

Maybe this means we still have some downside to go in the current down cycle to get things back to normal. We’ll see.

But it’s always important to understand long-term returns include both wonderful bull markets and terrible bear markets. You can’t have one without the other.

As far as hedging goes, I understand the desire to hang onto some of your gains or take advantage when the market falls apart.

Options could help but you really have to know what you’re doing to implement a workable options hedging solution. You have to understand the pricing, how volatility impacts returns, the costs and the drag on returns to put that strategy to work.

It’s not as simple as buying a few options and sitting back while your portfolio is perfectly hedged against downside risk. You have to rebalance options positions dynamically to make it work. If you’ve never done it before, I would leave that up to the pros.

This is not the kind of strategy where you want to dabble.

You could also use managed futures, trend-following, commodities or some other alternative investment strategy.

The problem with employing any hedging strategy comes during a bull market. Everyone wants to hedge during a bear market but those hedges have to survive an up market too.

You just have to think of them as paying an insurance premium. Most of the time, the stock market goes up so you just have to make sure that insurance actually pays off when things go haywire.

It’s also important to understand you you can’t hedge out every risk in your portfolio. Risk can change forms but never goes away completely.

There are much simpler hedges out there than trying to use options or a tail-risk strategy.

These aren’t hedges you can brag about but they’re much easier to both implement and understand.

The best hedge for a 38-year-old is probably thinking and acting for the long-term by avoiding unnecessary mistakes in the short-term. You have decades ahead of you to save and invest.

Sometimes the best form of risk management is having enough liquid assets on hand to see you through the short-term so you aren’t forced into selling your risk assets during a bear market.

We talked about this question on this week’s Portfolio Rescue:

Blair duQuesnay joined me again this week to talk iBonds, asset allocation, financial planning during a bear market and more.