Pam lives in the midwest.

Four years later her house has increased 40% in value, meaning it’s now worth close to half a million dollars. Last year she refinanced her mortgage at 2.75% for 30 years and cashed out $50k in the refinance to put in some granite countertops, pay off her student loans and take a trip to Hawaii.

Not only is Pam wealthier because of her home price appreciation, but even after adding $50k to her debt her new monthly payment is nearly $200 lower than the original loan ($1,600 vs $1,430).

Jim rents an apartment in Boston.

The original lease for a one-bedroom, one-bath in Beacon Hill 2 years ago was $1,900 a month. When the time came to renew his lease this year, Jim’s landlord told him the new monthly payment would be $2,400 since that’s the new prevailing market rate.

Dwight and his wife Angela are first-time homebuyers living in Austin, TX. They have been saving for a 20% down payment for 4 years.

When they first started saving the median selling price for a home in their area was $376k. A 20% down payment on a home at that price point would have been around $75k.

Now that housing prices in the area have exploded higher, the median listing price of a home is $585k. To put 20% down would now require nearly $120k.

That’s an increase of 60% on the down payment and more than 50% on the monthly payment.

He sold his software start-up in 2020 and walked away with $15 million. He spent $6.5 million of that on a two-bedroom fixer-upper. His new Tesla cost more than $100k. Toby spends $35k a week on gas fees buying and selling NFTs.

His hobbies now include posting inspirational quotes on social media about start-up culture and paying $3k a ticket to sit courtside at Golden State Warriors games.

His biggest worry is hyperinflation and the coming destruction of the U.S. dollar. 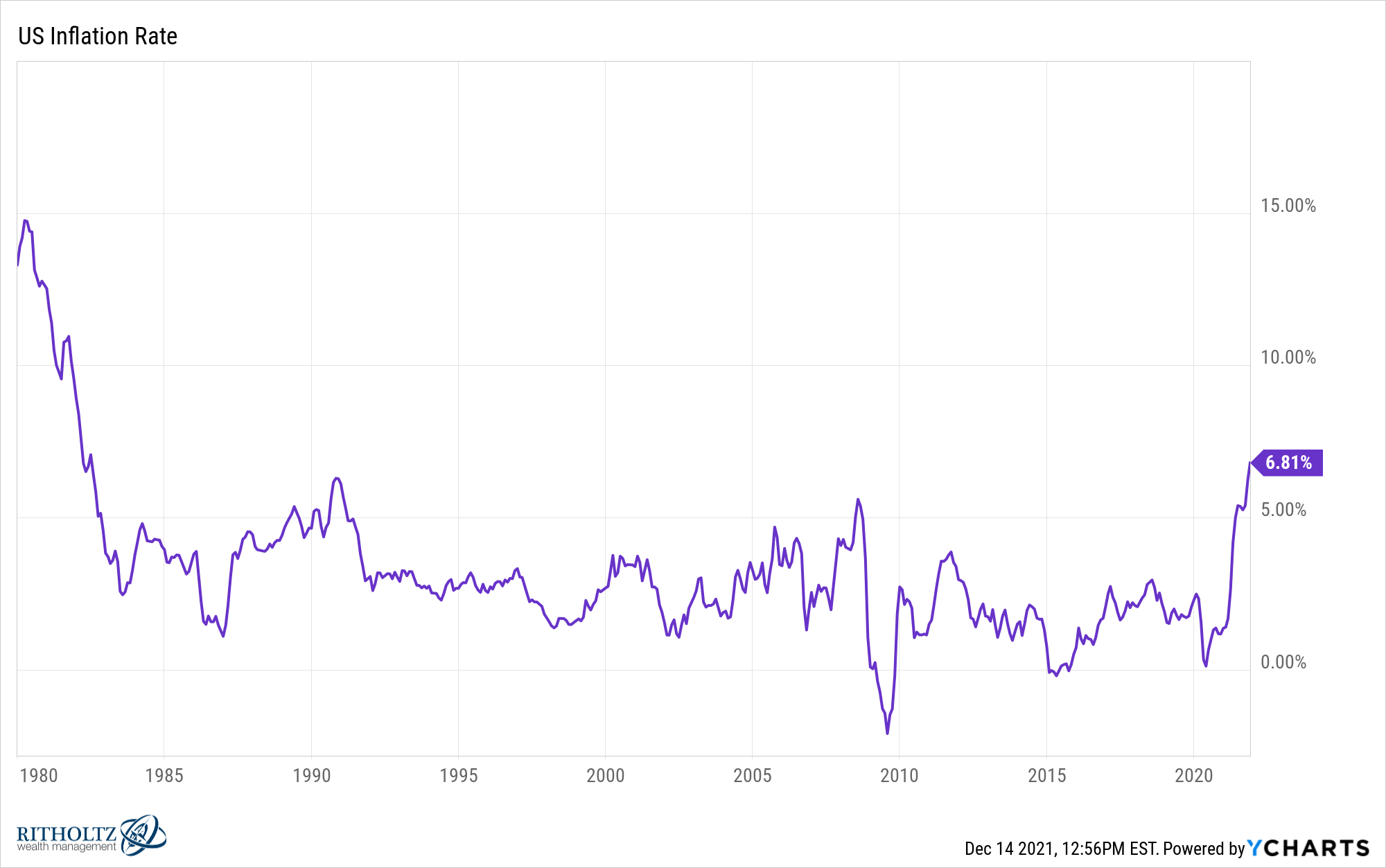 One of the cool things about the overwhelming amount of data we have available today you can dissect the current inflation rate down to its individual components.

Shelter carries a one-third weighting of CPI according to the BLS. As you can see from my examples, each household’s circumstances will lead to a wide range of personal inflation rates around the national average.

If you’ve been a homeowner for more than a few years, you’ve basically experienced deflation in your housing costs.

Housing prices are up, home equity is through the roof and mortgage rates have fallen: 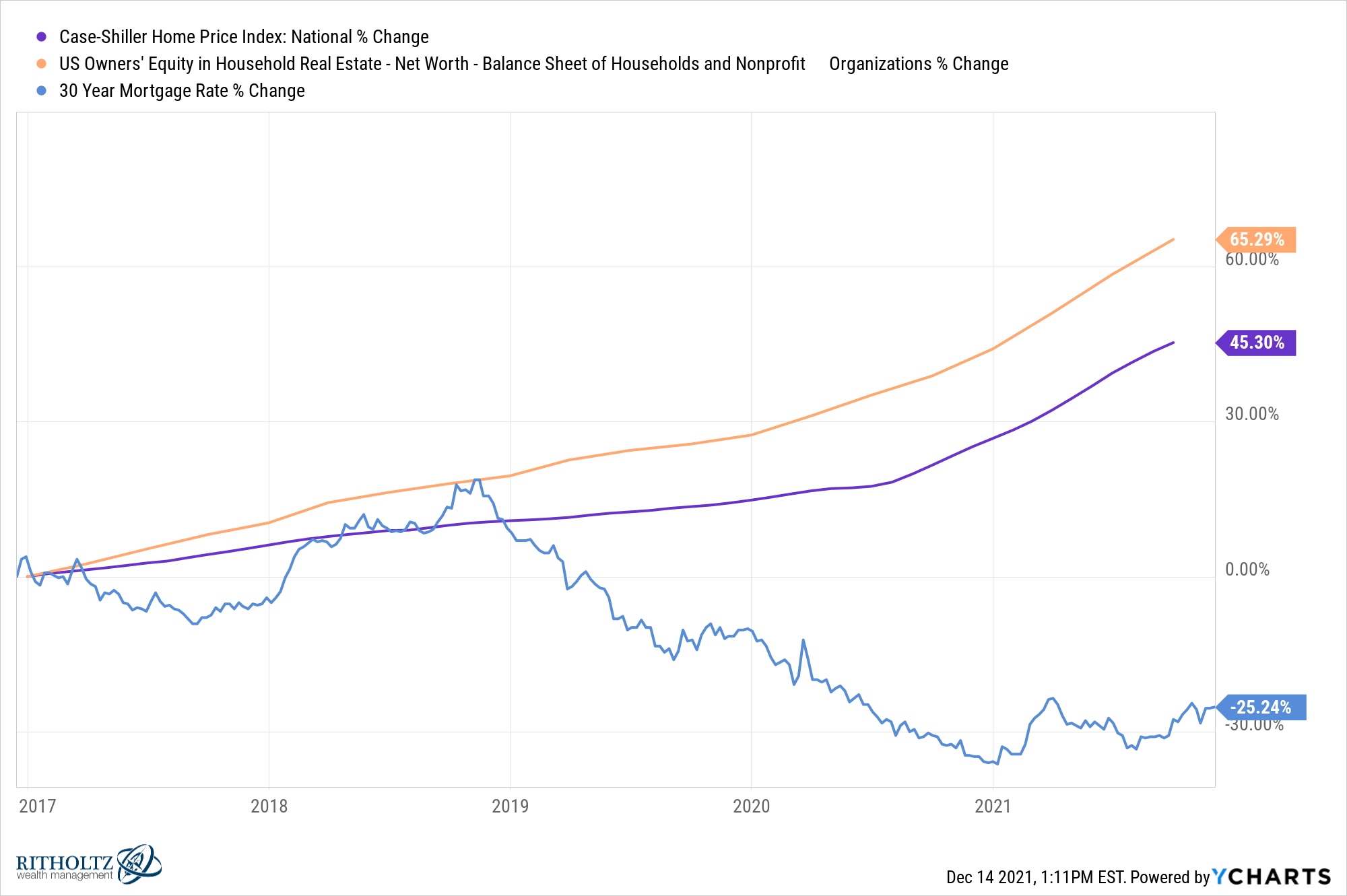 And we haven’t even considered the fact that rising inflation makes your fixed monthly payment lower over time.

Just look at the debt profile of homeowners in the United States: 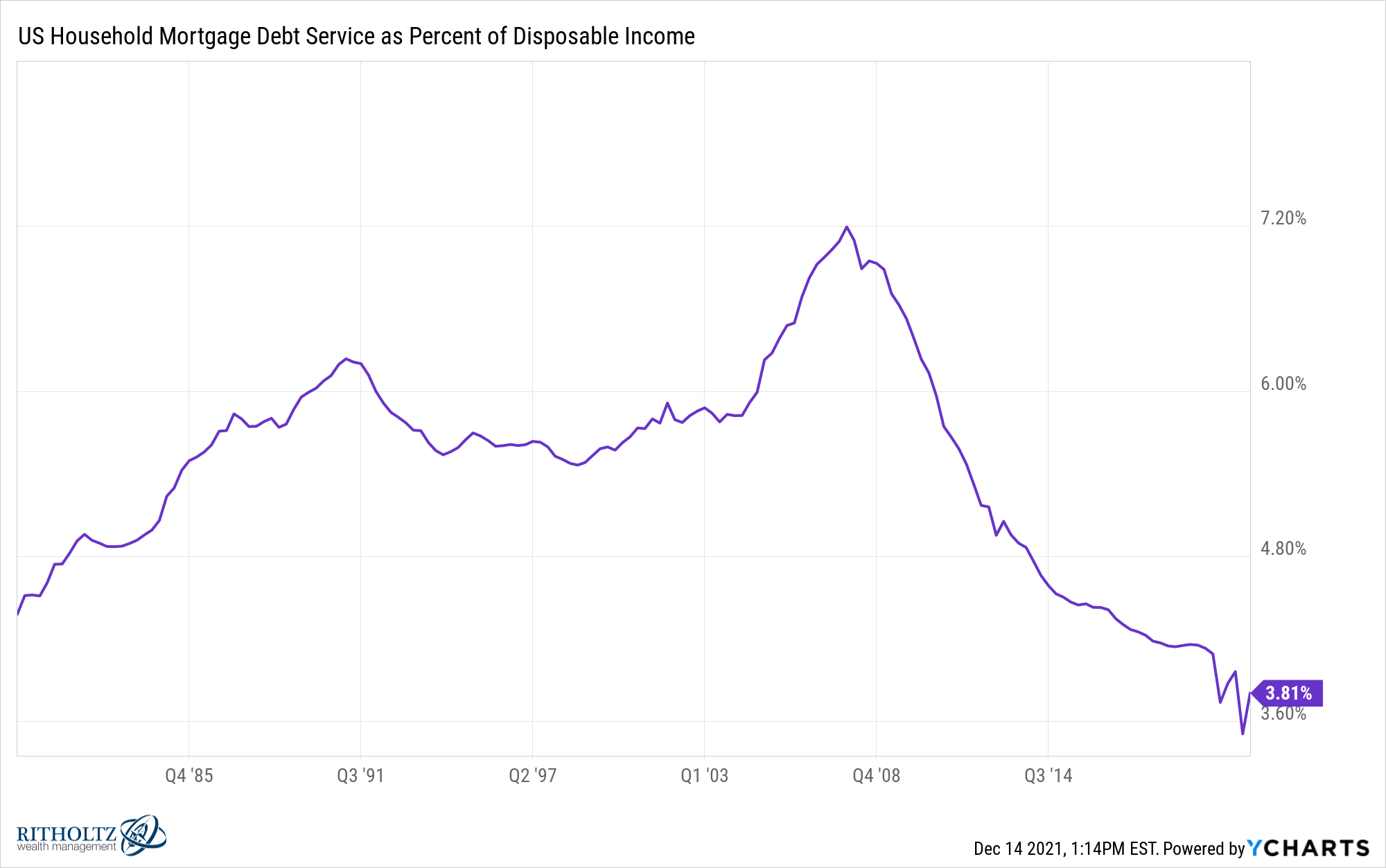 You could argue the homeowner has never had it better than they’ve had it this past cycle.

But what if you’re a renter?

After a brief dip at the onset of the pandemic, rents are playing catch-up with housing prices in a hurry (via Bill McBride): 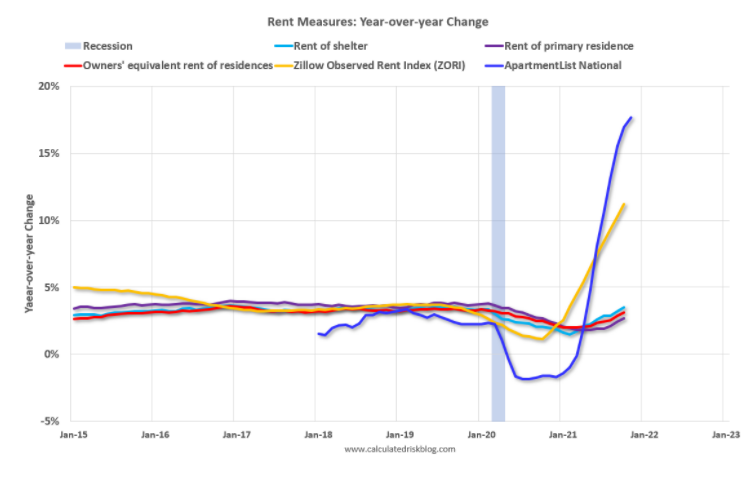 And what about first-time homebuyers?

Let me count the ways on how awful the past 18 months or so have been for those looking to purchase their first home:

And if you live in a desirable location, even if you’re wealthy by any reasonable standards, it probably doesn’t feel like it with so much competition from other wealthy people. Right or wrong, we judge ourselves on a relative basis.

Add it all up and we live in confusing times, economically speaking.

Housing is the biggest cost for the majority of Americans. We all have to live somewhere.

The pandemic has made inequality in the housing market even worse than it was before.

If you owned a home prior to 2020, you’ve made out like a bandit, with higher asset values and lower debt payments. If you’re in this situation, consider yourself lucky.

But if you’re in the rental market or trying to buy your first home, you’re experiencing a painful bout of inflation.

Beyond a sudden surge in homebuilding, I don’t see what changes this equation.

Further Reading:
Has There Ever Been a Worse Time to be a Homebuyer?