So on Monday I wrote the following about my experience getting shares in the Robinhood IPO:

After the company priced out the IPO but before it would go live to trade I received word all 100 shares had been filled at a price of $38/share.

This was not great news for my prospects of a big first-day pop.

Shares were far from oversubscribed. In fact, Robinhood says just 20-25% of shares went to its customers, far short of the 35% ceiling. And the fact that the price came in at the lower end of the initial price range told me it wasn’t in high demand.

It was at this point I mentally kissed my first-day pop profits goodbye.

It’s possible I’ll live to regret this decision but the company, and therefore its stock, is far too volatile for my taste. So I decided to sell it the next morning. I lost a few hundred dollars but the plan was never to hold this stock for the long run.

To summarize, I was allocated shares of Robinhood the day they went public. I was looking for a huge bounce that first day that never came. So I sold the shares.

That was last week Friday, a day in which shares finished the day up around 1%.

Then Monday the stock was up more than 7%.

On Tuesday, it rocketed 24% higher.

And on Wednesday, Robinhood went full meme stock, rising as much as 65% at one point. It finished the day with a gain of 50%.

Here’s a live look at me after this ordeal:

Somehow I was both kind of right and ridiculously wrong about Robinhood all on the same trade.

The problem is I was right on paper and wrong in my portfolio.

Earlier this year I pounded the table predicting Robinhood would be bigger than Coinbase once they went public.

Here’s Michael laughing at me for this prediction last week Thursday. 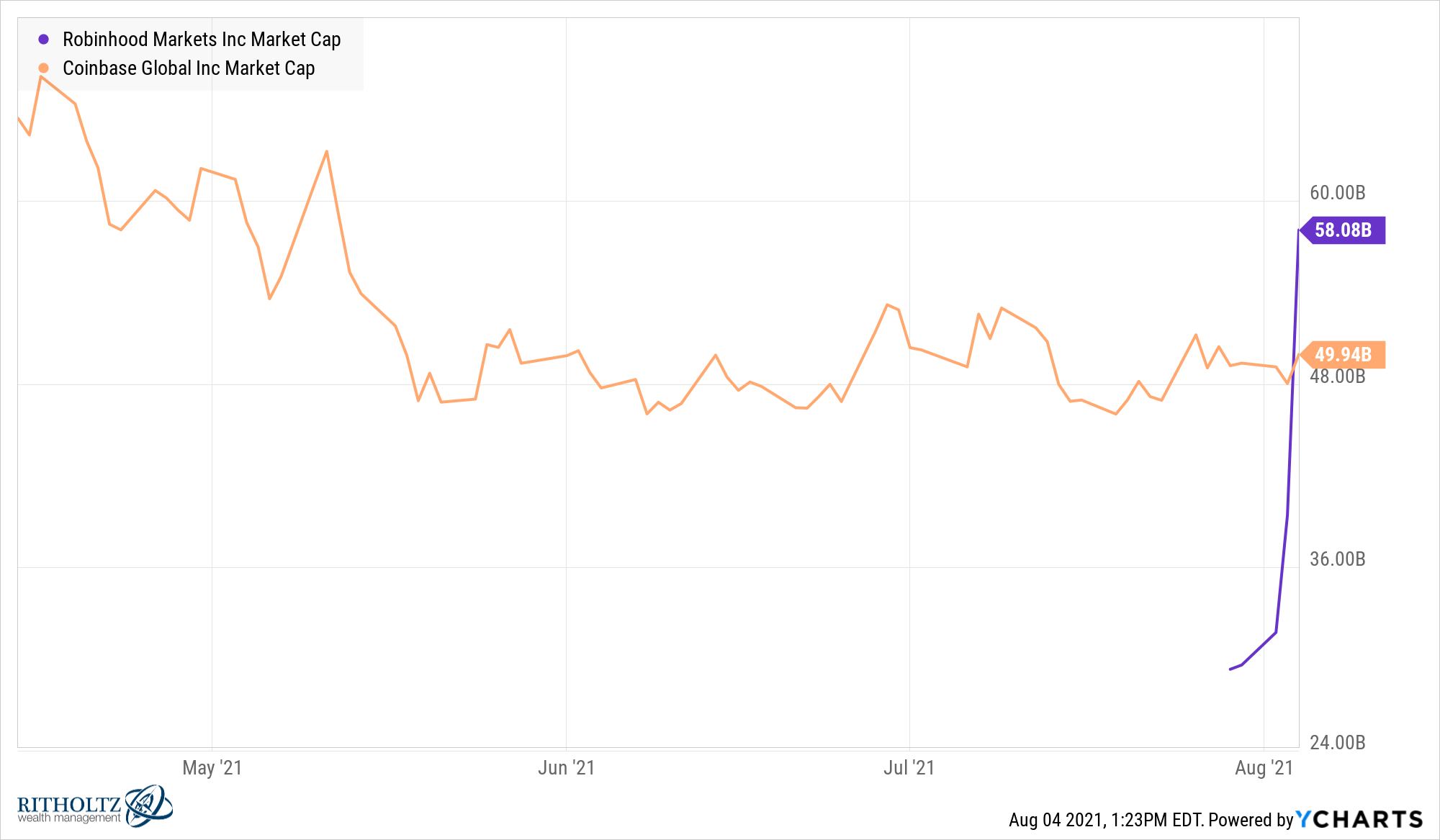 I guess that’s a moral victory?

My prediction was right but I didn’t make any money on it.

Now, I should be kicking myself for selling Robinhood shares last week but here’s my general feeling about this one:

You may not believe me but this one doesn’t sting as bad as it probably should. I simply don’t have the personality to hold a meme stock like this. In fact, I’m 100% sure I would have sold my shares on Tuesday went it was up more than 20% anyway had I actually held on after the IPO.

This was basically an experiment on my part but I did learn some valuable lessons from my first (and last) time trying to flip an IPO:

Michael and I have been talking about Robinhood for years now on the podcast but our coverage of the company has really ramped up the past year-and-a-half or so. So we couldn’t help but hop on Twitter Spaces yesterday to discuss my rollercoaster ride with the company.

We decided to record this short conversation and put it on the Animal Spirits feed.

Contact us at animalspiritspod@gmail.com with any questions, comments, feedback or recommendations.

Check out our t-shirts, coffee mugs, stickers and other assorted swag here and here.