A lot of fintech companies these days talk about how they’re going to “democratize” finance.

I don’t think many of them are actually doing this.

Say what you will about some of their tactics but Robinhood has done a decent job of living up to this tagline. More than half of their 18 million customers said Robinhood was their first-ever brokerage account. And half of all new retail funded accounts opened in the U.S. between 2016 and 2021 were done so on Robinhood.

Their IPO Access platform was another step in the right direction.

In the past, you basically had to have a relationship with a huge brokerage firm to access IPO shares at IPO prices.

This was important not only for bragging rights on the golf course but also because that’s historically when IPOs offer their best returns.

I wrote about this a few years ago using data from IPO expert Jay Ritter:

Here’s a chart with some more numbers on the first-day pop phenomenon: 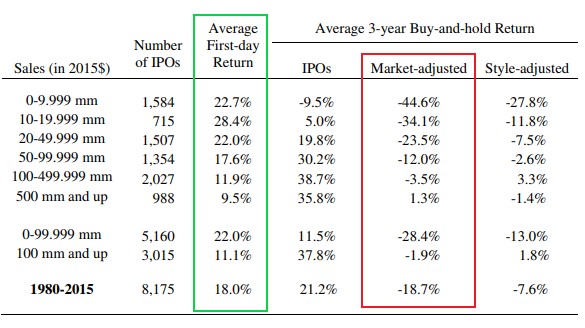 If you want to make some short-term profits on IPO shares you had better get in at the IPO price. By the time the shares are available to the public, it’s usually too late.

I am a long-term buy-and-hold investor so getting in early on IPO shares doesn’t really do it for me.

But since I have some fun money in a Robinhood account and the company said they were allocating up to 35% of its IPO shares to customers I couldn’t resist. So I decided to give Robinhood’s IPO Access platform a test drive to see how it works with actual shares in the company itself.

My plan going into it was to treat this as an experiment. I didn’t want to hold the shares for the long-term. I was only there for a potential first-day pop. If it happened, I would sell at a profit. If it didn’t happen, I would sell at a loss.

Here’s how it worked:

A couple of days before the IPO I put in a request for 100 shares. They gave me a price range of $38-$42 a share with a max price of more than $50/share if demand came in stronger than anticipated. 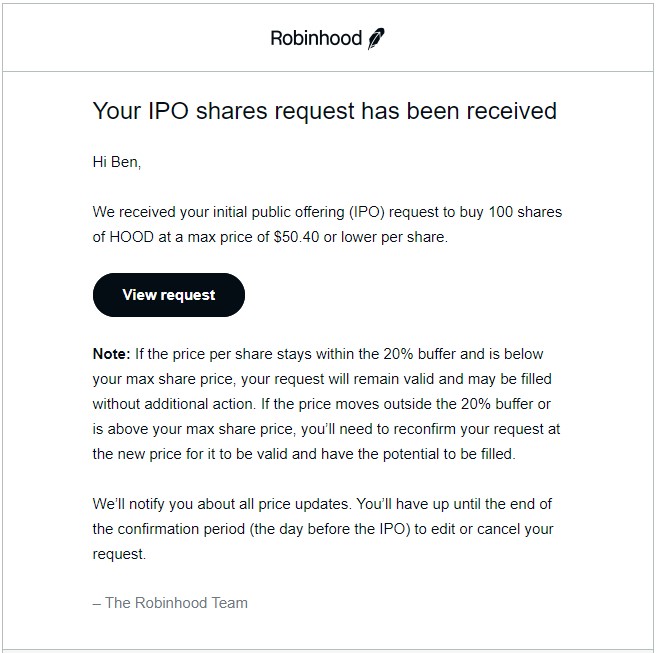 After the company priced out the IPO but before it would go live to trade I received word all 100 shares had been filled at a price of $38/share.

This was not great news for my prospects of a big first-day pop.

Shares were far from oversubscribed. In fact, Robinhood says just 20-25% of shares went to its customers, far short of the 35% ceiling. And the fact that the price came in at the lower end of the initial price range told me it wasn’t in high demand.

It was at this point I mentally kissed my first-day pop profits goodbye.

When shares hit the open market on Thursday afternoon they immediately tumbled: 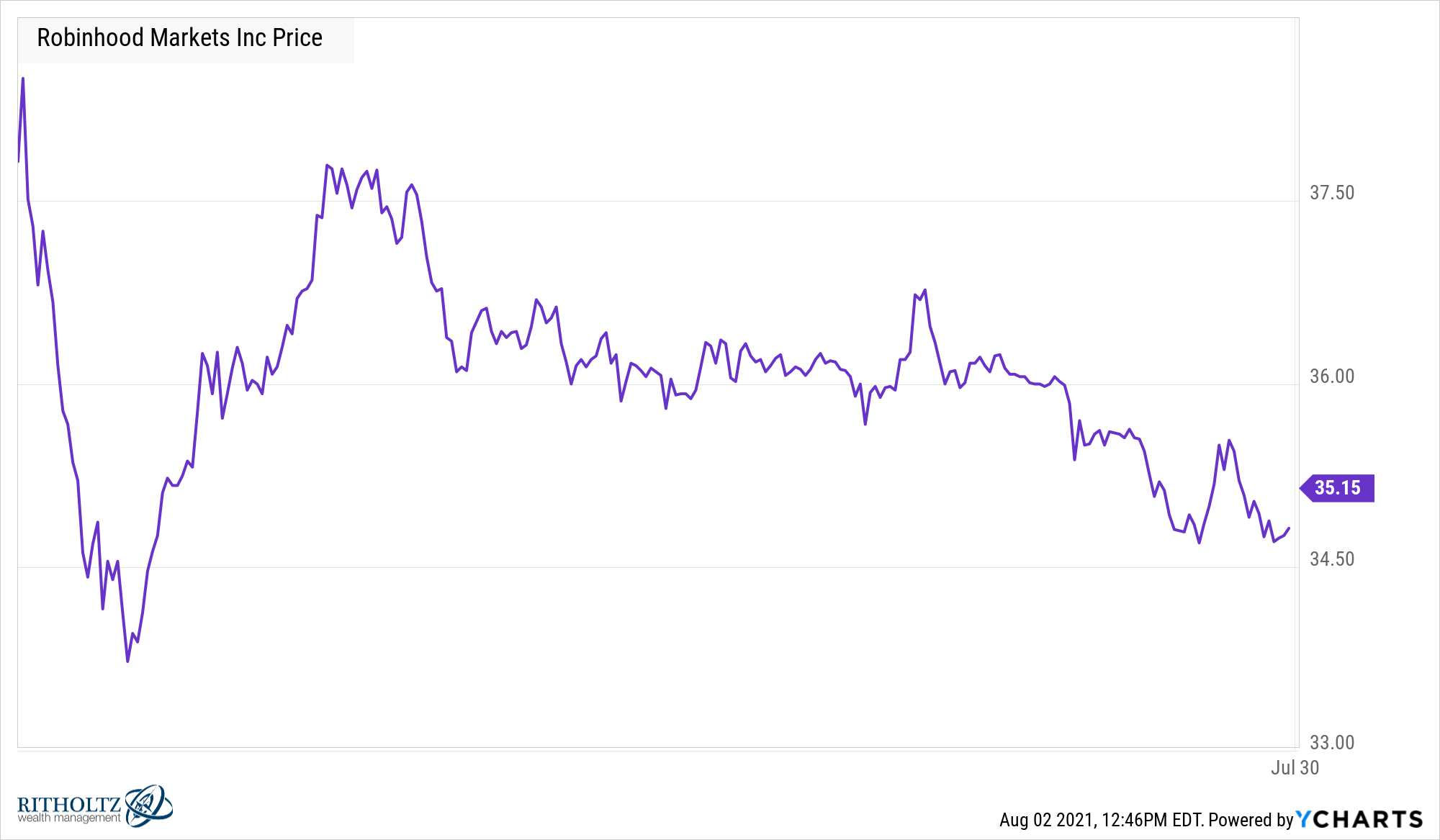 At one point the stock was down more than 12% and finished the day down almost 9%.

It’s possible I’ll live to regret this decision but the company, and therefore its stock, is far too volatile for my taste. So I decided to sell it the next morning. I lost a few hundred dollars but the plan was never to hold this stock for the long run.

Interestingly enough, they hit me with the following warning before I tried to sell my shares: 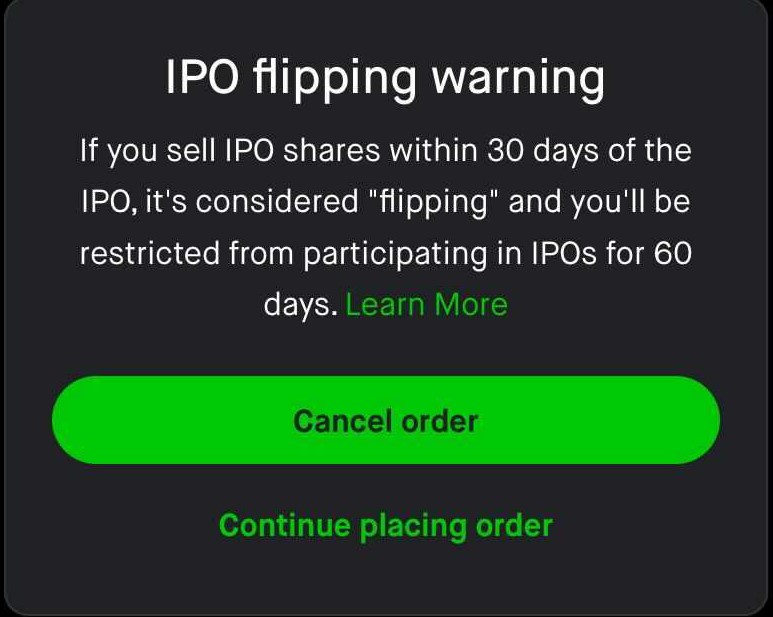 I actually don’t mind they did this.

When you can easily trade with the click of a button or the swipe of a finger, it can be useful to have checks and balances in place. I hope Robinhood does more of this in the future.

Are you sure you want to place this options trade that could instantly lose you thousands of dollars? Have you taken the time to understand how options work?

Are you aware of the tax ramifications of short-term trading within your account? Have you set aside $X dollars for your tax bill at year-end?

Really? Another meme stock in your portfolio? How about an index fund?

Are you sure you want to buy a cryptocurrency that was literally created as a joke in a matter of hours?

Democratizing finance is great and all but democracy doesn’t work all that well if you don’t have some guardrails in place to help keep people honest.

Alas, this will likely be the last time I use IPO Access but that would have been the case even if I made some money.

Boring old long-term investing is much more conducive to my personality and investment plan.

Check out Josh, Michael and I discussing the Robinhood IPO and more on The Compound and Friends the day this all went down:

Michael took far too much enjoyment in me being wrong but those are the breaks.