The Case-Shiller National Home Price Index is up 15% year-over-year through the end of April.

Not nearly as bad.

Depending on your vantage point, housing price increases seem either incredibly bubbly, below average, average or strong-to-quite-strong.

But if we’re talking about just the past year or so, it’s undeniable home prices are going bananas. Price gains are actually stronger now than they were during the housing bubble.

Len Kiefer from Freddie Mac looked at the 24-month price change in housing prices through May 2005 and May 2021 to see how many states showed price gains of 20% or more over a 2-year period:

Back then it was mostly coastal. Now it’s national.

You might look at these numbers and assume the speculation must be even crazier than the housing bubble of the aughts. Is it time for Michael Lewis to get started on The Big Short 2: The Housing Shortage?

The infamous story from The Big Short everyone cites was a strawberry picker in Bakersfield, California who had an income of $14,000 yet managed to secure a loan for $724,000.

Lewis would have a harder time finding as many crazy stories this time around.

This week Ali Wolf wrote how homebuyers are far more financially sound, with 73% of mortgages in the first quarter of this year secured by people with credit scores of 760 or above. Look at how this number has been trending higher ever since the last housing bubble: 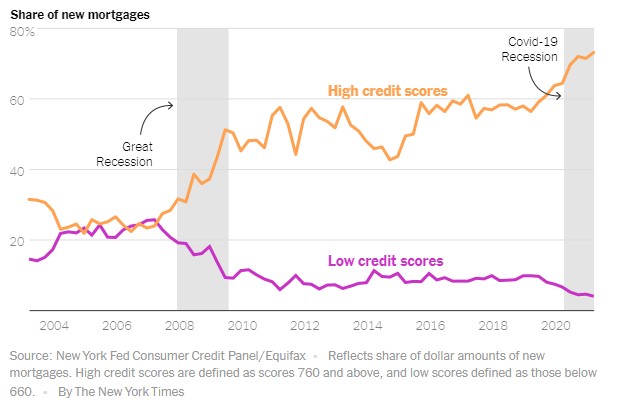 Now look at how much better shape households are in terms of being able to service their mortgage debt:

This data goes back to 1980 and it’s now at its lowest point ever. This number peaked in the fourth quarter of 2007 right before the financial crisis and is now 50% lower.

Freddie Mac recently shared some numbers to show how low rates have helped save people money through refinancing:

Mortgage debt makes up around 70% of total U.S. household debt in the United States so it makes sense that overall debt service as a percentage of disposable income is also as low as it’s ever been:

This number is roughly one-third lower than it was following the onset of the housing crash. U.S. households have spent the past 12 years shoring up their balance sheets and are arguably are in better shape financially than they’ve ever been.

There are other differences between now and the housing bubble.

From 2000-2007, the 30 year fixed rate mortgage averaged 6.5%. The average from 2012 until now is just 3.8%. Even if rates were to scream higher from here, the majority of the country has spent the past few years refinancing or buying at or near record low mortgage rates.

It’s hard to overstate the impact this can have on a household’s budget.

Back then many people were taking out interest-only loans that would reset when rates went higher. Today, the majority of people buying a new home are locking in low rates through fixed rate mortgages or paying cash.

There aren’t nearly as many people pulling cash out of their homes this time around either: 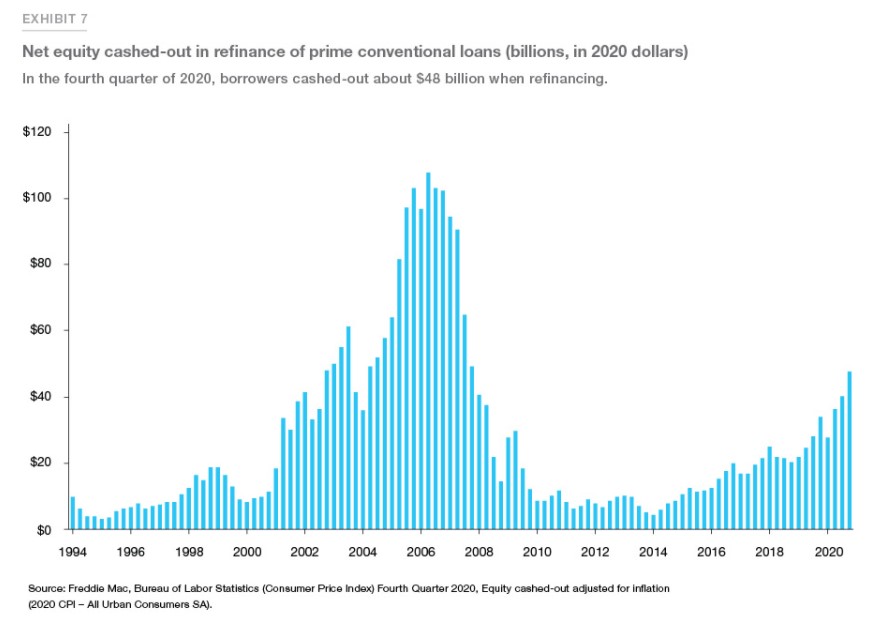 This doesn’t look like a bubble to me. It looks like a housing shortage, a demographic wave and a pandemic-induced buying frenzy but not speculative excess.

Having said all of this, it’s still reasonable to worry about home prices. How could you not be worried?

Low rates are winning the fight against rising prices but it would not be healthy for housing to continue rising at its current clip. It would be nice to see more inventory come online to the housing market, more houses built and fewer bidding wars for the houses that are available.

This will all come with time but it would be a mistake to assume housing prices are going to crash just like they did last time.2 For once, Americans are richer coming out of a recession than they were going into it.

It’s important to remember you can’t look at a single variable — price — to make your housing decision.

Yes housing prices are a factor but so are interest rates, taxes, how long you plan to stay in the home, the ancillary costs of homeownership, your budget, your income and so on.

The housing market plays a large role in shaping the macroeconomy.

But your personal decision to buy a home or not should be based on your own personal finances, not some macro forecast about housing prices.

1Some of those east coast states are so tiny. Maybe they should just merge some of them.

2And potentially higher mortgage rates if that ever happens.