Harry Dent is at it again, predicting the worst year for the stock market in our lifetime in an interview with ThinkAdvisor. 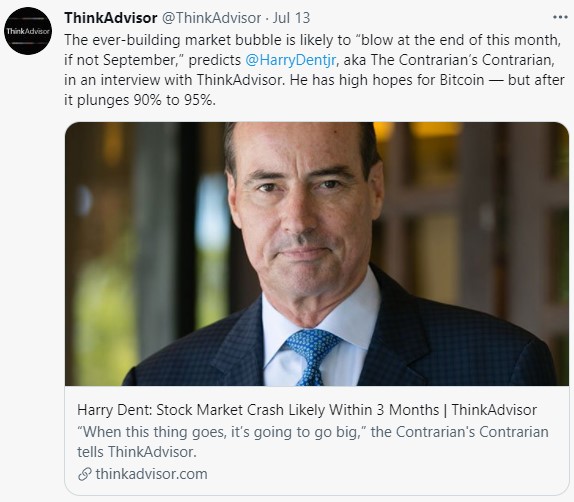 The great thing about the Internet is we have the ability to look at the track record of the person making outlandish claims to see if it makes sense to give credence to their predictions.

Dent made a nice call in the mid-1990s for a coming boom that came true.

It’s been all downhill from there with a series of boom and bust calls that have been on the wrong side of history. 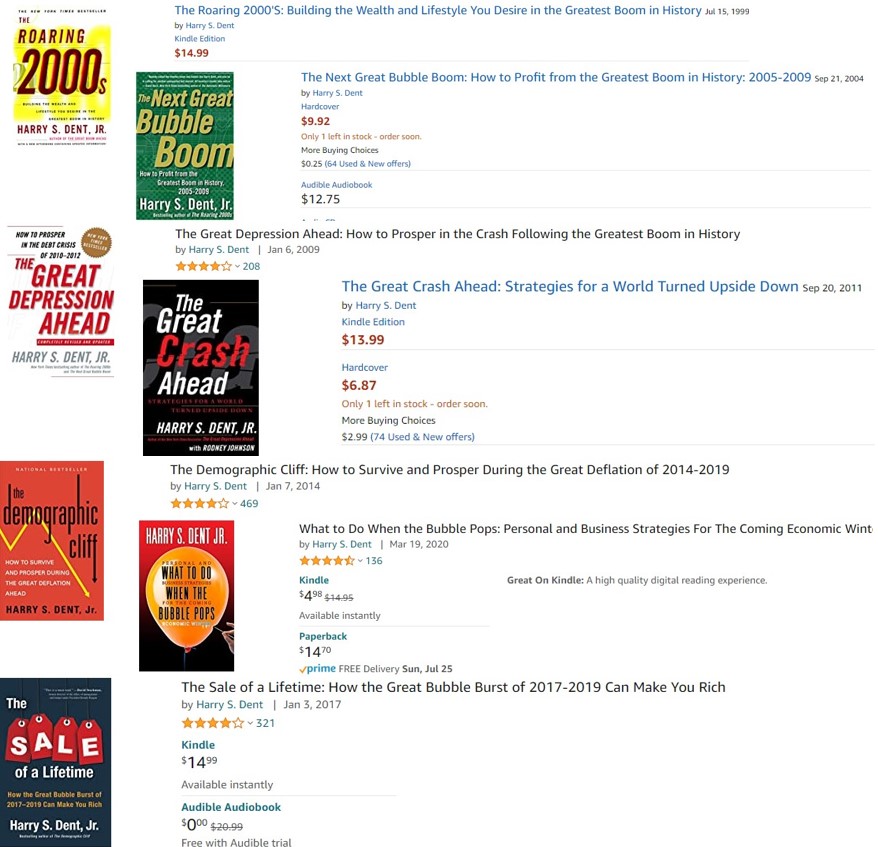 The most depressing part of these books is not how wrong they all were but how many 4 and 5 star reviews they have from readers.

I’m not actually sure if Dent believes each one of his predictions but his latest interview provides some clues as to how the most preeminent market soothsayers are able to make market crash predictions over and over again.

Here’s how to predict a market crash without ever admitting you were wrong if it doesn’t come true:

Give a specific date for the crash. Dent says the stock market will see 80% of its value wiped off the map by this fall:

It takes just “one extra snowflake to start an avalanche — and boom!” Indeed, according to Harry S. Dent Jr., aka The Contrarian’s Contrarian, flurries could come in July: The ever-building market bubble is likely to “blow at the end of this month, if not September,” predicts Dent in an interview with ThinkAdvisor.

Stocks have no place in investors’ portfolios, he argues, forecasting that most equities will plummet 80% by autumn.

Giving a specific date and a specific level of the crash are key here because it makes it seem like you can predict the future. This is an irresistible combination for those searching for answers about what comes next.

The bigger the crash the better. Calling the timing of the crash is not enough to garner headlines and investor attention. Plenty of people do that these days. The best stock market prophets know how to use one-upmanship to get their message to the masses:

“It will be the biggest crash of our lifetime,” he predicts. “The worst year for the stock market in our lifetime is likely to be around the end of 2022 and for the economy, 2023.”

It’s not just a crash. It’s the biggest crash and the worst year for the stock market of our lifetime.

Remember, the scarier the better.

Make people feel dumb for not seeing what you’re seeing. Predicting a crash is not only about making yourself sound smart but also about making anyone who doesn’t agree with you feel dumb:

Investors remain “bullish longer term, but the economy keeps telling us things aren’t as good as they used to be. “

Can’t argue with that logic.

Move the goalposts when you’re wrong. Once you’ve gone out on a limb with a prediction for a crash with a specific time frame in mind, eventually you have to pay the piper. Either you’re right or you’re wrong.

And since market crashes are fairly infrequent, if you keep predicting one you’re going to be wrong way more often than right.

You have two options when you make a prediction that turns out to be wrong:

Let’s see which one Dent went with since he’s been predicting “the biggest crash ever” for years:

You told me in an interview this past March that “the biggest crash ever” would likely occur by the end of this June. What are your thoughts on why that didn’t happen?

It’s the same old story: We’ve been rebounding since COVID crashed us in March of last year. The stimulus was off the reservation! The central banks said, “We’ll triple down.” But that stresses the system: not letting the economy rebalance, not washing out zombie companies. Twenty percent of large public companies can’t meet their debt service.

So it was massive stimulus and the natural recovery — [Americans] had to hold back [spending] for months. So now we have this bounce.

Governments will keep this bubble going no matter what. So the question is: When does it blow?

Ah yes, the time-honored tradition of blaming the Fed for your ill-advised predictions. It’s almost like some pundits would like to invest as if central banks don’t exist, when in fact, they do.

He came up with five excuses experts make on a regular basis when their predictions don’t work out:

(1) The “if only” clause: If only this one thing would have gone my way I would have been right.

(2) The “ceteris paribus” clause: Something completely unexpected happened so it’s not my fault.

(3) The “it almost occurred” clause: It didn’t happen but I was close.

(5) The “don’t hold it against me” clause: It’s just one prediction.

And of course, when the market does inevitable crash, be sure to take credit for your broken clock prediction.

Michael and I discussed Dent’s history of ill-timed books and more on this week’s Animal Spirits video:

Further Reading:
How to Sell Finance Books Like Harry Dent

Sorry I was on vacation earlier this week so no reads. Enjoy your weekend!