Switzerland was down 3-1 with just 5 minutes to play, scoring two goals in the final minutes to force overtime.

After no goals in the sudden death period, the game went to penalty kicks, which Switzerland won 5-4 on a beautiful diving save by goalie Yann Sommer on the final try from Mbappe:

If you watch all 10 penalty kicks you begin to notice a theme in the strategy by the goalies — they like to dive. In fact, each goalie dove on every penalty kick attempt. And as luck would have it, this strategy worked on the very last kick.

I’m not exactly a soccer expert, but there are a few obvious reasons the goalies dive like this.

The striker has the advantage since the goal is so large and they get to kick from a relatively short distance. And since they can kick the ball with such force the goalie has to make a split-second decision.

But it also looks really cool.

Saving a ball that’s kicked right at you is boring. A diving save, on the other hand, makes you look like a hero. And so it was in yesterday’s match. 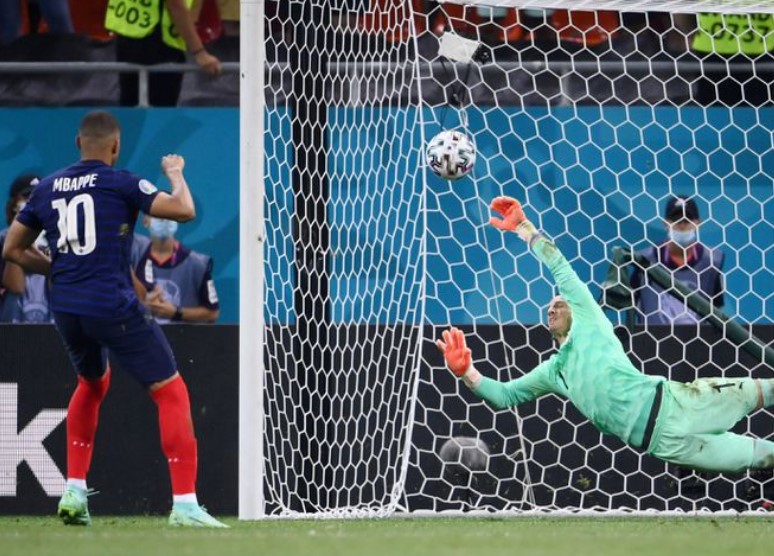 It’s hard to argue with this strategy considering it won Switzerland the game.

There is an alternative to the horizontal diving save, though. The goalie could simply stay put in the middle.

Researchers in Israel studied nearly 300 penalty kicks from various leagues and championship matches over the years to gain a general sense of the strategy for both goalies and strikers.

They found the goalkeeper dove left or right nearly 94% of the time, meaning the other 6% of the time they basically just stayed in the middle hoping the kick would come right down the pipe.

As you can see from the distribution of kicks, the strikers went down the middle far more often than the goalies stayed put: 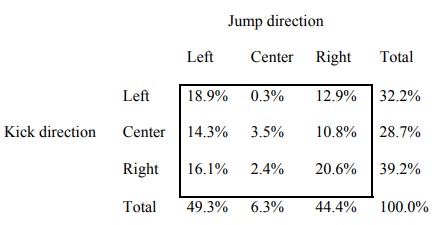 Strikers kicked the ball right down the middle nearly 30% of the time.

There is obviously a lot of psychology in these numbers and it’s hard to pinpoint the exact difference this would make, but these researchers figured the save percentage would roughly double if they just stayed in the middle around one-third of the time.

If this were to happen it would likely change the strategy for the striker, a little like rock-paper-scissors but this is a fascinating study in human nature.

Strikers were five times more likely to kick it down the middle than goalies were to stay in the middle waiting for a direct kick.

We humans simply have a bias towards action over inaction.

Goalies admitted they felt worse about themselves if they stayed put in the middle and there was a goal kicked to the right or left. It’s easier to stomach a ball kicked right down the middle if they dove left or right because it showed their effort.

We want to have our hands on the steering wheel to give us a sense of control, even when that control is an illusion.

The illusion of control applies to investing as well.

Successful investing tends to be boring and long-term in nature but it’s hard to look cool with a boring, long-term strategy. Where’s the fun in that?

A bias towards action at all times when investing opens you up to all sorts of mistakes, many of which are of the avoidable or unnecessary variety.

It used to be that action would cost you money in terms of trading costs but now that those are more or less off the board, the bill for increased activity is solely measured in behavioral costs (and taxes).

With market cycles speeding up this bias towards action will likely only increase in the future. Patience is a virtue no one has time for anymore which will lead to even more action from investors and traders alike who don’t have the tolerance for a wait-and-see approach.

Getting rich overnight has always been appealing to a certain subset of the population but it seems the information age has shifted this mindset into overdrive.

Doing nothing is still a decision.

As long as you have a plan in place to guide your actions, and that plan tells you to sit on your hands, it’s often the best decision you can make as an investor.

Further Reading:
The Case For Having a Fun Portfolio