Some market-related stats I’ve been compiling for a while:

Most of the time stocks beat bonds over the long-term but not always.

The bond bull market since the early-1980s is a historical outlier unlike anything we’ve ever seen or will see again in the future.

3. Long-term bonds lost more than 50% of their value after inflation from 1950-1981. This was the opposite of the current bond bull market. It was a time of high inflation and rising rates.

On a nominal basis bonds were still up so this was all inflation eating away the returns.

This helps explain why Japan has returned roughly 1% per year ever since then. 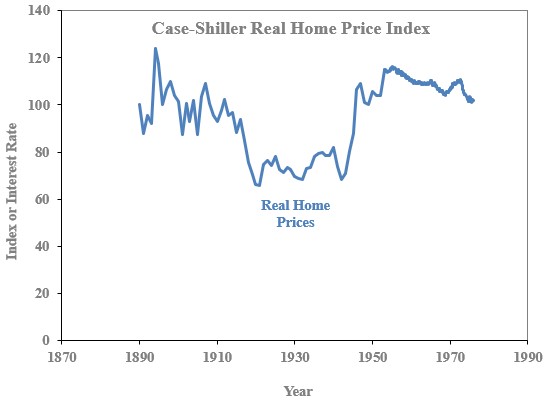 Housing is notoriously difficult to calculate actual returns on and who knows how reliable data from the 19th century is on housing.

Since 1975, housing prices have doubled on a real basis.

Real estate is going bonkers right now but it hasn’t always been like this.

This is fun with numbers, but it’s true.

10. It would have taken just $400 invested in Bitcoin in January of 2013 to hit $1 million today. I typically hate these stats but this one is incredible (and only mildly annoying since probably less than 0.5% of the population even knew how to invest in Bitcoin back then).

11. One million dollars invested in Enron or Lehman Brothers shares would be worth $0 today. Just trying to keep you honest.

12. The worst 10 year total return for the U.S. stock market was a loss of 40%. This was from the peak of the market in September 1929 just before the onset of the Great Depression.

16. The Dow closed at 381 in September 1929. It wouldn’t cross that mark again until November 1954. Most people more or less gave up on the stock market after the 80%+ crash during the Great Depression.

It was impossible to invest in the Dow since index funds didn’t exist or reinvest your dividends back then, but if you could have done these things, you would have earned nearly 6% annual returns in this time.

Dividend yields were much higher then so not all was lost.

Please feel free to send your complaints about any of these stats to my editor (me) after reading.