At last weekend’s Berkshire Hathaway annual meeting Warren Buffett and Charlie Munger opined on everything from bitcoin to stock-picking to the explosion of speculation in the markets over the past year and change.

Munger also claimed, “One consequence of the present situation is that Bernie Sanders has basically won. That’s because with everything so high and interest rates so low, what’s going to happen is the millennial generation is going to have a hell of a time getting rich compared to our generation.”

Basically, Munger is saying the difference between the rich and the poor in the millennial generation is going to be much smaller because it’s going to be harder for young people to generate as much wealth as their parent’s generation.

Munger is probably right in some respects. Just look at how well the financial markets have performed over the past 40+ years from 1980-2020:

Those total returns were good enough for annualized gains of 12%, 8% and 4%, respectively.

It will be impossible for financial markets to equal those returns over the next 40 years. It’s not happening. In 1980, valuations for stocks were dirt cheap because interest rates were double-digits (so was inflation).

Or how about housing prices?

Since 1990, homes in the United States are up more than 205% and that doesn’t include the massive gains we’ve experienced in 2021.

And it’s not just the fact that costs have risen; young people aren’t making as much money as previous generations:

Now, caveats abound on this chart.

If you were born in 1940 or 1950 your parents likely lived through World War I, the Spanish Flu of 1918, the Great Depression and World War II. So it makes sense those generations were better off than previous generations who were busy holding the country together.

But we need to look no further than the amount of wealth by generation to see millennials are far behind baby boomers at the same stage in life: 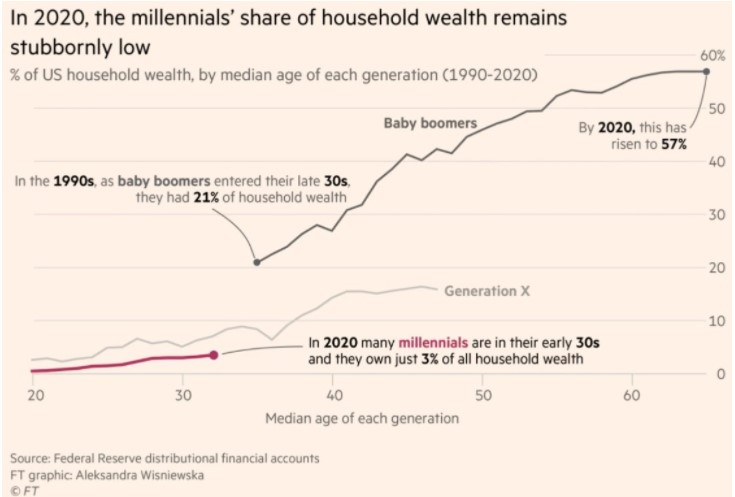 The baby boomers started off with a far bigger piece of the pie than millennials at the same age. There are some reasons for this. Millennials are better educated, so they’re putting off going into the working world longer. And responsibilities like getting married, starting a family and buying a home are happening later in life as well.

Throw in the 2008 financial crisis and now it all makes sense. Building wealth for younger generations as a whole will be much more difficult going forward than it was for our parent’s generation.

On the other hand, you could make the case that building extreme wealth has never been easier for a select part of the population.

Paul Graham recently wrote about how people get rich now versus the past:

In 1982 the most common source of wealth was inheritance. Of the 100 richest people, 60 inherited from an ancestor. There were 10 du Pont heirs alone. By 2020 the number of heirs had been cut in half, accounting for only 27 of the biggest 100 fortunes.

How are people making these new fortunes? Roughly 3/4 by starting companies and 1/4 by investing. Of the 73 new fortunes in 2020, 56 derive from founders’ or early employees’ equity (52 founders, 2 early employees, and 2 wives of founders), and 17 from managing investment funds.

Mark Zuckerberg became the youngest billionaire ever by age 23. Kylie Jenner outdid the Facebook founder and reached tres comma status by age 21. If you found a successful start-up, work in technology or have an enormous influencer brand, it’s never been easier to create wealth at a young age.

So maybe Munger is wrong. Maybe there will just be a smaller number of uber-wealthy people in the millennial generation while everyone else will have more of an uphill climb. Maybe things will be even more concentrated at the top.

This is probably true but I don’t think all hope is lost for younger generations.

You just have to be smarter about planning your finances. You have to use your long time horizon to your advantage. And you have to utilize all of the amazing personal finance and investing tools we have at our fingertips that previous generations could only dream of.

Michael and I spoke about Munger’s comments about getting rich and much more on this week’s Animal Spirits video:

Further Reading:
How Millennials Can Close the Generational Wealth Gap
How Much Should You Have Saved in Your 30s?