There are a number of factors that drive the markets that most investors pay attention to. Things like earnings, economic growth, interest rates, inflation, market trends and valuations.

All these things matter in terms of setting prices. But they are not the be-all, end-all. You can’t simply take fundamental data as gospel for how the markets should perform.

There are many other factors at play. Here are two forces that can have an enormous impact on both prices and fundamentals:

Demographics are not necessarily destiny in all things when it comes to the market. But they are a force to be reckoned with in many markets.

Check out how the distribution by age changes over time starting in 1960: 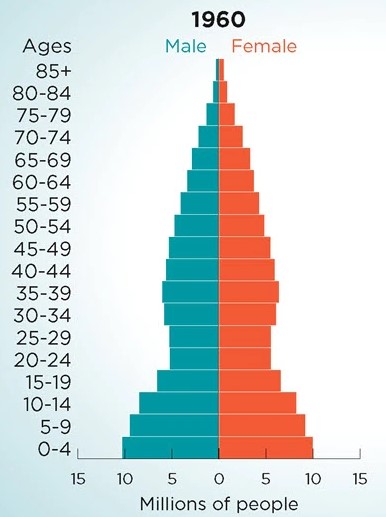 The biggest age cohort was young people. As the Baby Boomer generation aged, look at how this composition changed by 1990 and 2000: 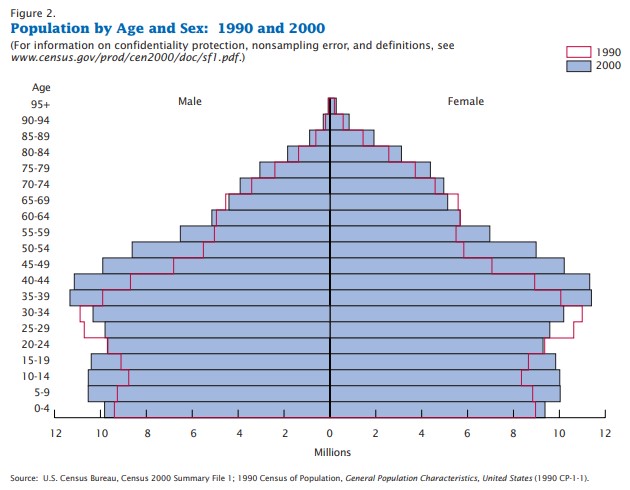 This is probably the simplest explanation for the economic boom we experienced in the 1990s. The boomers began reaching their peak earnings and savings years. 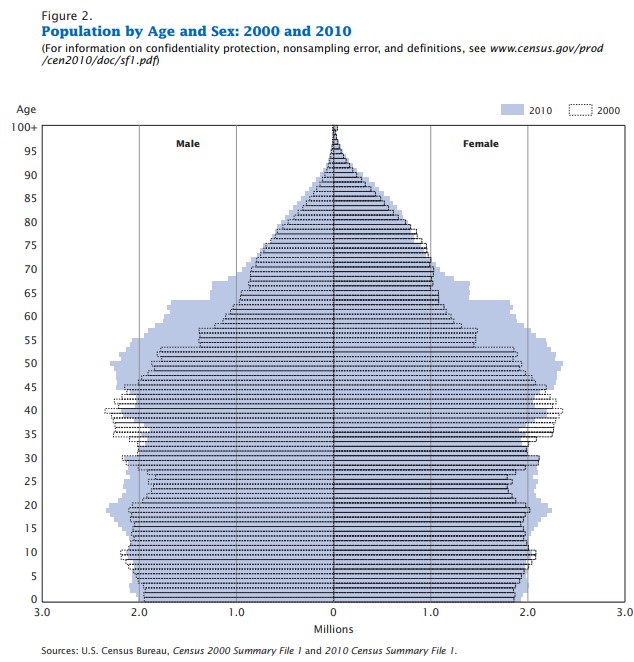 The boomers continued to work their way up like a snake eating a rabbit but look at the improvement in people in their 20s by 2010. This was the millennials bringing up the rear and playing catch-up for the younger generation.

Now look where we stand: 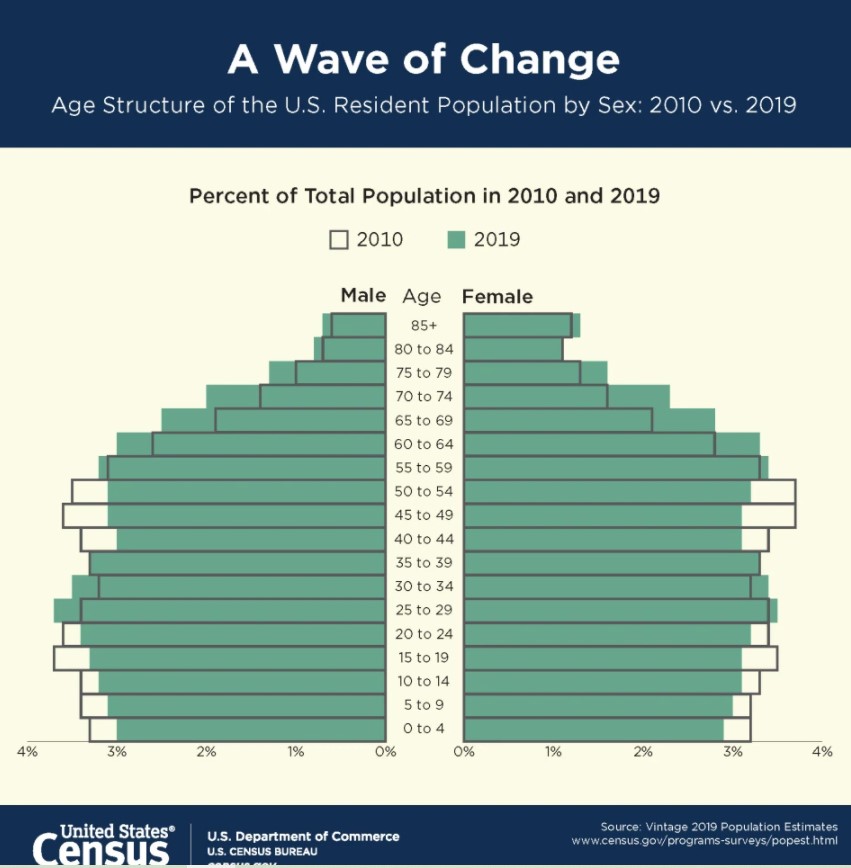 The country is getting older by the year as baby boomers age but there has been steady growth of people in their mid-to-late 30s. This will only continue as you can see from the most common age groups in the years ahead:

What does this mean?

But could demographics overwhelm those fundamentals at times? Definitely.

My entire argument for a strong housing market for most, if not all of this decade rests on the fact that the huge millennial demographic is getting older and two-thirds or so of them will buy a house.

Interest rates and economic cycles and housing prices will have a say in how many of those young people buy a house but the desire for the American dream will likely have a far greater impact over the long-term than short-term fundamentals.

Now, is it possible young people get priced out and decide to rent? Sure, prices could rise past the point of affordability in some areas.

So where do baby boomers fit into this equation?

That brings us to our next important factor — fund flows.

The most striking aspect of the demographics chart from the 1960s is how few old people there were as a percentage of the population. In fact, the coming demographic shift we’ll have with the baby boomers is something we have never seen before: 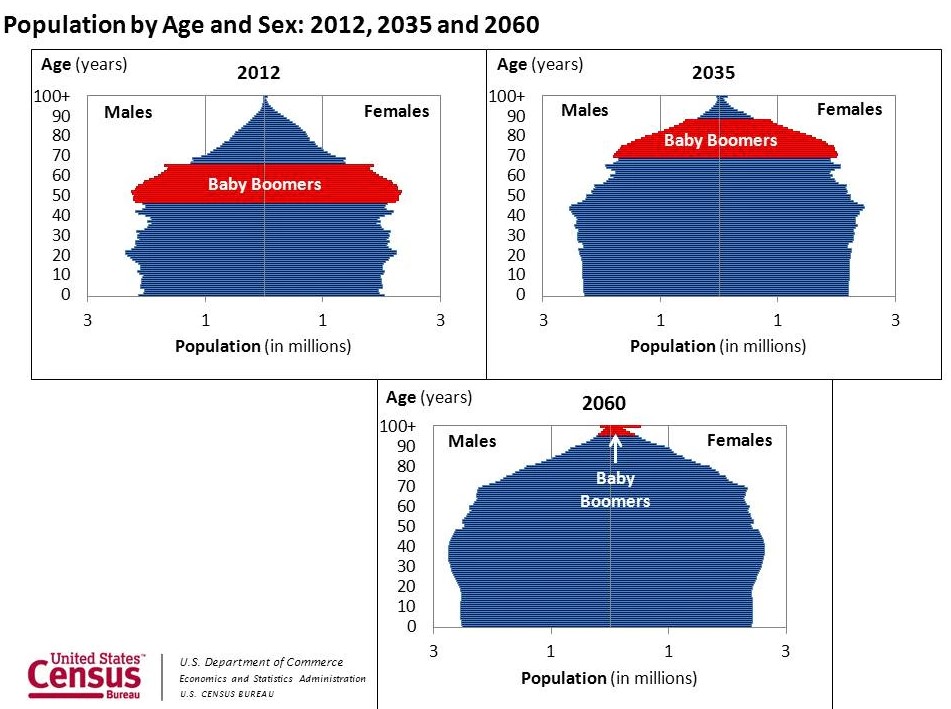 There has never been a demographic this big live for this long. Although millennials are likely the driving force for housing and stock purchases in the years ahead, baby boomers still control the bulk of the assets and will remain a force to be reckoned with. 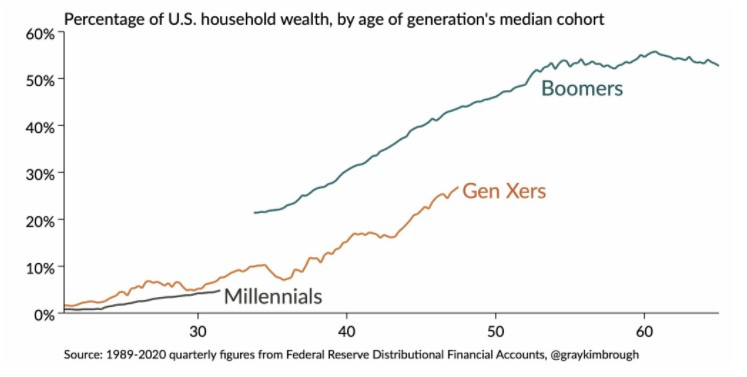 If millennials are the buyers doesn’t that mean boomers are the sellers? And doesn’t this present a headwind for the stock market?

On the one hand, since 10% of the population holds 84% of the stocks, most older people aren’t going to become forced sellers of their stocks. Much of that wealth will likely be passed down to the next generation.

On the other hand, many baby boomers have likely already been selling their stocks for the past decade as they slowly de-risk and diversify their portfolios. Fidelity’s Jurrien Timmer posted the following chart recently: 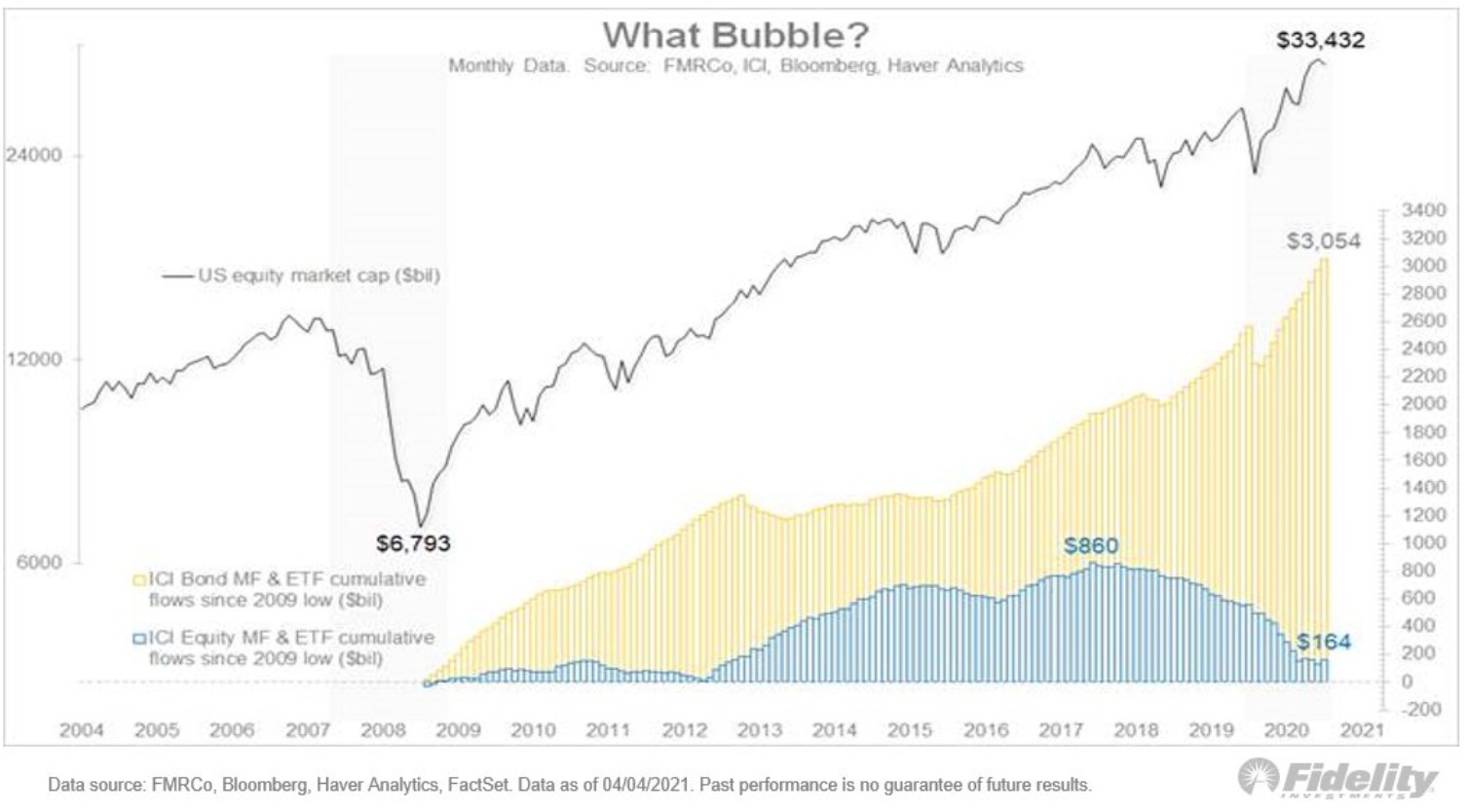 It shows the cumulative amount of flows into stock mutual funds and ETFs since 2009 has been roughly $164 billion despite the fact that the S&P 500 is up nearly 700% in that time. Bonds mutual funds and ETFs, on the other hand, have seen inflows of more than $3 trillion. The Barclays Aggregate Bond Index is up around 60% in total over this time. 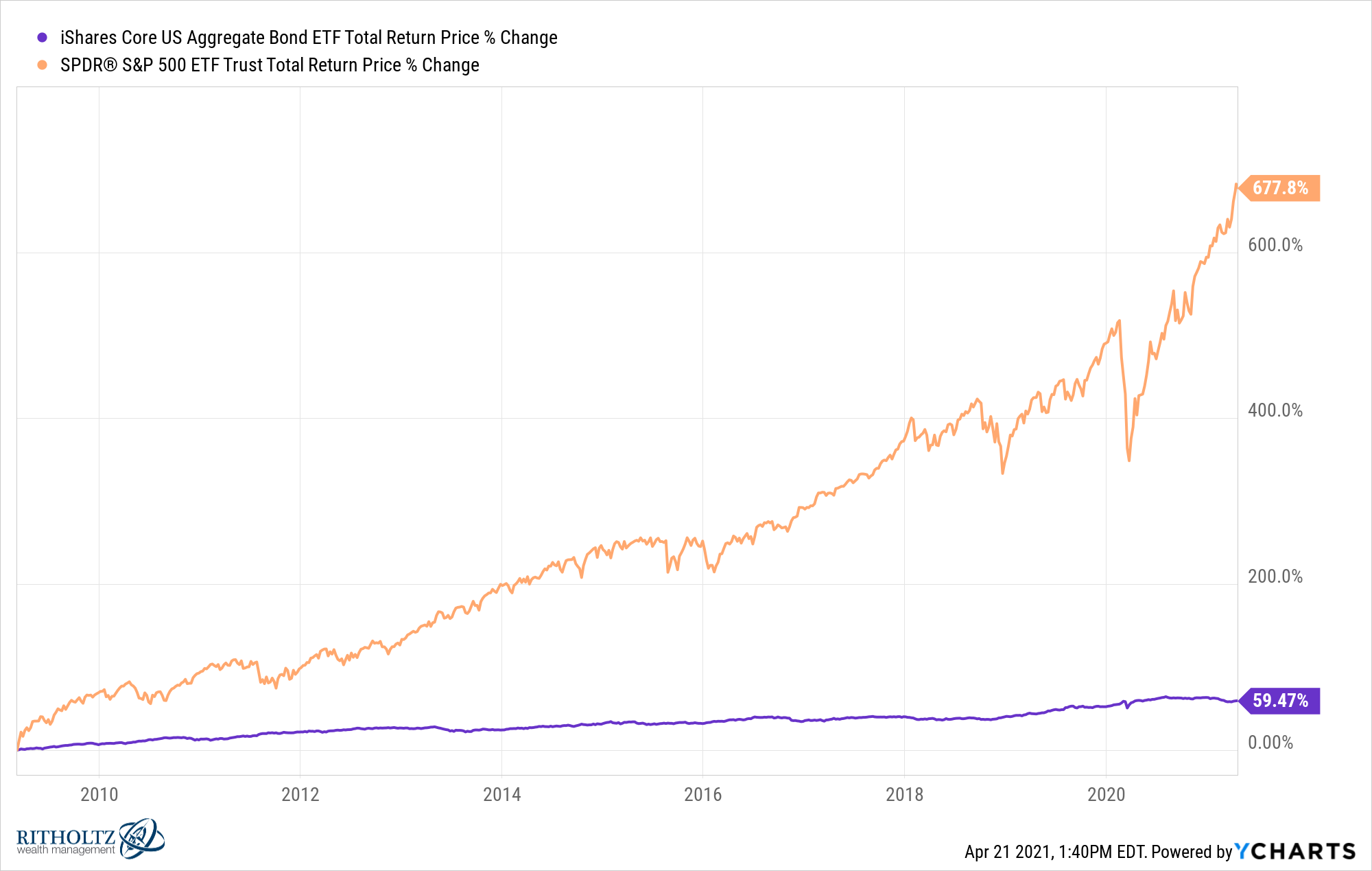 How is this possible? Shouldn’t tons of money be flowing into stocks during a bull market?

Fund flows require some nuance so there’s not a single answer here. But the fact that boomers are retiring en masse has to be part of it.

And think about how much more institutionalized the entire investment industry is now. Individual retirement accounts and 401ks are still relatively new in the grand scheme of things. In fact, baby boomers were basically the test case for these retirement vehicles starting in the early-1980s.

According to data from Axios and the Investment Company Institute, there is now more than $11 trillion in IRAs and more than $9 trillion in 401ks and other defined contribution plans: 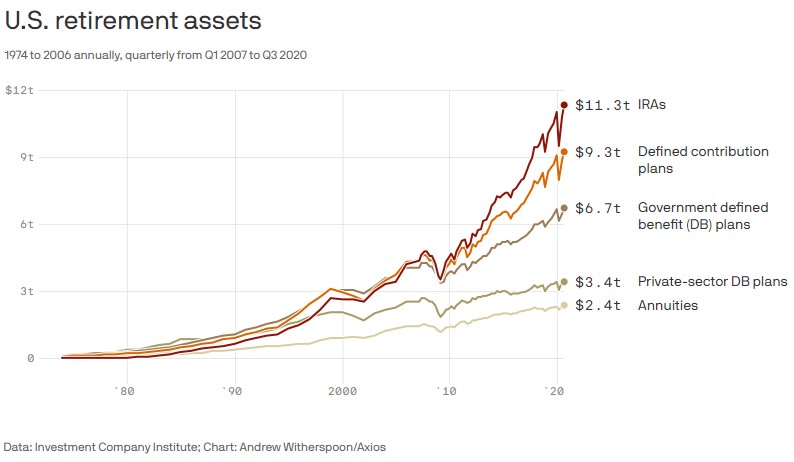 To understand the importance of fund flows on the stock and bond markets, consider the fact that targetdate retirement funds collectively manage roughly $3 trillion. These are funds that rebalance periodically back to predetermined asset allocation weights. And as you get closer to your retirement, they automatically shift assets from stocks to bonds.

These funds didn’t exist in the past. People were more or less flying blind when it came to retirement planning with their money.

This same thing is happening to baby boomer portfolios that are self-managed or managed by financial advisors as well.

It’s possible this will put a cap on bond yields going forward since so much money will be buying fixed income funds regardless of economic fundamentals or yield levels. Investors need a safe asset to stabilize their portfolio and see them through the inevitable volatility in the stock market.

The Federal Reserve, economic growth, inflation and valuations will obviously continue to play a role in what happens with stock and bond markets.

But demographics and fund flows should not be ignored when trying to decipher what is driving the markets.