I first read The Millionaire Next Door a few years out of college. For some reason the following stats were the ones that jumped out at me the most:

Of course, saving money on a car won’t make you a millionaire by itself. But it’s that mindset of cutting back on certain areas that can help make regular people wealthy over the long haul.

Wealth is the fancy car you don’t drive.

In the follow-up to the original, The Next Millionaire Next Door looked at the make and model of the automobiles driven by millionaires both in the original 1996 study and the updated version in 2016: 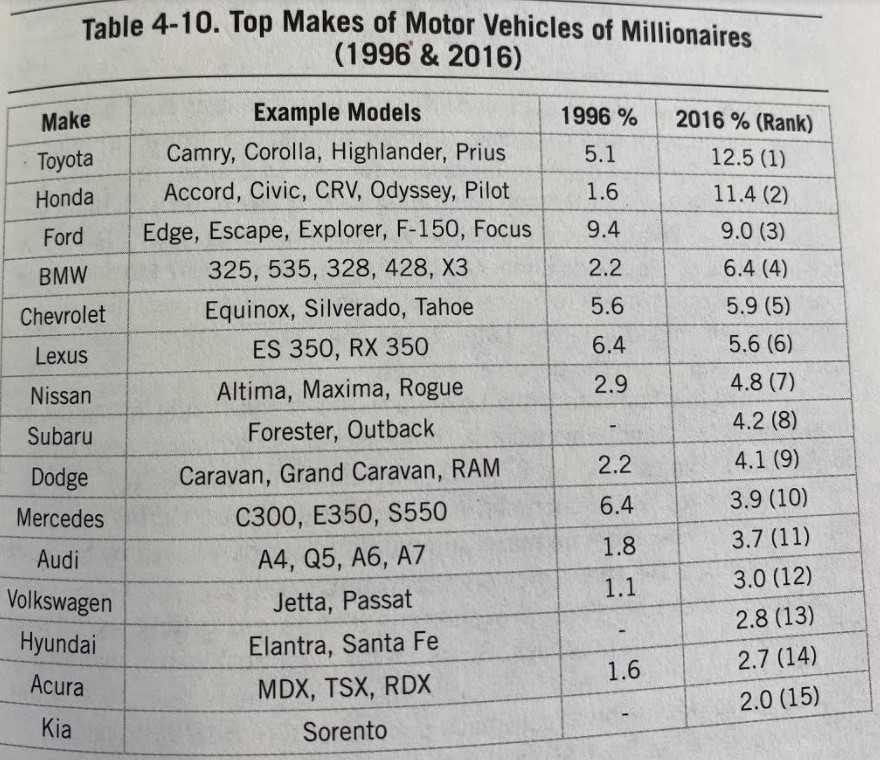 Many people would probably be surprised to know the millionaire next door is more likely to drive a Honda or Ford than a BMW or Mercedes Benz.

Maybe this is just confirmation bias on my part since I’m not a car person but this makes sense when you realize how expensive owning a car can be for certain people.

Upwork’s Adam Ozimek had a viral tweet last fall that turned some heads:

This seems a tad excessive but Ozimek is right that the cost of a new car is higher than you think.

Go Banking Rates recently released a study that looked at the salary level required to purchase a new automobile. The number is higher than you’d expect. They estimate you need to make nearly $82k per year in the United States to be able to afford a new car.

They base this number on not only the average price of a new set of wheels — which is just over $37k — but all of the ancillary costs involved as well.

For example, here is the breakdown for someone who lives in my home state of Michigan: 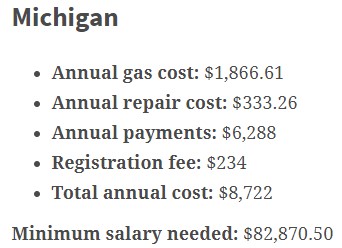 You can see the costs involved include far more than just the monthly payments. Based on these calculations, the actual cost of owning a new car tack on nearly 40% more to the annual payments.1

Alaska was the cheapest state but you still had to make more than $75k for it to make sense: 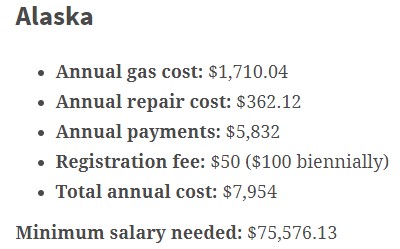 And unsurprisingly, California was the most expensive: 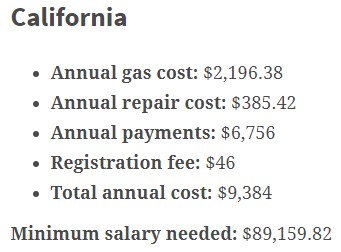 I’m sure you could quibble with some of the details in these estimates but the point remains that buying a new car is more expensive than the sticker price.

The total costs are around 10% of the income thresholds in these examples. Once you factor in taxes, that means transportation could be upwards of 15% of your budget if you make this much. And it’s obviously much higher as a percentage of the total if you make less.

My goal here is not to spend shame people out of driving a car they like. Some people love cars way more than I do. Maybe you make enough money where it doesn’t make as big of a dent in your budget. Or maybe you cut back in other places so you can afford a nice ride.

Succeeding in personal finance is all about trade-offs.

But the cost of transportation is the second biggest fixed cost in most people’s budget behind housing. And when you add the ancillary costs on top of it, owning a new car can blow a huge hole in your finances if you’re not careful.

You can have your finances in order and drive a nice car. It’s not mutually exclusive.

But if you drive a nice new car and your finances are a mess, there’s a pretty simple remedy.

Even going from a new $37k car to a used $20k would save you more than $3k a year in payments. That’s halfway to maxing out your IRA.

Further Reading:
Is the Ford F-150 Partially Responsible for the Retirement Crisis?

1I did a back of the envelope on the payments and it looks like they’re assuming a 6 year loan at a 3% interest rate or thereabouts.