In 2014 I wrote a piece called What If You Only Invested at Market Peaks?

So I decided to simply run the numbers as a thought exercise on the results of an investor who only invested their money at market peaks, just before a market crash.

I was more curious than anything and unsure about what the results would show. They were surprisingly better than expected.

I didn’t put much thought into this piece but it has become by far the most widely read piece of content I’ve ever written. It’s been read nearly a million times.

It still gets tens of thousands of page views a year.

I used this example in my book A Wealth of Common Sense but have always thought this story would be even better with visuals.

So with the help of our producer, Duncan Hill, I found an illustrator1 who could turn my story about the world’s worst market timer into a cartoon.

I updated some of the numbers, did some voiceover work, got the illustration just how we wanted it and had Duncan put it all together.

Most people who read my original piece understand it’s simply a story used to get across the importance of having a long-term mindset about investing.

But there has been plenty of pushback as well.

What if stock returns aren’t as good going forward?

What if the world comes to an end?

There are always risks involved with any investment strategy but I believe thinking and acting for the long-term gives you the biggest margin of safety of any approach.

For example, had you invested at the tail end of 1999 when the CAPE ratio hit an all-time record of roughly 45x, that was likely the worst entry point in U.S. stock market history.

You would have been forced to sit through the ensuing crash from the dot-com bubble, the 2008 crash and this year’s Corona crash. That’s two times seeing the stock market get cut in half along with a 4-week period where it fell by a third. All in a little over two decades.

And what would you have to show for it? 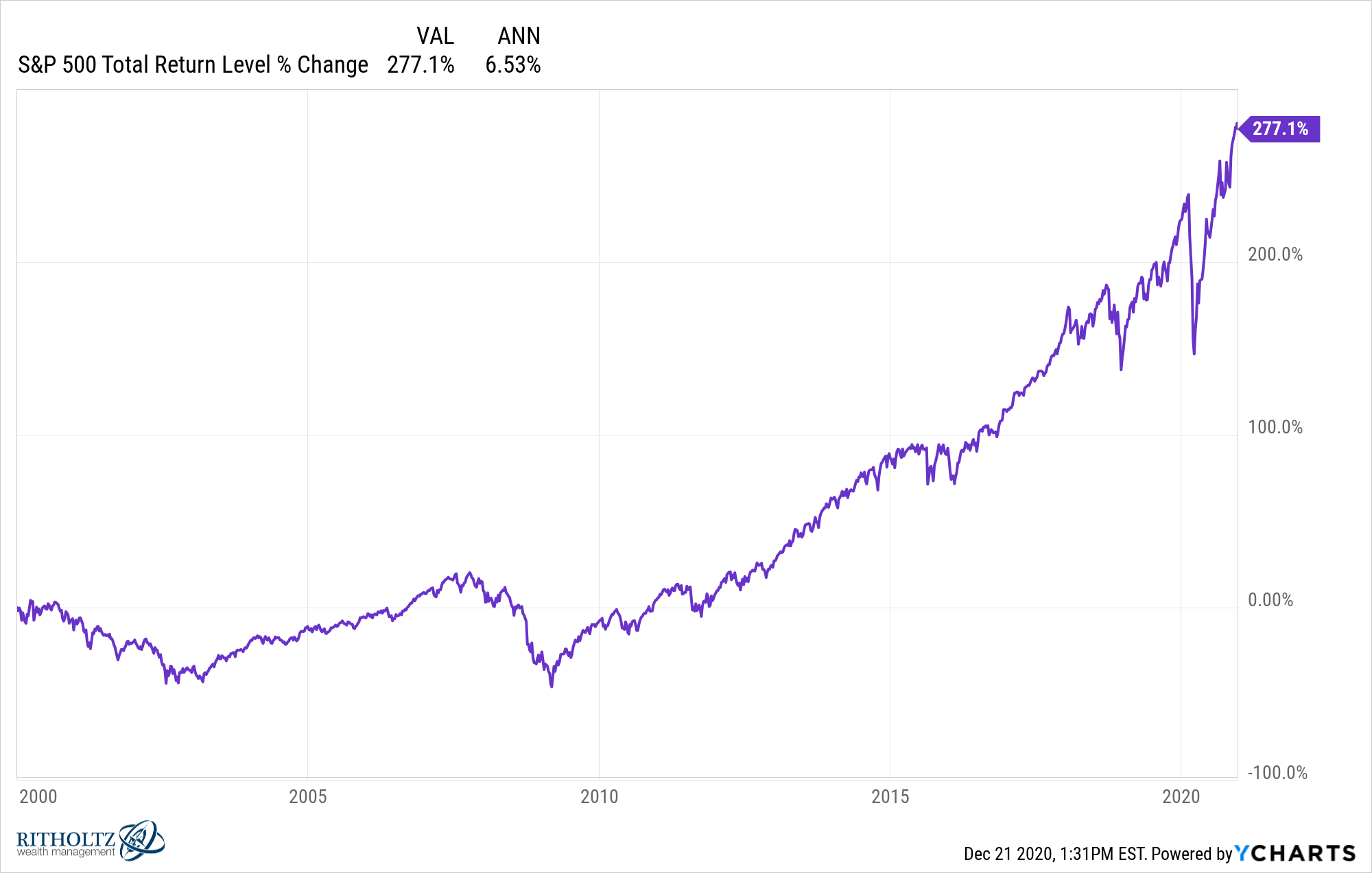 Not great returns but certainly not terrible over 20+ years.

Sticking with this theme, I looked back at the long-term returns when investing at the peak of the market just before a nasty crash or bear market:

There were some lean times in there, especially in the aftermath of the Great Depression. But by and large, the long-term returns even from the height of market peaks look pretty decent.

I’m not suggesting investors are owed anything over the long-run. The stock market is and always has been a risky proposition, especially in the short-to-intermediate-term.

But if you have a long enough time horizon and are willing to be patient, the long-run remains a good place to be when investing in the stock market.

Further Reading:
What If You Only Invested at Market Peaks?

1It’s the same illustrator I used for my new book.