Pensions feel like a relic from another time. A time when people worked for the same company for decades and the gold at the end of the rainbow was a guaranteed stream of income to see you through retirement.

Now we have the gig economy, 401(k) plans, robo-advisors, Robinhood, target date funds and an average tenure of just 4.1 years with the same employer for salaried employees.

A new study by New York University shows how pension ownership of the stock market has dwindled over the years: 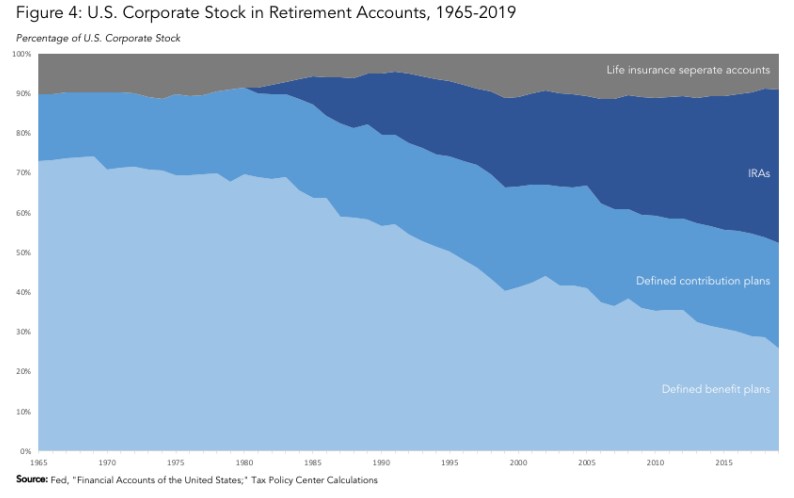 This chart breaks things out by the various retirement accounts but defined benefit pensions once accounted for 22% of the U.S. stock market in 1985, a number that declined to just 8% by 2019.1

Charley Ellis performed a study that looks at the trend in pension coverage for employees from 1983 through 2013: 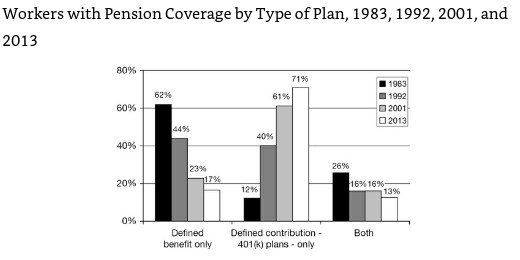 People with a pension as a workplace retirement option dropped from nearly two-thirds to 17%. Now the majority of employees are on their own when it comes to funding their retirement, either in a 401(k) plan, an IRA or a taxable account.

The only problem here is there are still a number of people who are depending on pension income to see them through retirement. This is especially true of many retirees in the middle class. Edward Wolff broke down the composition of household wealth by different wealth classes:

You can see pensions are still a relatively large asset for those outside of the top 1%. The middle and lower classes have very little in the way of financial assets meaning they have a large reliance on their primary residence and a pension. This doesn’t mean everyone has one but pensions remain a large weighting for a number of households in terms of their financial assets.

This could become a problem if their state or municipality runs into financial difficulties.

The Pew Research Center looked at state pension funding levels as of 2017: 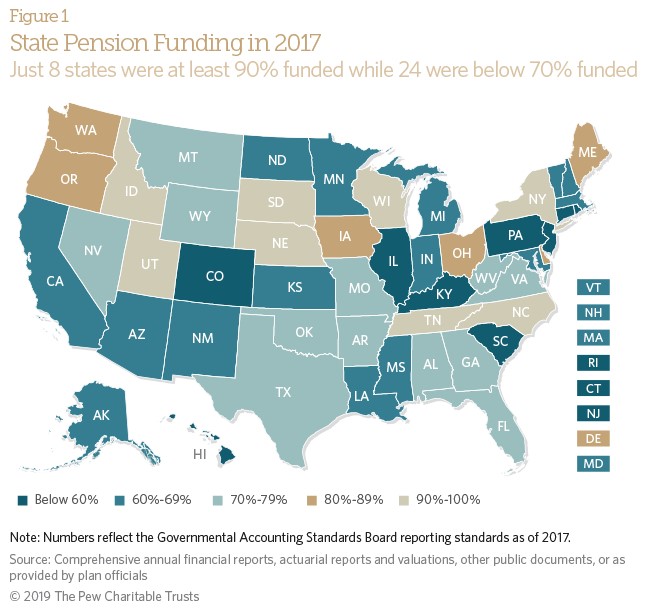 If I was a young teacher in a state like Illinois or Pennsylvania I would be worried about two things related to my pension:

(1) Am I going to have to make much larger contributions in the years ahead?

(2) Am I going to get far less than I’m planning on right now?

Allan Sloane at the Washington Post found some updated numbers to show where these pensions now stand:

Keith Brainard, director of research for the National Association of State Retirement Administrators, estimates that the 5,332 retirement funds sponsored by state and local governments were $1.96 trillion underwater as of June 30, according to the most recent available data, up from $1.90 trillion as of year-end 2019. This has happened, he said, even though the funds’ assets reached an all-time high of about $4.65 trillion.

What’s more, if you use dispassionate math rather than the generous accounting principles that public pension funds are allowed to use, you see that lower long-term interest rates are doing much more damage than the numbers from Brainard’s organization suggest. For instance, Steve Church of Piscataqua Research estimates that the combined shortfall of the 127 public pension funds that he follows, which have a total of about $4 trillion of assets, has reached about $7.44 trillion. That’s more than quadruple the funds’ reported $1.53 trillion shortfall.

So even though pension assets are now at an all-time high from a lengthy bull market, many plans are still dealing with a massive shortfall to meet their beneficiary payouts.

This is not an investing issue. Sure, there are pension plans that have made poor decisions on their money managers and asset classes but this is more of a planning issue than anything.

Expectations were too high or the amount of money set aside was too low. Unless these pension plans can go back in time and put $10k per beneficiary into Amazon’s IPO in 1997, it doesn’t even really matter how they invest from here on out. They will likely not have enough money.

If you get your expectations too far out of whack or don’t save enough money, your investing prowess won’t really matter. The same thing is true for retirees who didn’t save enough or have a lifestyle that outstrips their savings.

All options for the most underfunded pensions will lead to someone being angry:

4. Ask for a federal bailout?

The last option would likely be the easiest option but many states are going to need money for other services coming out of the pandemic. Unless we see MMT on steroids, there are going be difficult decisions in the years ahead.

Further Reading:
How Are Institutional Investors Going to Hit Their Return Targets?
How to Wreck a Pension Plan in 3 Easy Steps

1Pensions moving into alternative asset classes has made an impact on this ownership number as well.