The IRS estimates they brought in roughly $3.6 trillion in taxes for fiscal year 2020.

The bulk of that money comes from income and payroll taxes. Here is the breakdown from the Budget of the U.S. Government: 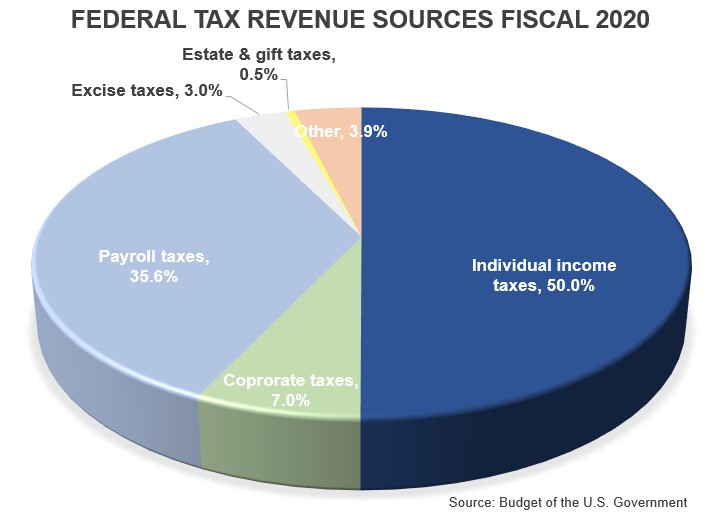 These are obviously big numbers but the Covid crisis is putting them into perspective in terms of what our government can do when it comes to spending. The U.S. treasury said they expect to borrow up to $4.5 trillion this year.

Part of this is deficit spending but the majority is for fiscal support and emergency spending measures to help with the pandemic. Last year the government borrowed roughly $1.3 trillion so 2020 will see an additional $3.2 trillion or so in borrowing to help with the crisis.

That $3.2 trillion is pretty close to the annual tax receipts brought in this year, which has some people thinking the following:

If all this government spending doesn’t bring about a massive rise in prices in the form of inflation, why can’t the government just wipe out taxes every year by printing money?

This isn’t as wild of a question as some people may think.

Our currency is not tied to a hard asset such as gold like it once was. We can print as much money as we want with the push of a button. The only constraint we have in terms of the amount of money we create is inflation (and political will I guess).

And if inflation remains subdued, what’s stopping the government from spending more and more money?

Most people would assume the reason we can’t do this is that there has to be some sort of upper limit on the amount of money the government can spend or borrow over time.

But Stephanie Kelton offers four other reasons we need to keep paying taxes in her new book The Deficit Myth:

1. Taxes enable governments to provision themselves without the use of explicit force. If there were no taxes it would be difficult for the government to have power over their citizens.

If people didn’t need to earn dollars to pay taxes, it would be much harder for the government to find workers to carry out essential jobs.

Having a currency everyone uses to pay their taxes makes it easier to find people who will produce goods and services that can be exchanged for that currency.

2. Inflation. If there were no constraints on government spending there would eventually be a nasty inflation problem. Taxes act as a restrictor of sorts in that they can help keep inflation from getting out of control.

3. Taxes can be used to distribute wealth and income. This lever hasn’t been used as much as some people would like in recent decades but it’s there if necessary.

That could be a tax on cigarettes or investment gains or even carbon taxes.

This crisis is going to challenge plenty of previously held views on the limits of government spending.

Many people mistakenly assume the U.S. government’s budget should work just like it does for a household. After all, households eventually have to pay off their debts and have to spend within the constraints of their incomes.

This assumption is a mistake for the simple fact that the U.S. government has the ability to issue the very same currency it can spend. Without that ability, the economy would be in much bigger trouble at the moment.

If we make it to the other side of this crisis without enormous unintended economic consequences either the citizens or politicians or both are going to ask for more of this any time we hit a rough patch.

You don’t have to agree with everything Kelton lays out in The Deficit Myth but it will make you think long and hard about your previously held views on the deficit, government debt and spending.

The release of this book was timed perfectly with the current situation and now that the genie is out of the bottle in terms of massive government spending during an economic downturn there’s no going back now.

I still can’t tell if Kelton’s book will turn out to be prescient with where we’re headed with government spending in the future or a case of economics gone wild.

That will depend on the future path of inflation and our government’s willingness to spend money in the coming years.

Either way, it’s worth a read.

Further Reading:
Do We Need to Worry About Government Debt?