Not all bear markets are created equal but investors typically expect them to follow some fairly simple guidelines.

The general rule of thumb is the smallest, junkiest, low-quality companies get crushed on the way down but then lead during the recovery because investors tend to avoid risk during a downturn and seek it out during an upturn.

This is how fear and greed work.

This bear market has followed this script in some ways and completely ignored it in other ways.

For instance, mega cap tech stocks were crushing it before the pandemic then held up better than other areas of the market during the bear market and just to rub it in, continue to beat the S&P 500, small caps, mid caps, foreign stocks and emerging markets from the bottom: 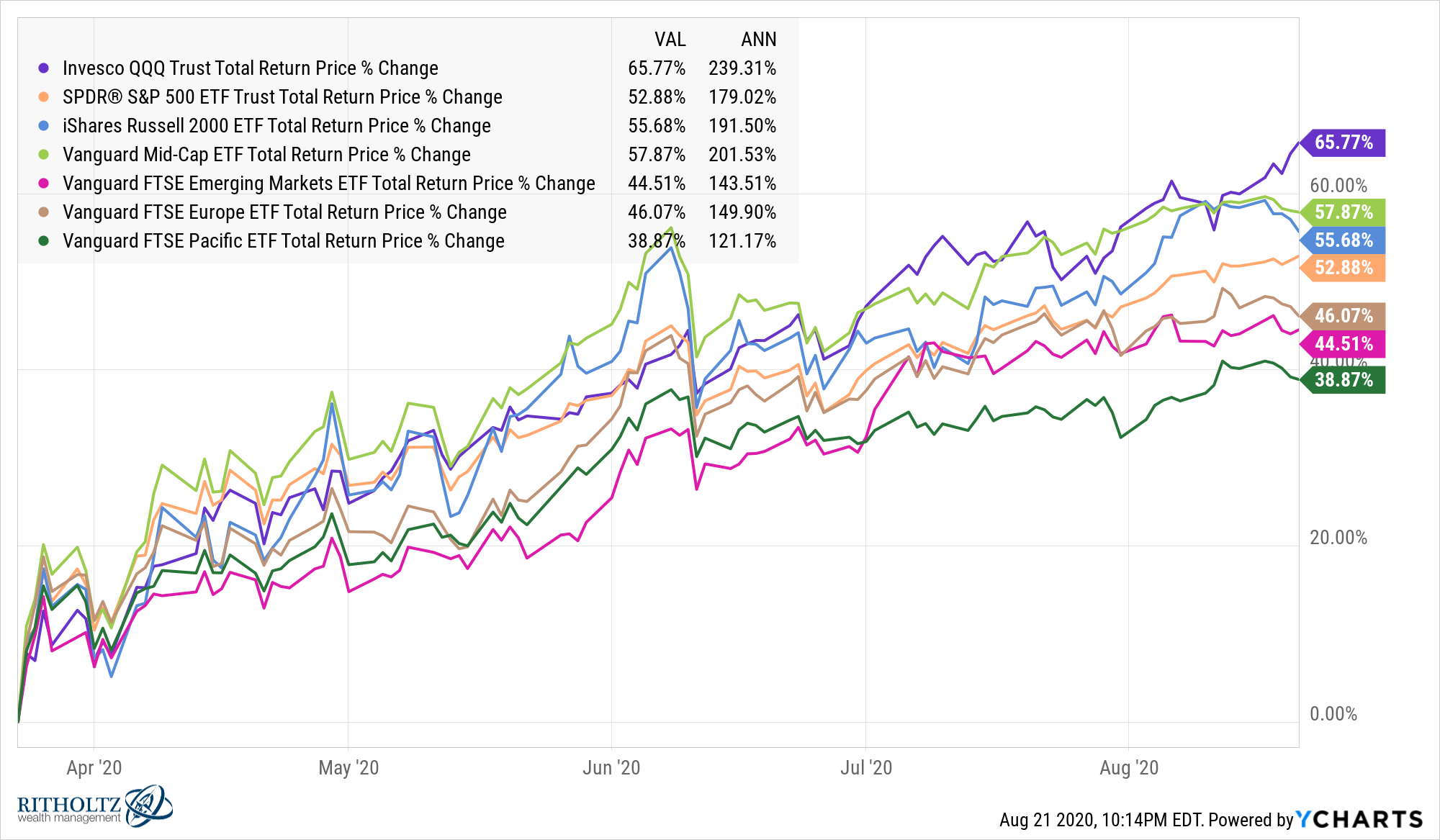 I have no way of proving this because I haven’t checked the actual data, but I’m 99.9% sure one group of stocks has never outperformed during a bull market, the subsequent bear market and the recovery from that bear.

I guess 2020 just wanted to throw another unprecedented outcome into the pile with all the other ones for the year.

The year-to-date numbers show how untouchable tech stocks have been in 2020: 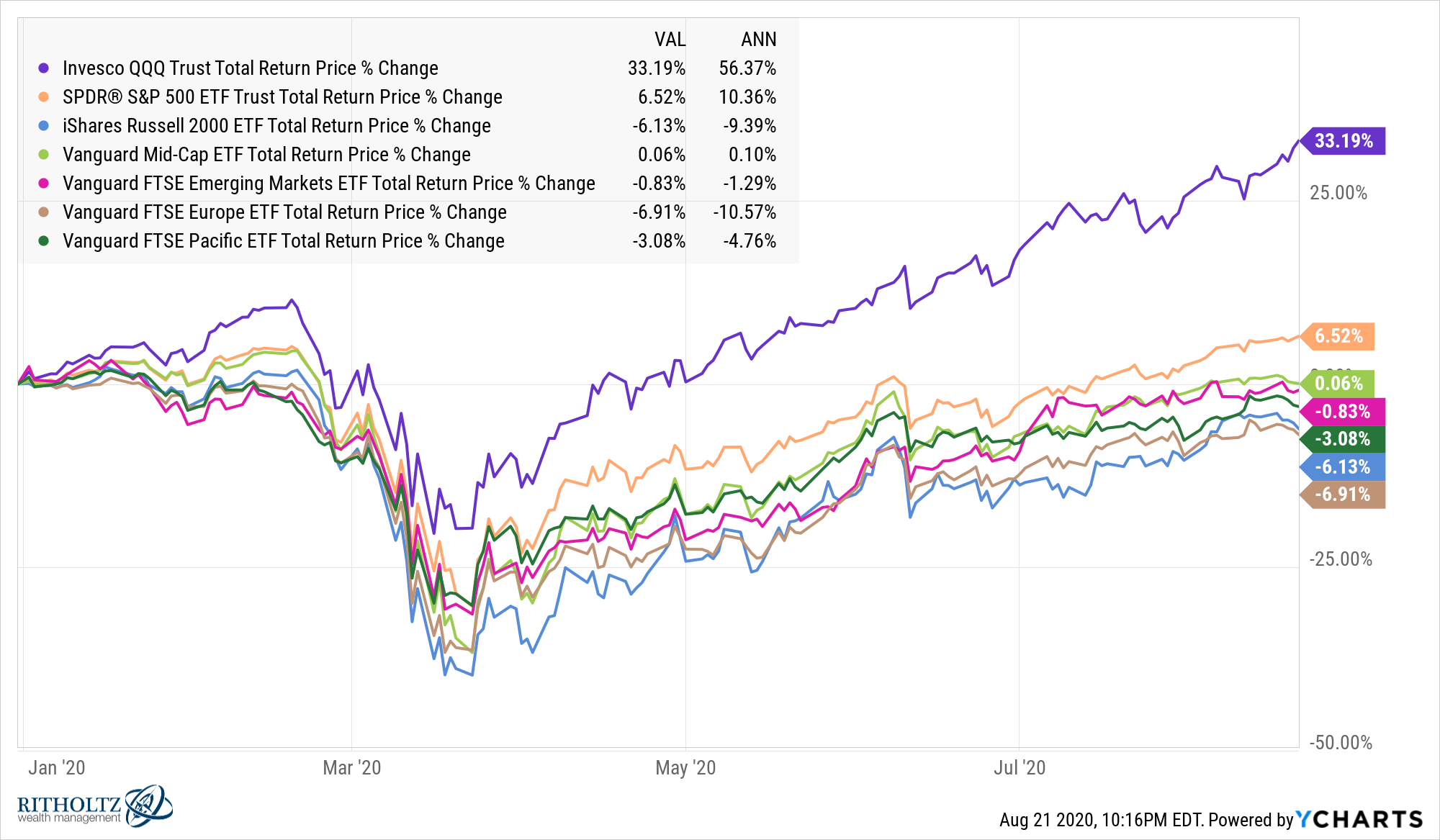 I have good news and bad news.

Let’s do the bad news first.

The bad news is, there are a whole host of asset classes and regions of the world that have lagged the biggest tech stocks in the United States for what feels like an eternity. And it sure doesn’t feel like there’s catalyst to stop these monopolies.

The good news is, for those investors who are willing to plug their nose, there are places to put your money that haven’t been crushing the market for years on end. This could be helpful assuming tech stocks don’t swallow the entire stock market in the coming years.

There are a handful of riskier segments of the market doing their best to keep up with the Nasdaq 100 from the bottom: 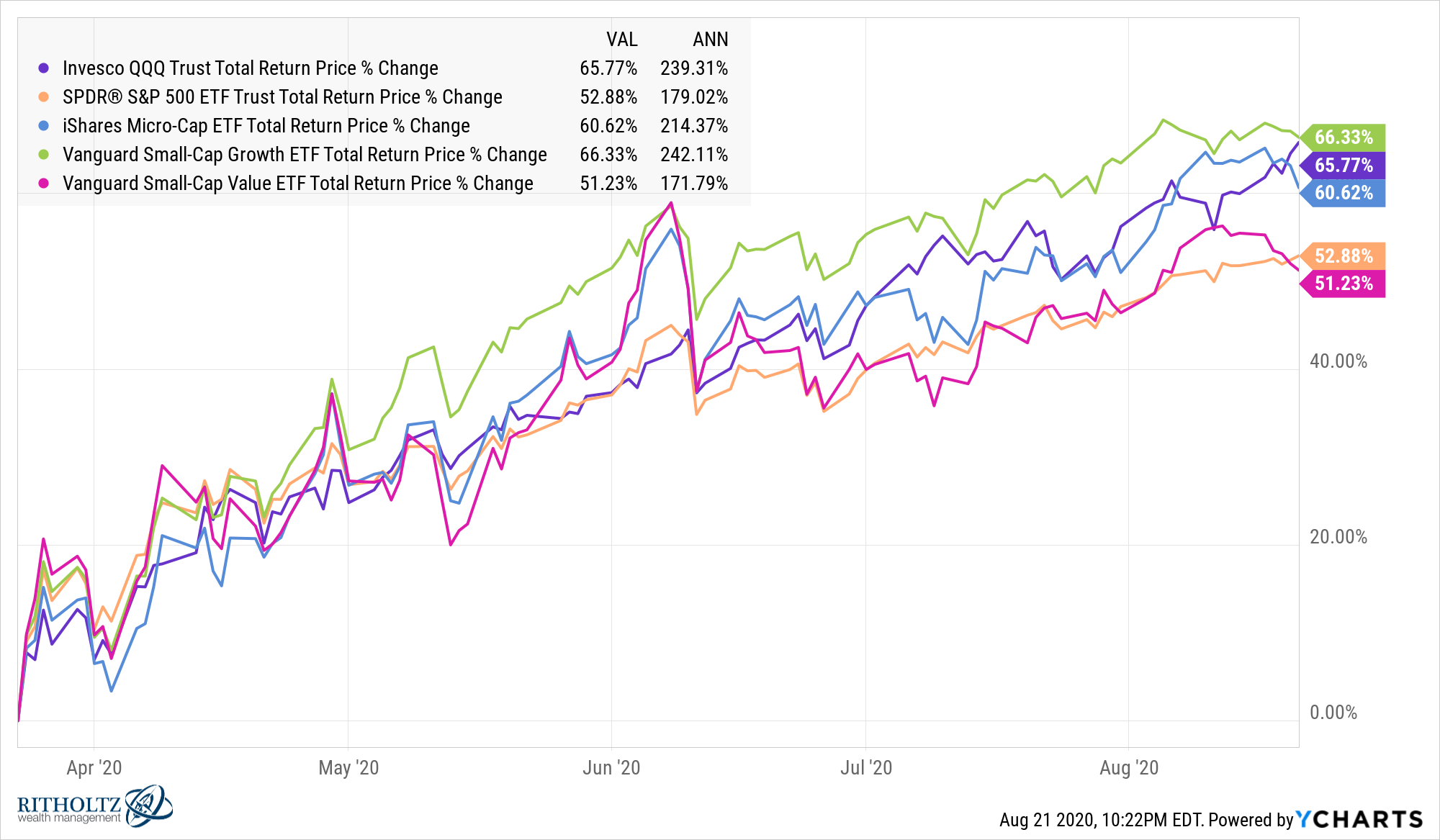 Micro caps and small cap growth stocks are neck and neck with the triple Qs from the bottom. Small cap value has kept pace with the broader S&P 500 but has yet to reassert its dominance from the previous 90 years or so.

The past decade or so has been none too kind to academic studies of stock market factors. I don’t think I’ve ever seen a research paper that recommends small cap growth stocks yet they have crushed small cap value and continue to do so: 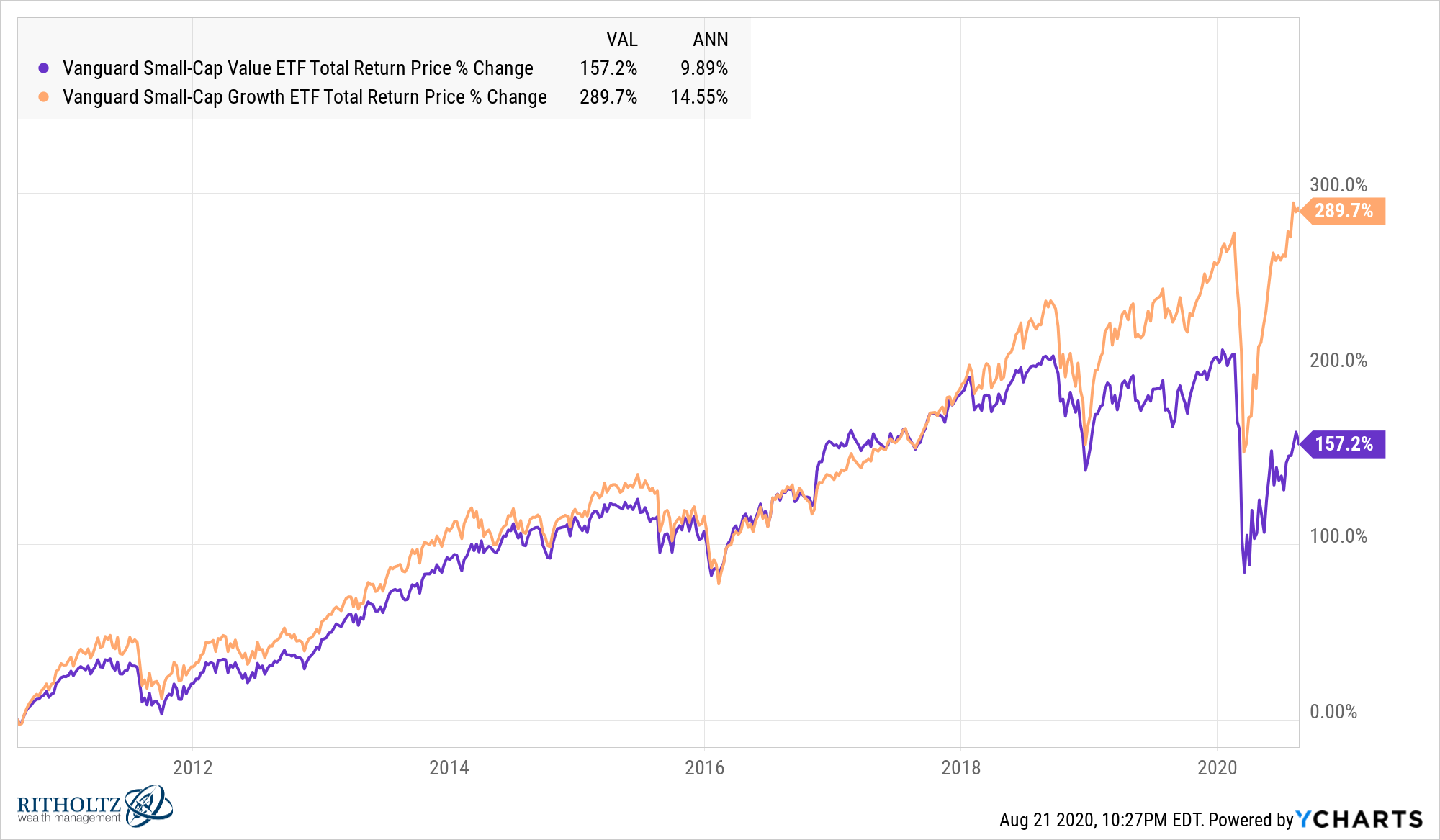 You could look at this one of two ways as a proponent of small cap value — (1) it’s time to re-think historical relationships or (2) it’s now even more of a buying opportunity than ever.1

Investing is exceedingly difficult because the answer to this question is unknowable in advance.

S&P 500 sector returns from the bottom are also both instructive and useless when seen through the lens of historical bear markets: 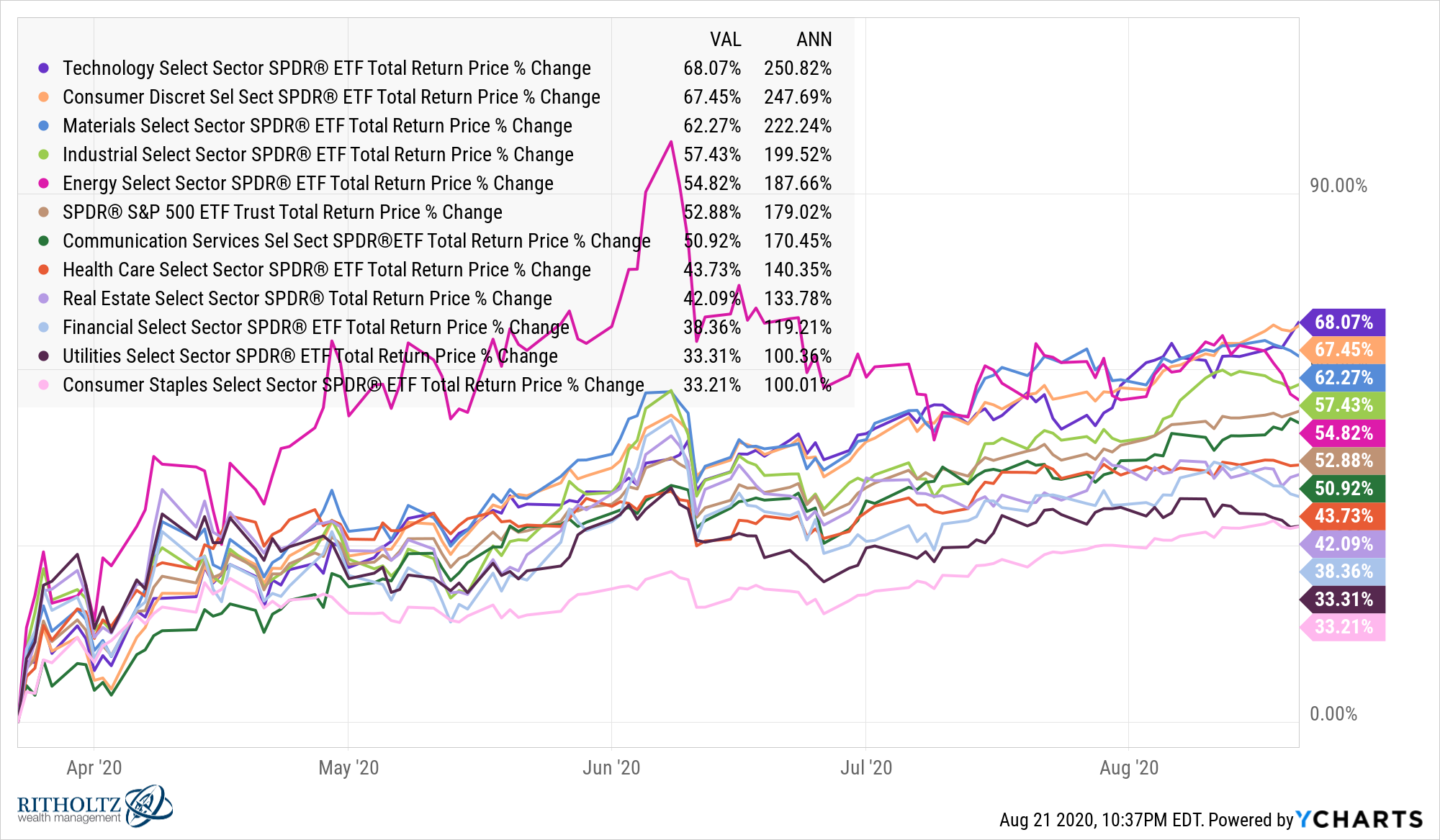 On the things that make sense scale — utilities and consumer staples are lagging the other sectors, which makes sense since they are more defensive types of stocks. Also, cyclical sectors such as materials and consumer discretionary stocks are doing very well from the bottom.

Energy stocks were up nearly 99% through June but have since fallen by more than 20%.

On the things that do and don’t make sense scale — surprise, surprise technology is the best performing sector. This makes no sense since they have outperformed since Kim Kardashian married Kris Humphries for 72 days. But it does make a lot of sense when you consider how important technology has been to the functioning of so many aspects of our daily lives during the pandemic.

Maybe something, maybe nothing, but many of the countries that are handling the pandemic better than the United States have outperformed the S&P 500 from the bottom: 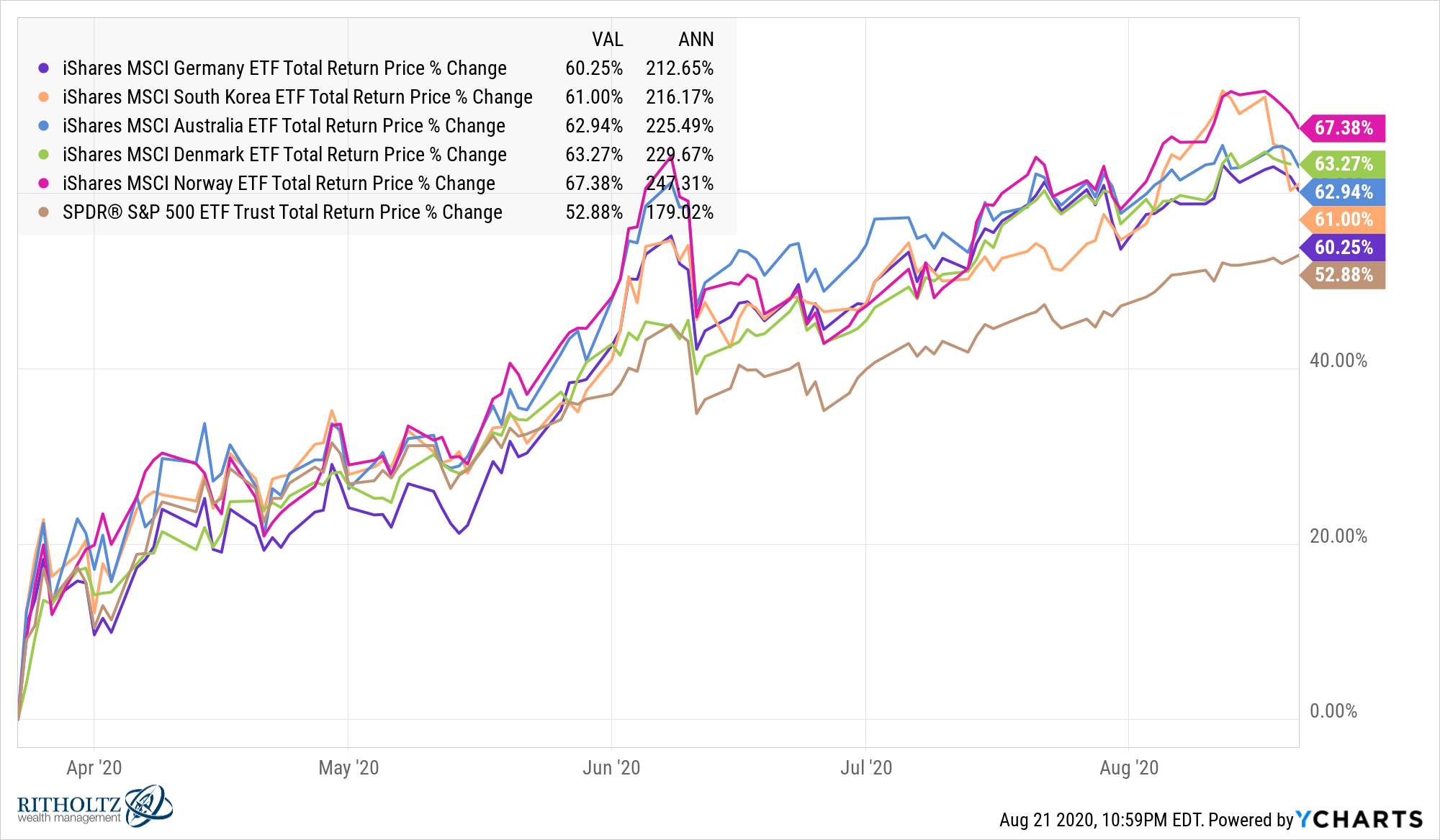 This could also have to do with these countries playing catch-up and the dollar falling for the past few months but it will be interesting to see if markets begin pricing in quicker economic recoveries for the nations that have fared relatively better when it comes to putting a lid on the virus.

Just to round things out here is the performance of a handful of other asset classes from the bottom: 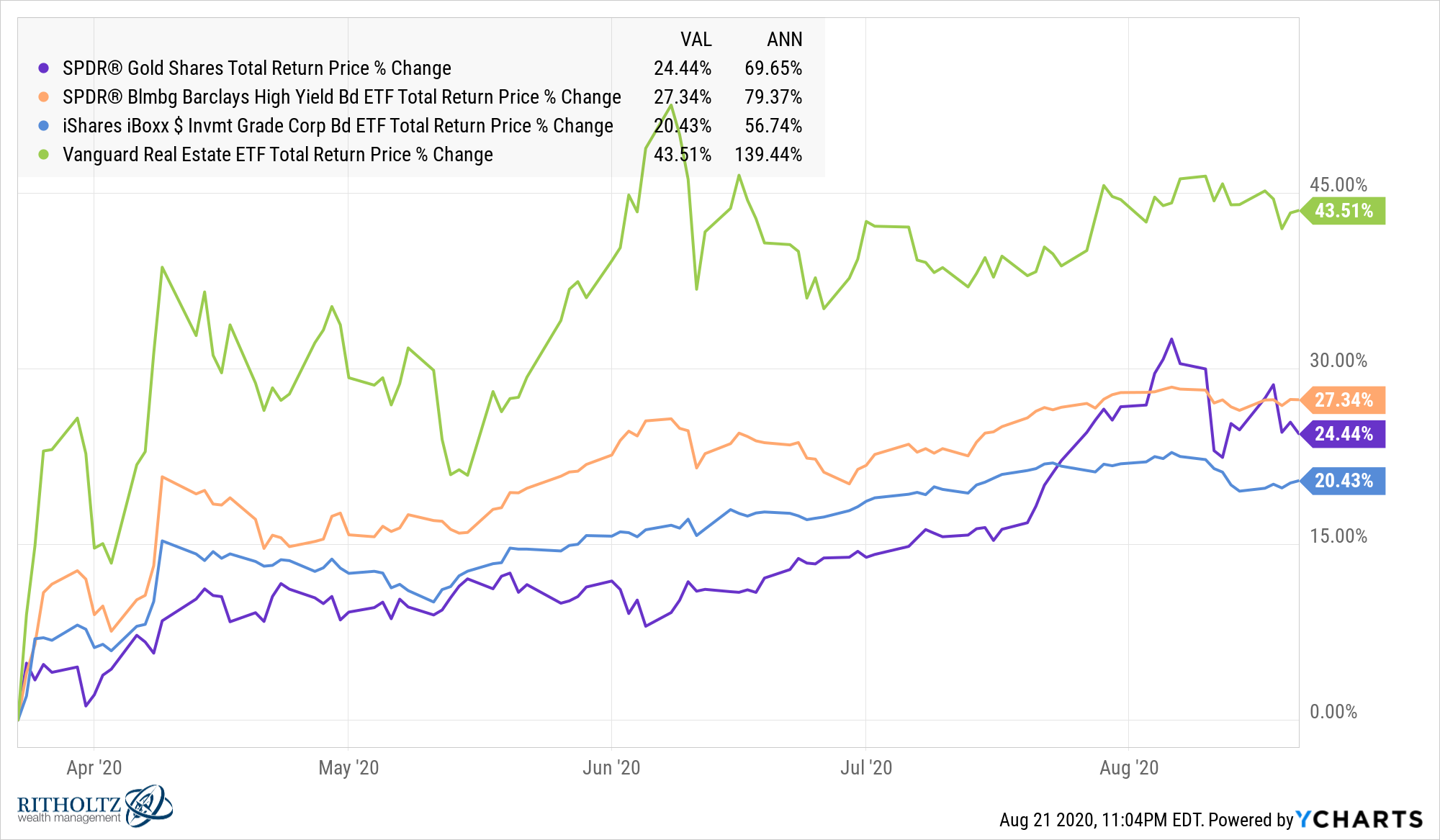 Basically, every risk asset in the world is up over the past 5 months or so since stock markets bottomed in late-March.

1It is worth noting most of the outperformance has come in the past few years.