A lot has been written in finance circles in recent years about the shrinking number of publicly-traded U.S. corporations. In this piece I wrote for Bloomberg I discuss what it means for investors in a more globalized world and why it is likely not that big of a deal for diversified investors. I also think that a lot of the companies that went public in the 1990s were smaller companies that never should have IPO’d in the first place but I digress…

They say the winners get to write the history books. If we’re talking about the global stock market returns over the past 100-plus years then the U.S. gets exclusive rights to this story. Research from Dimson, Marsh and Staunton in their Global Investment Returns Yearbook 2017 show just how dominant the U.S. has been relative to other countries since the turn of the 20th century: 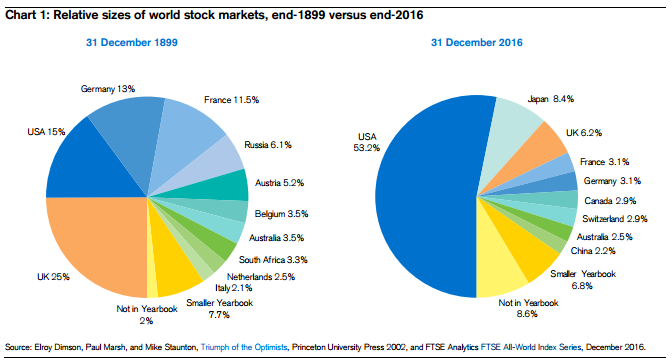 The U.S. has gone from making up 15 percent of the global stock market to more than 50 percent. However, as the U.S. stock market has grown relative to the rest of the world, it is actually getting smaller in other ways.

According to CRSP data, there were more than 9,100 U.S.-listed public companies in 1997. Today, that number is down to slightly more than 5,700. The Wilshire 5000, an index used as a proxy for all U.S. securities with readily available pricing data, holds just over 3,600 stocks as of the start of this year, down from more than 7,500 in 1998. So the number of stocks that trade on the exchanges has basically been cut in half over the past 20 years or so. There are a number of reasons for this change — increased regulations to go public, fewer IPOs, lax anti-trust laws, venture-backed companies staying private longer and a winner-takes-all marketplace in many industries.

Investors are worried that the shrinkage in the number of U.S. companies means that wealth and the markets themselves are becoming more concentrated in fewer and fewer hands. Fewer investment options could make it harder for investors to find adequate investment opportunities. For those investors who share these worries my advice would be to look abroad for more investment opportunities. While U.S.-listed companies have seen their ranks diminish since the 1990s, there are now more public companies than ever worldwide.

To get a sense of how small some stock markets around the globe really are, take a look at the following table which takes the market cap of a country’s stock market and matches it with a publicly traded company of similar size*: 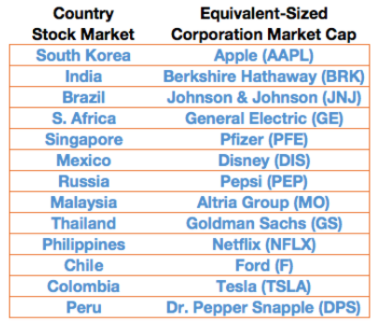 As a company, Apple is larger than any of these individual stock markets. The Mexican stock market is roughly the same size as Disney’s market cap. Goldman Sachs is larger than Thailand’s stock market.People tend to forget that the U.S. was once an emerging market that has become much more mature over time. One of the reasons these countries offer such a huge opportunity set is because many of these countries and companies have much more room to run since they’re so much smaller. Not only do foreign markets offer investors more securities to choose from but they’re also far cheaper than U.S. stocks at the moment.

Of course, there are legitimate reasons why the U.S. won the 20th century in terms of stock market performance. There are many structural advantages we have in place including a more dynamic economy, more wealth, better investor protections, more trust in our financial system, less corruption, the reserve currency, military strength, etc. But it would be silly to assume that the U.S. can expect to see the same type of relative growth to occur over the next century at its current size.

*After writing this piece for Bloomberg a few people wrote in to tell me some of the emerging market numbers (such as India) had to be off. The numbers I used were from a DFA research paper and DFA told me these market cap numbers were based on their investable universe of stocks in this countries based on things like market liquidity and availability of shares to trade in the public markets.