I’m worried just like everyone else about the new case outbreaks in the South and West: 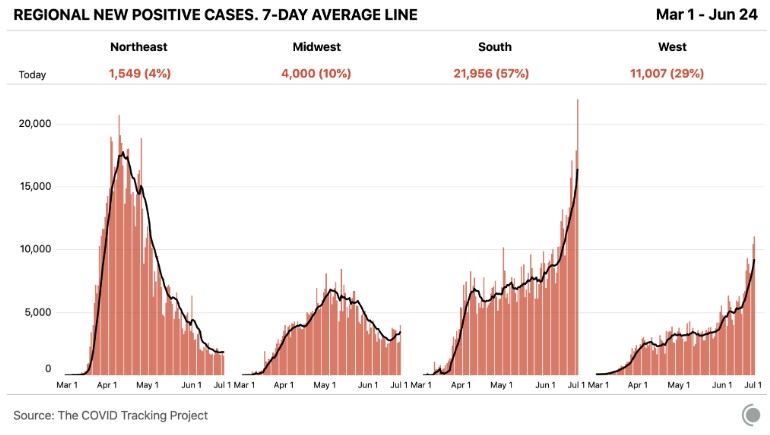 It seems like it’s only a matter of time until we see an uptick in the Northeast and Midwest as well.

I’m worried we don’t really have a plan for the pandemic 4-5 months in. March and April were tough to stomach but I assumed taking those difficult steps would be worth it if we got our act together by having a more comprehensive plan on the other side of the quarantine. For whatever reason, those plans never materialized and it seems like now we just hope and pray for a vaccine or more effective treatment.

This puts us in a precarious position where any uptick in the economy basically goes hand in hand with an outbreak in the virus. And a reduction in the virus likely means a step back for the economy until we have a better plan in place.

I’m worried about those people who own, operate or work in the restaurant industry. I just don’t see how some of these places survive this crisis.

Less than three weeks after restaurants in Michigan were allowed to open, a number of them were forced to shut down after multiple employees contracted the virus. In Grand Rapids alone, there have been a half dozen restaurants that had to close up for cleaning purposes after employees became ill. A single bar in East Lansing, MI was linked to nearly 100 new cases.

Unless we start getting full compliance on mask-wearing at these establishments it seems like many of these places will see months of stops and starts for their businesses. I don’t see how many of the small businesses survive something like this.

I’m worried that the Fed is worried about the banking sector. Last week the Fed announced they will be banning buybacks and capping dividends for 30 of the largest U.S. banks after putting these financial institutions through a stress test.

This doesn’t necessarily mean another financial collapse like we had in 2008 is coming but it does mean the Fed can see the writing on the wall that things are likely to get worse for certain segments of the market. And much of that financial pain will eventually roll up to the banks who support many of these businesses.

I’m guessing the Fed will do everything in their power to support the banks but eventually pain in the business world will translate into pain for the banks.

I’m worried about a policy misstep as some of the supportive measures for the economy are set to run out in the coming months. Something like 30 million people in the United States are now collecting unemployment benefits.

The $600 boost in unemployment insurance is set to run out at the end of July. Household incomes can’t handle that money going away right now (chart via EPI): 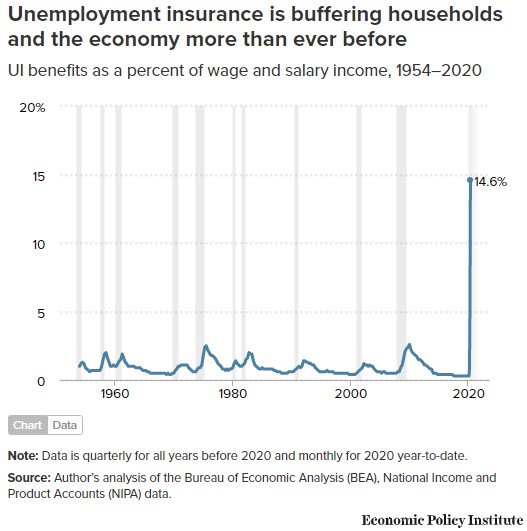 Households who have lost their jobs and wages are living in the most uncertain of times. I hope our politicians do the right thing and help those who are in need because this is a crisis no one chose to take part in.

I’m worried about how disruptive it will be for both children and parents if kids aren’t able to go back to school full-time in the fall.

I understand why this will be a difficult decision for superintendents, governors and local leaders. At a time when states are facing massive shortfalls of cash and school budgets are being cut in many districts, it’s going to be difficult to keep up with suggested protocols for safety and cleanliness.

On the other hand, keeping kids home will be disruptive for those people who need to go to work. The quarantine forced everyone to work from home or stay home with their kids. If online learning is the solution for this fall it’s going to put a lot of families in a difficult position.

And missing out on being with friends and peers, even if it’s just part-time, would be brutal for our kids. They need that social interaction.

I’m missing plenty of other things to worry about right now so this is an incomplete list.

2020 has given us all plenty to worry about.

It’s possible the market experiences another leg down from this continued crisis. The economy could slow again as well. Neither of these things would surprise me. This year is basically a grand experiment in fiscal and monetary policy so no one really knows the second-order effects on the economy or markets.

It’s also possible all of the supportive measures to the economy and markets from politicians and the Fed will continue unabated until this thing is over.

Maybe we’ll get a vaccine or better treatments in the coming months.

Maybe the unemployment benefits will be extended. Maybe people will get another check in the mail. Maybe the government will step in and help more small businesses.

No one ever knows what’s going to happen in the future but this year it seems like the various paths we could take are even more uncertain than ever.

2020 has been one of the most volatile years on record but not just for the stock market. Businesses have been disrupted like never before. Our emotions are all over the place from all of the worries that have been introduced. Life itself is unstable.

Unfortunately, everyone has to be willing to accept volatility in almost all areas of their life right now.

That means we all have to live with more worries until we get past the pandemic.

Further Reading:
When Should You Sell Your Stocks?