The sharpest economic contraction in history was also likely the shortest recession/depression in history as the economy bottomed out some time in April after peaking in late-February.

Things are still quite fragile at the moment so there’s no guarantee we’re out of the woods just yet. Millions of people continue to file for unemployment every week. A number of industries and businesses are still in a world of pain.

Wild swings are occurring in both directions from the pandemic so we can’t rule anything out in this type of environment.

Isn’t it possible we could see a swift double-dip recession if something else goes wrong?

It’s impossible to map out the path of the pandemic from here because so much of what happens is driven by our actions in suppressing the virus but my biggest worry for another economic leg down would be a policy misstep.

The fiscal and monetary stimulus has kept the economy afloat for the past few months. If that support is pulled back prematurely we could certainly witness another severe slowdown.

This is a unique crisis but I wanted to see how common has been to experience a double-dip recession historically to see if there is any precedent. Following the 2008 crisis, there were plenty of double-dip predictions that never came to pass and we eventually saw the longest expansion in history.

But there have been more rapid-fire recessions in the past. This is every recession since 1850 (which is as far back as NBER data goes): 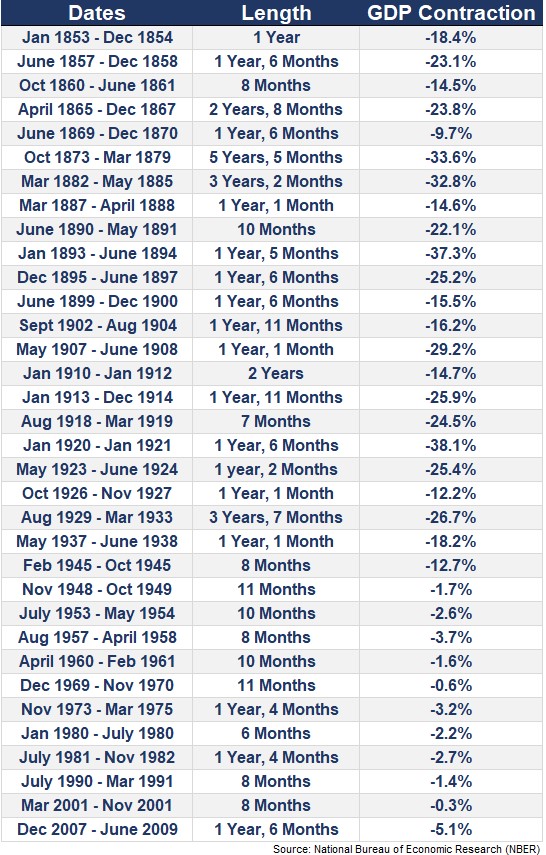 Prior to the current pullback, the shortest economic contraction on record was in the first half of 1980 that lasted just 6 months.

Then just a year later the country slipped back into a recession. This succession of recessions was not caused by a policy error but rather a policy prescription. To get a handle on rising prices, Paul Volcker raised rates so high that he sent the economy into a downturn (with the blessing of President Reagan).

Here is a summary of the average length of recession along with the average time of the ensuing expansion:

The reason I’m showing the overall record since 1850 as well as the pre- and post-WWII data is because the more mature economy has been a different experience than what took place when the United States was still an emerging economic power.

Recessions have shortened while the expansions have gotten longer.

In addition to a more mature and diversified economy, you can thank the Federal Reserve for this period of relative economic calm as compared to the past.

Having said that, the current economic backdrop is probably closer to the shocks our ancestors experienced when the booms and busts happened more frequently.

I’m making this number up, but let’s assume 18 months between economic contractions is a short enough time frame to call it a double-dip recession. Using that definition as our guidepost, that would mean there have been 5 double-dip recessions out of 34 in total (not including the current one).

Coincidentally, the shortest period of time between recessions occurred in the aftermath of the 1918 Spanish Flu pandemic. There was a short recession caused in part by the end of the war and in part by the pandemic from the summer of 1918 through the spring of 1919.

This was followed up 10 months later with the depression of 1920-1921 which lasted a year and a half (which in turn was followed by the Roaring 20s).

There was also a recession at the outset of World War I which took place just a year after a panic that lasted two years. The other instances of back-to-back recessions took place in the 1800s.

It’s bizarre to think we could see a situation where you have two recessions in the same year or even two that occur with a span of fewer than two years.

The biggest risk that could cause something like this to happen is probably not from the pandemic itself but from a policy mistake by the government.

Further Reading:
How Did We Ever Get to the Roaring 20s