When COVID-19 began spreading to other countries at the end of February, the only place with more infections than China was South Korea.

Daily cases immediately shot up but Korean officials quickly got their act together and stopped the virus in its tracks: 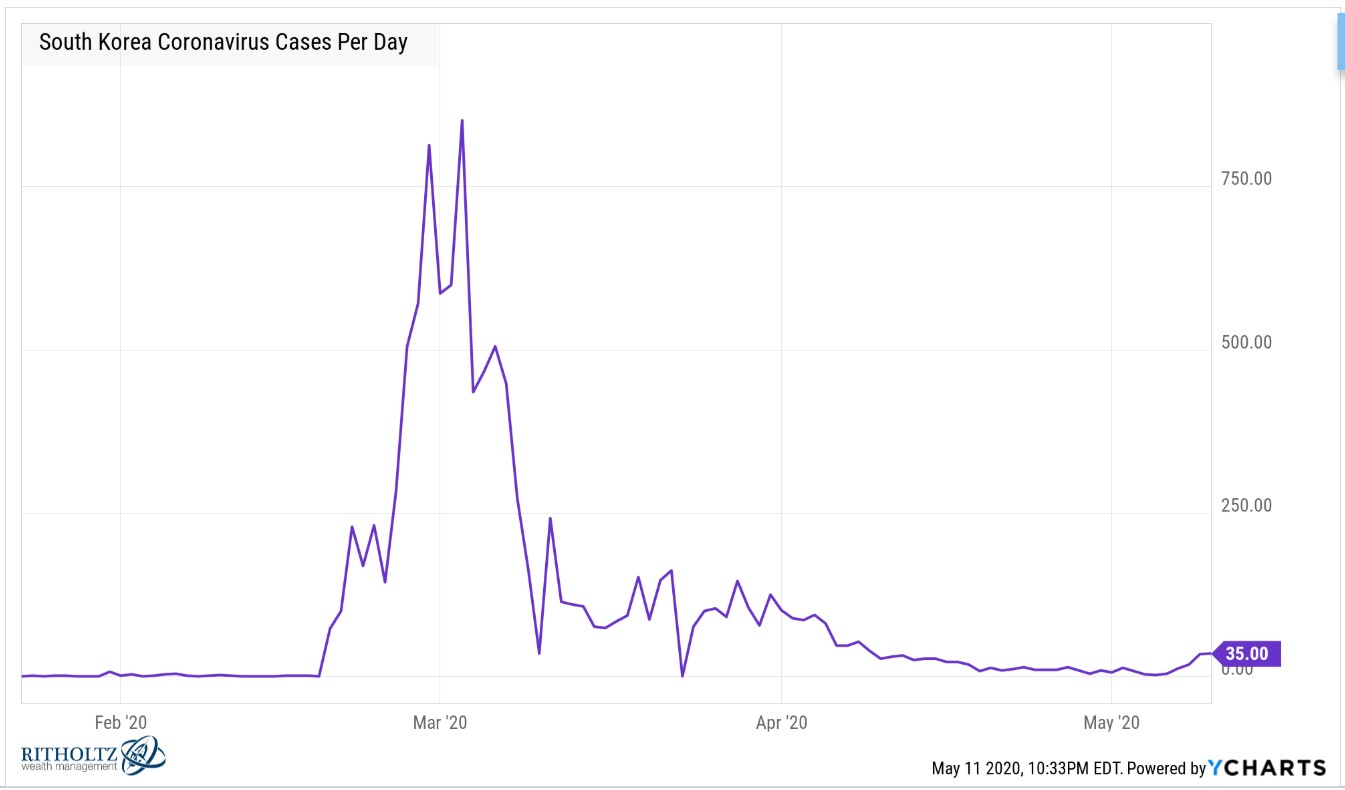 Despite a slight uptick in recent days, you could count the number of new daily cases on one hand in recent weeks.

South Korea has used a system of testing, tracking, technology and isolation of sick patients. Their response is one of the most impressive in the entire world.

Contrast South Korea’s handling of the virus with the United States and the results aren’t even close. The U.S. has roughly 6-7x more people than South Korea but we’ve experienced more than 120x as many confirmed cases and almost 300x as many deaths. 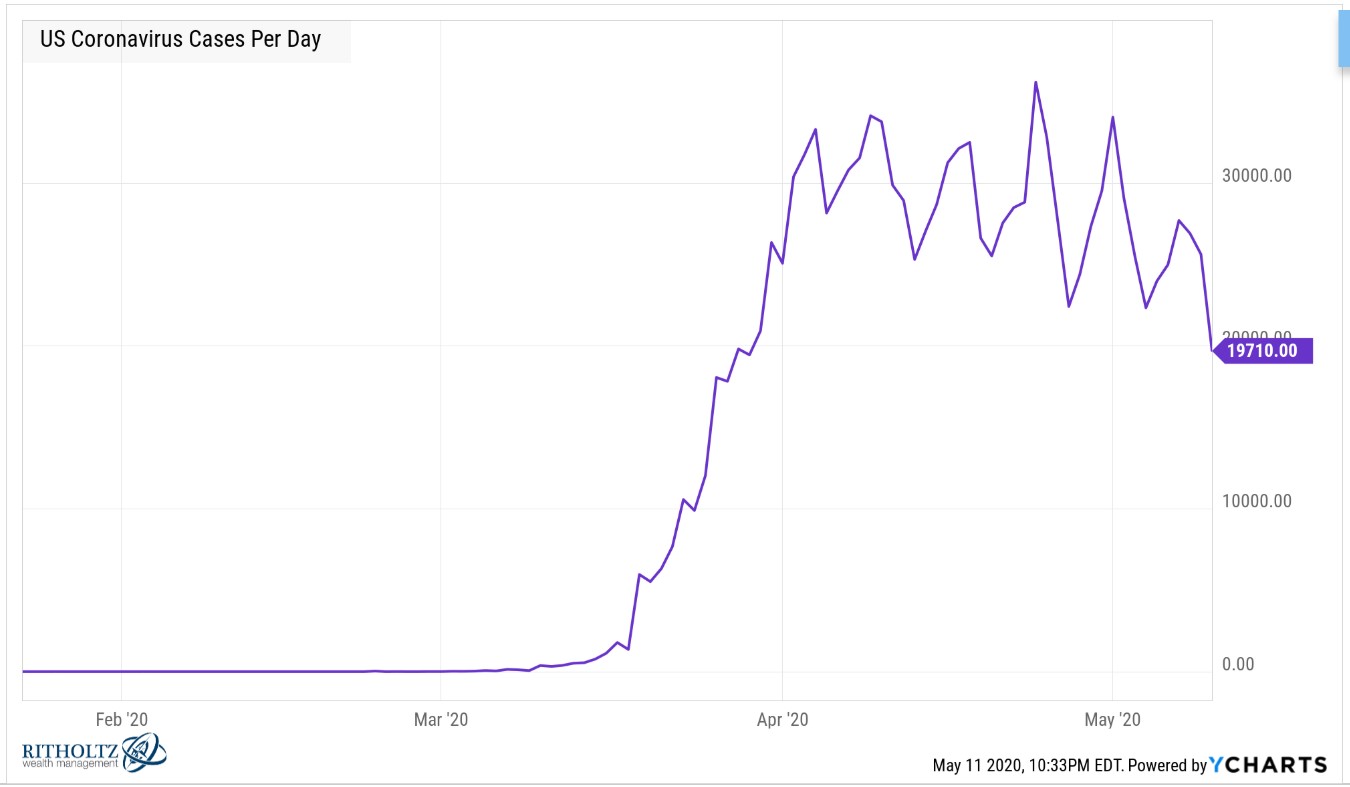 There are a number of reasons you could point to for these differences. South Korea had plans in place from previous infectious disease outbreaks this century. They learned from past mistakes (we better do the same) while we have been making them in real-time.

Thinking in terms of second-order effects, it would seem to make sense that South Korea’s impressive handling of the virus should allow the country to open up much faster than the United States.

And if they can open up faster, their economy should recover faster.1 And if stock markets are forward-looking you would expect to see South Korean equities outperforming U.S. shares this year.

Is this the case? 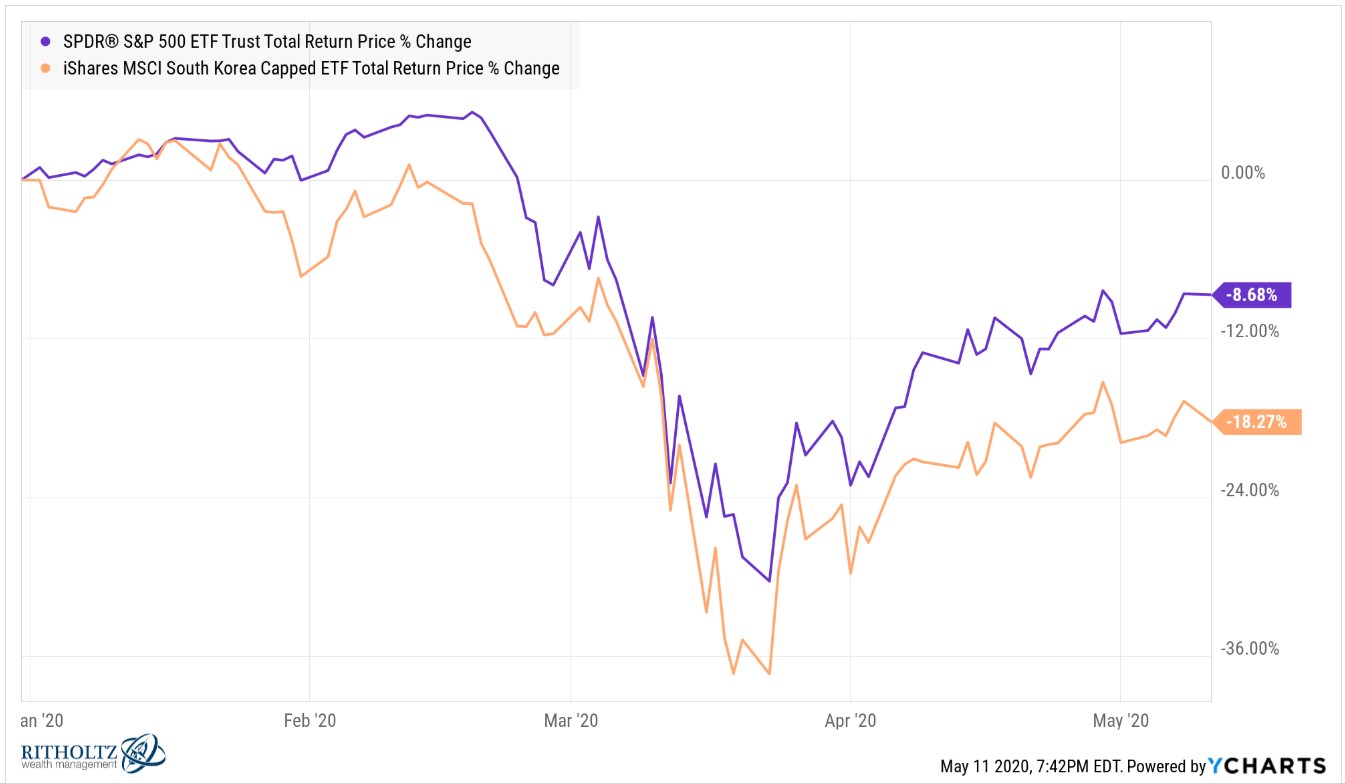 Part of the reason for this relative outperformance is the fact that the U.S. dollar has appreciated from a flight to safety this year. Here is what it looks like compared to the MSCI Korea Index (in local currency): 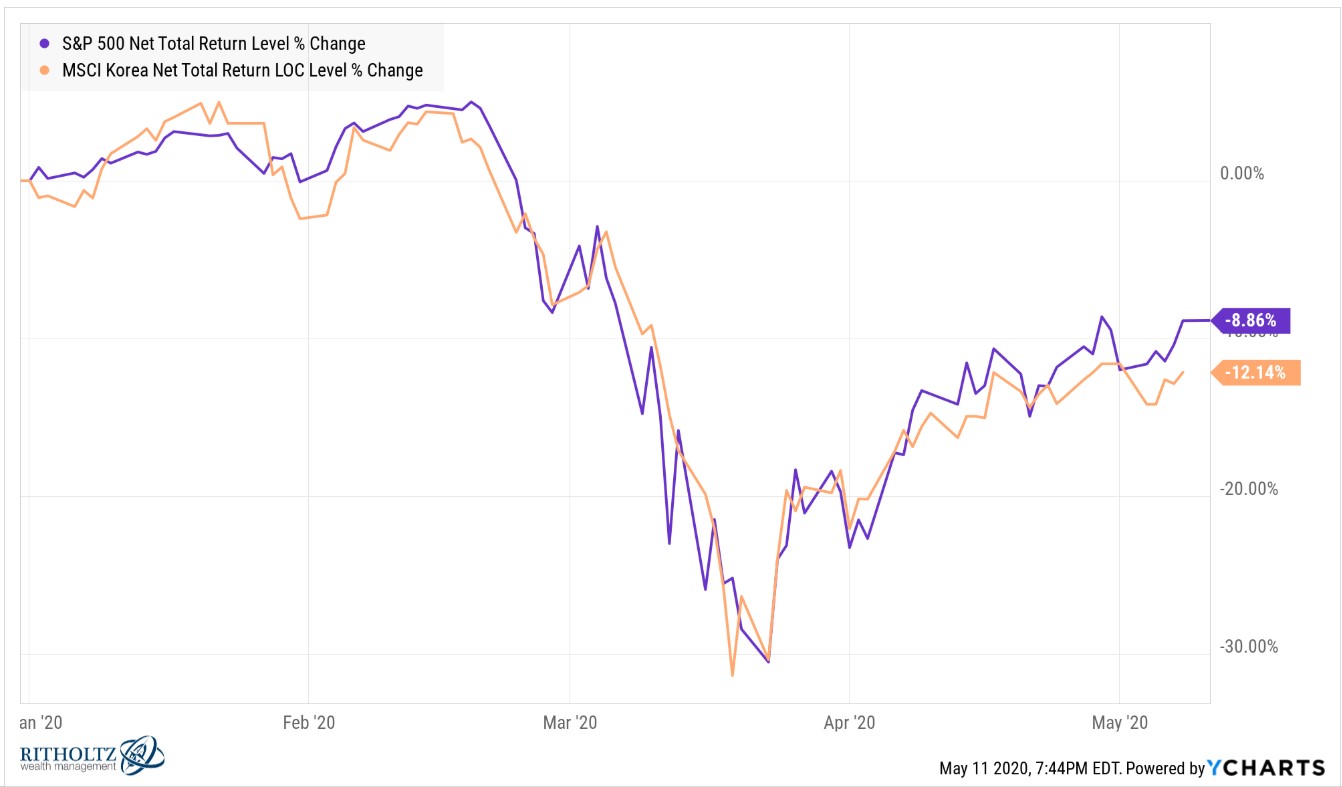 That’s a little closer but the U.S. is still superior.

In some ways this makes sense. Stock markets are driven not only by economic data but also by the composition of their companies (sectors, biggest stocks, etc.), where those companies derive their revenue from, and the expectations investors have built into their shares.

But if I would have given you the headlines and data at the start of the year I’m not sure how many investors would have picked the U.S. to outperform South Korea based on how things have played out.

This comparison may include two outliers in this ordeal so I wanted to look at the performance of other countries that seeing differences in their handling of the virus.

End Coronavirus has broken down countries by:

Here are the countries that are winning the fight: 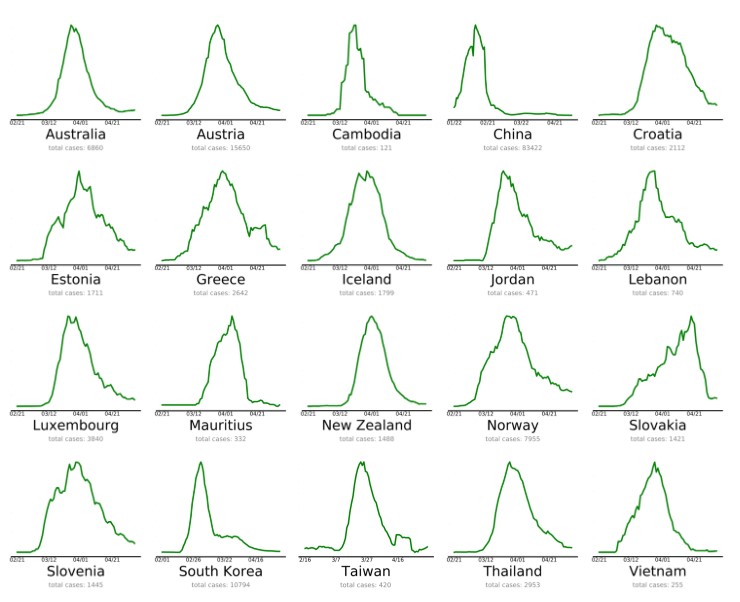 These countries are nearly there: 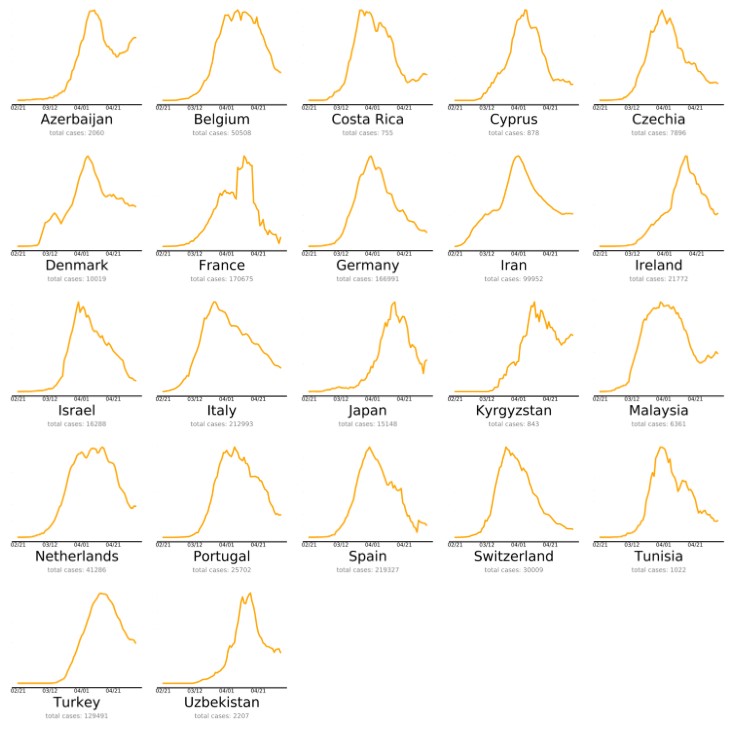 And here are the countries that need some work: 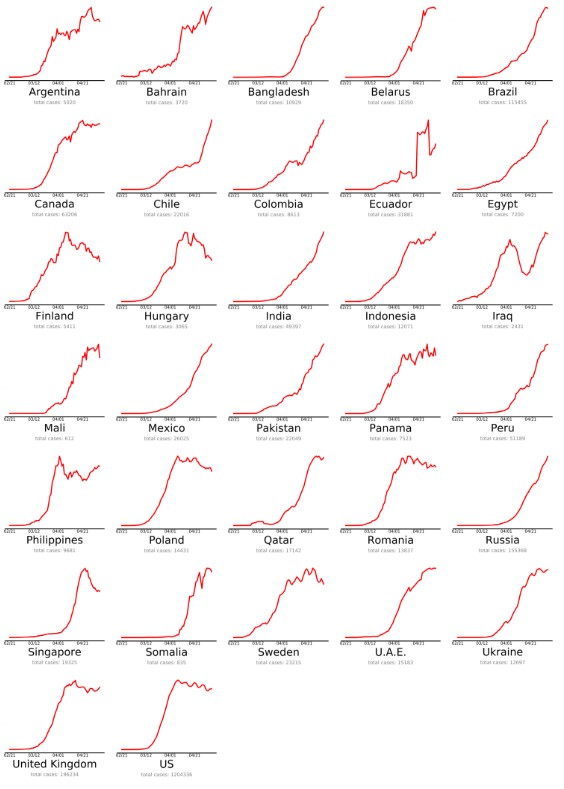 I went through each of these lists to check the year-to-date performance of each country’s stock market to see if there is any correlation between getting a handle on the virus and stock market performance in 2020. I looked at both ETF and local currency performance.2

Here’s the performance of the countries doing the best in containing the virus: 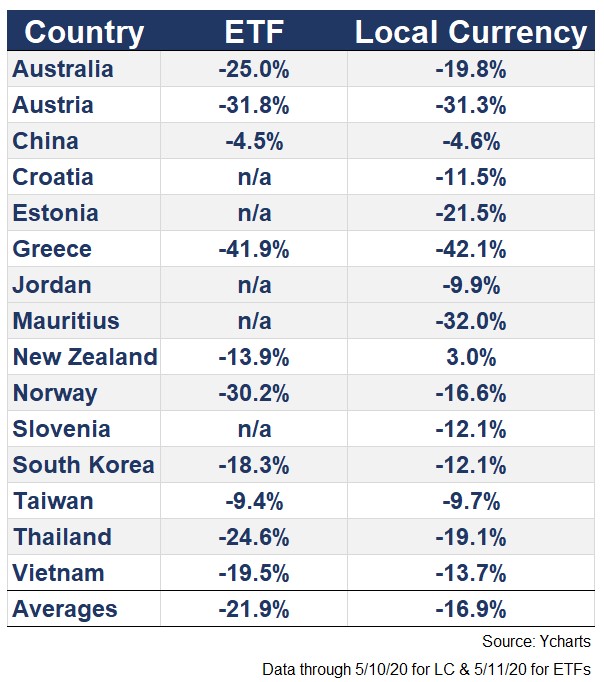 Not bad, but not great either. Now here’s the list of the countries that are almost there: 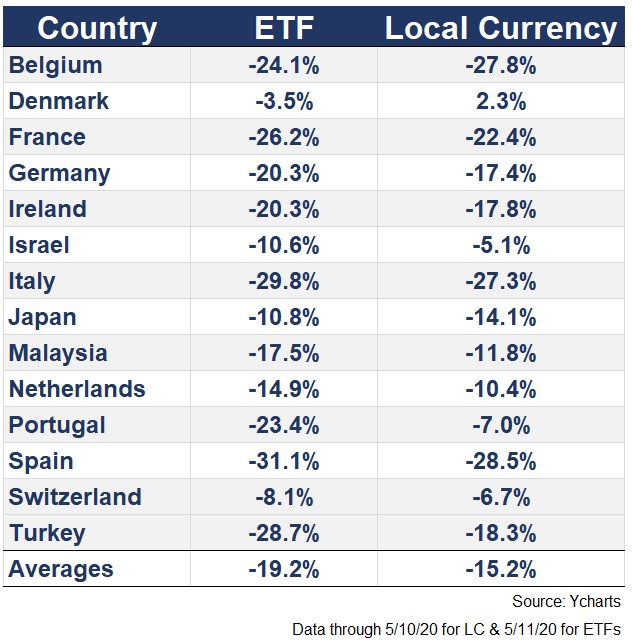 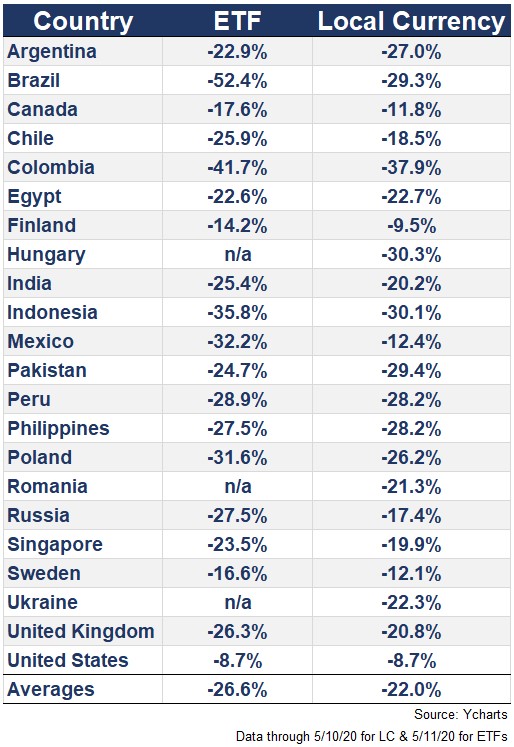 The U.S. is the obvious outlier in the third group just like there are countries in the other two lists that are seeing stocks get crushed despite having a better handle on COVID-19 among their population.

This list does actually have the worst average returns of the three groups so you could make the claim that these countries are seeing their markets get punished for not handling the crisis better.

But the range of results is so wide that it’s difficult to draw any concrete conclusions.

The fact that China was the first one to deal with the virus in a meaningful way lines up nicely with its relatively good stock market returns this year.

But then you have countries like South Korea, Germany and Japan that are handling the virus much better than the U.S. but are still underperforming the S&P 500.

A further complicating detail is the fact that globalization has made companies and countries more interconnected than ever so it’s not like these economies are on an island.

I guess my main takeaway after going through the data is this — the stock market is rarely a good gauge of the health and strength of your country, especially when dealing with a crisis like this.

The stock market is not the economy but it’s also not its citizens or government leaders or crisis response team either.

In the coming months, I would expect to see more mixed signals from global stock markets when it comes to success or failure in corraling the virus.

Further Reading:
Making Sense of a Stock Market That Doesn’t Make Any Sense

1“Recover” these days is a relative term, as with just about every other economic indicator. I’m not saying they’ll get back to pre-virus levels but whatever corona-capacity is.

2For the ETF returns I used the country ETFs (mostly iShares products) while local currency returns are from MSCI local currency country index data. There were a handful of countries on these charts that didn’t have data available so they’re not included in the tables.