I’m surprised we haven’t heard of a bazooka purchase from Warren Buffett and Berkshire Hathaway yet. Buffett is known for finding deals at favorable terms during a crisis.

There is no shortage of companies or entire industries that could use Berkshire’s war chest of cash at the moment. This feels like a ‘when?’ not an ‘if?’ situation and I’m sure plenty of investors will be interested in seeing what Buffett and Munger finally do when they make a decision.

Regardless of what the Oracle ends up buying, Buffett can’t time the bottom any better than you or I. He’s made plenty of opportune investments over the years but that doesn’t mean his success hinges on nailing the absolute nadir of the market.

It’s easy to become obsessed with predicting the bottom during a market crash. Positive outcomes during down markets have more to do with your time horizon as an investor than your ability to call the bottom.

When the stock market took a nosedive in the 1960s, one of Buffett’s clients called to warn him that stocks would surely fall further. Buffett responded with two questions:

Markets are driven by trends and psychology in the short-term so it’s possible stocks continue their downward trajectory. But the truth is no one knows how far these things will go or what expectations investors have already baked into current prices.

Markets feel more uncertain today than they have in some time. Just know that no investor has ever had complete clarity about the path markets will take over the short-to-intermediate-term. There are far too many variables at play to know what will happen with anything approaching certainty when it comes to market psychology.

Here’s a piece I wrote at Fortune about bear markets and bottom-fishing.

By my calculations, there have been just eleven bear markets with losses of 30% or worse over the past 90-plus years: 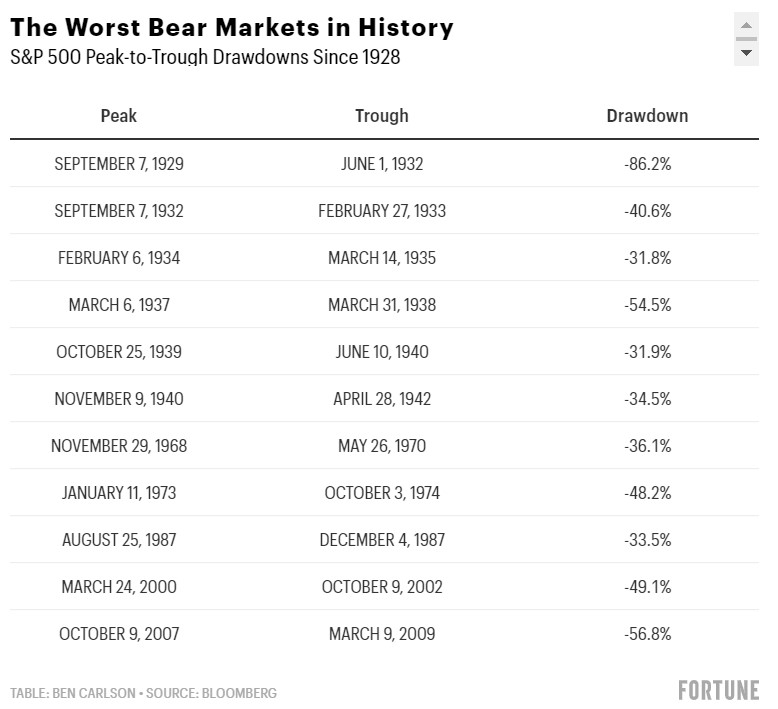 So the current iteration would be among the worst dozen or so market crashes in U.S. stocks.

Stocks could always go down further. No one knows how bad things will get economically considering the quarantine and stoppage of businesses are basically experiments being run in real-time. Things are going to get worse before they get better.

It may not feel like it now, but eventually we will recover. Financial markets will come back and the economy will mend itself. There will be much pain and suffering between now and then but we are a strong species and we will endure. 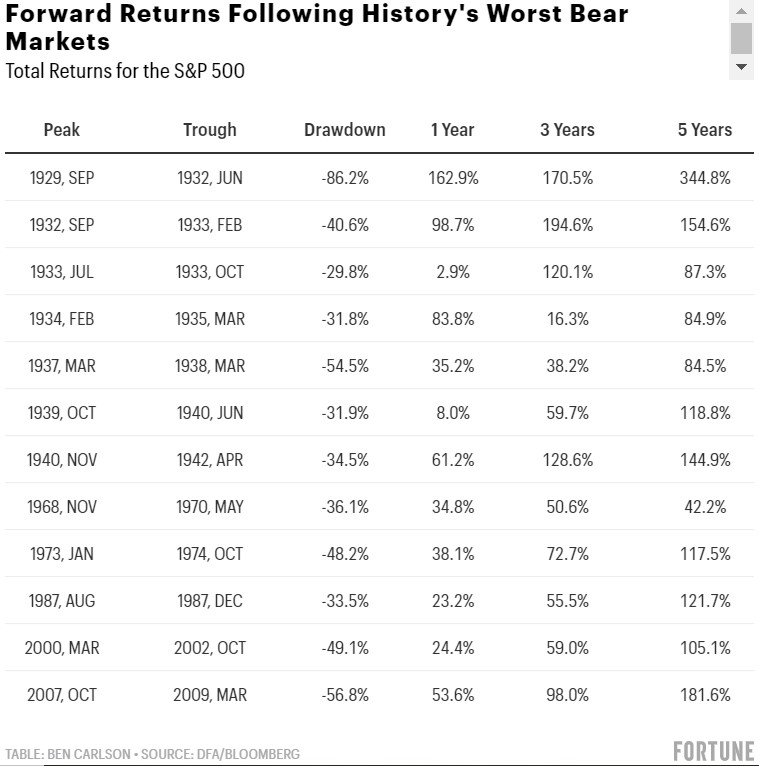 Average returns following bear markets have been 52%, 89% and 132% respectively over the ensuing one, three, and five year periods. Of course, these returns come from the depths of the bear markets.

No one knows when stocks will bottom because markets in freefall are mainly driven by a combination of emotion and herd psychology. It’s certainly possible there is another leg down from current levels.

Six out of the eleven bear markets of 30% or worse went down more than 40%. Stocks would have to fall another 15% or so from here to be down 40% in total.

Three of the eleven bear markets of 30% or worse went down more than 50%. Stocks would have to fall another 30% or so from here to be down 50% in total.

In mid-October of 2008, Warren Buffett penned an op-ed for the New York Times entitled, “Buy American. I am.” At that point the S&P 500 was nearly 40% off its highs and in the midst of the worst financial crisis since the Great Depression.

The financial world is a mess, both in the United States and abroad. Its problems, moreover, have been leaking into the general economy, and the leaks are now turning into a gusher. In the near term, unemployment will rise, business activity will falter and headlines will continue to be scary. So … I’ve been buying American stocks.

Stocks would fall a further 30% or so from the day Buffett said he was buying stocks. Even the world’s greatest investor cannot nail the bottom in a falling market.

But had you purchased a simple S&P 500 index fund on the very same day Buffett said he was buying, you would be up more than 220% right now (and that includes the recent sell-off).

The truth is no one knows how to spot a bottom in real-time. Stocks are down a lot and this has been a painful recalibration for investors. The good news for those who are still saving on a regular basis is that stocks tend to have higher expected returns following a market crash

If you have a long time horizon, even buying before stocks bottom can lead to positive outcomes.

This piece originally ran at Fortune. Reprinted here with permission.