Your personality has a lot to do with the kind of investor you are. Some people are predisposed to follow trends and fads. Others are constantly looking to buy a dollar for fifty cents. The latter group has had a much tougher go at it during the current bull market because most corrections have been over relatively quickly.

But the tide has not lifted all boats during this run up in prices. There are a handful of sectors and strategies that have been left behind. Here’s a look at some of those places for those who are more inclined to buy beaten-up shares.

Things are pretty good for investors at the moment. The S&P 500 continues to hit new high after new high in 2019. The gains this year have more than made up for the nearly 20% loss near the end of last year. While U.S. markets have outperformed handily on a relative basis during this cycle, foreign stocks have officially joined the party, with the MSCI All-Country World Index breaking out to new highs this year as well.

New highs are great for those holding stocks in their portfolio but there is a downside when stocks seemingly do nothing but rise. Anyone who’s been holding cash waiting for lower prices and a better entry point or those with new savings to deploy into the markets have had to do so at higher and higher prices. Rising prices are a catch-22 in that they’re a welcome sign for current returns but almost certainly detract from expected returns, given that dividend yields and valuations tend to rise when markets move higher.

The good thing for investors who are more comfortable buying when there’s blood in the streets is there will always be a bear market somewhere, even when the broad stock market is killing it. Here are three areas of the market that have been left behind to some extent during this bull market:

Oil prices hit more than $150/barrel in June 2008. Since then, oil prices are down two-thirds while the energy sector (ticker: XLE) of the S&P 500 has fallen more than 13% versus a gain of more than 200% for the overall index. Energy has been by far the worst sector during this period and it’s not even close. Even financials (ticker: XLF), which were crushed in the crisis, have outperformed energy since the summer of 2008 by more than 135%. 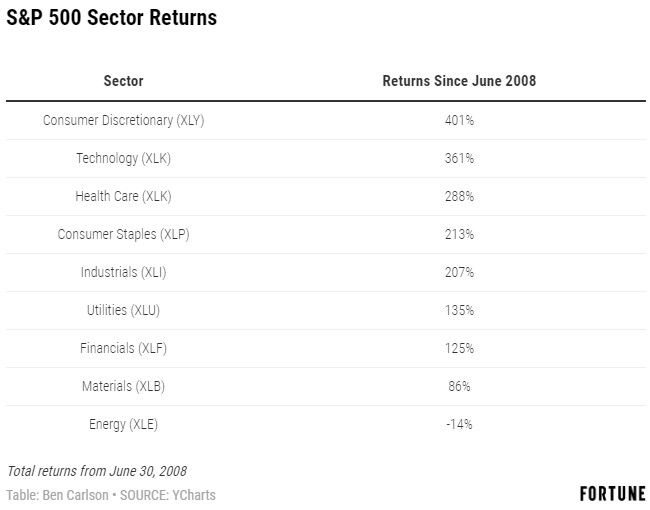 The energy sector ETF (XLE) currently yields 3.8% for your troubles if you’re thinking about trying to catch a falling knife here.

If you want to find stocks that have little correlation to the overall stock market, look no further than precious metals & mining stocks. These commodity producer stocks often exhibit pulverizing volatility, both to the upside and the downside. The Vanguard Global Capital Cycles Fund (ticker: VGPMX) has not only trailed the overall stock market during this cycle, but it’s also in the midst of a crash. Over the past 10 years, VGPMX is down nearly 50% while the S&P 500 is up more than 240%. 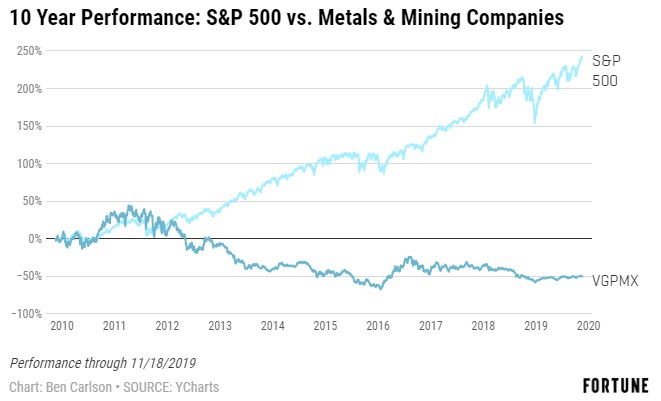 Those 50% losses are despite a 50% gain in 2016 alone. From 2011-2015 this fund was down close to 75%. Investors are often in search of asset classes with low correlation to the broad market to add portfolio diversification benefits. Precious metals & mining companies seem to fit that bill but the catch with uncorrelated assets is sometimes that means eating big losses while the rest of the market screams higher.

During the dot-com bubble in the late-1990s, growth stocks stomped all over value stocks as investors rushed into technology companies in the “new economy.” By almost every accepted definition of “value”, growth stocks were more expensive than their value counterparts at the peak of that bubble on a relative basis than at any time in history. When the bubble deflated, value went on a huge run of outperformance over growth for years to come.

Many fundamentally-inclined investors are hoping for a repeat of this situation as growth has once again decidedly beat the pants off value stocks during this cycle. High growth companies such as Amazon, Apple, Netflix, Google, and Facebook have attracted investor mindshare while boring old value stocks have been left in the dust.

It’s taken some time but it looks like value stocks are finally getting cheap enough, at least according to AQR’s Cliff Asness. Using a number of different value metrics, Asness showed in a recent research piece that growth is more expensive now than at any time other than the dot-com bubble. Asness writes, “Excluding the tech bubble the value of value is the cheapest it’s ever been by a fairly decent margin.” 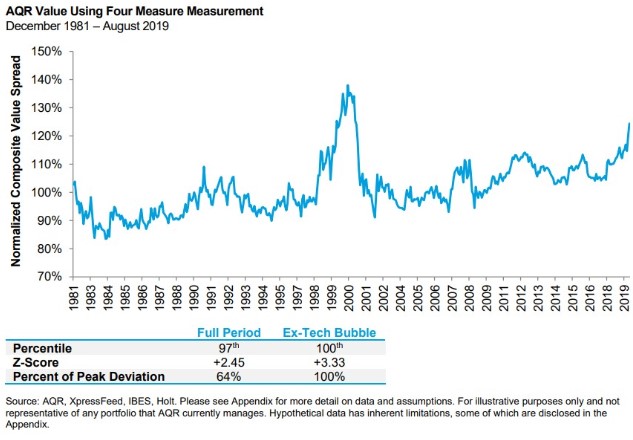 Of course, the hard part with these things is always the timing. Just because something is down, doesn’t mean it can’t go down some more. And just because something is cheap, doesn’t mean it can’t get cheaper. There’s a reason energy stocks and metals & mining shares have been hit so hard since the financial crisis—commodities prices themselves have been battered while inflation has been kept under control. And value companies have likely underperformed growth companies because software is eating the world, the growth in intangible assets, and the willingness of investors to pay up for growth in a world awash in capital.

One of the hardest things to do as an investor is determining whether you’re being disciplined or delusional by sticking with an underperforming investment. I’m guessing those who have stuck with energy stocks, metals & mining companies, and value stocks feel a bit delusional at the moment. Time will tell if their disciplined delusion will pay off.