Just a few short years ago you lived through the worst one-day stock market crash in history. Despite seeing stocks fall more than 20% in a single day and more than 30% in a week, you did pretty well for yourself over the course of the decade (assuming you didn’t freak out and sell).

How many investors at the time would have believed the next decade would be even better?

But bull markets don’t follow the rules of common sense. They’re built on momentum, emotion and the fear of missing out.

So following 17% annual returns in the 1980s, instead of a reversion to the mean, investors were awarded even higher returns!

The S&P rose 425% during the 1990s, good enough for 18% annual returns. Investors were absolutely spoiled by the stock market for 20 years.

Or let’s assume you’re an investor in Japanese stocks during the 1970s. Basically, the same exact returns as investors in the U.S. received during the 1980s: 400% total returns or 17% and change annually.1

Not only were returns better in the 1980s in Japan, they were ridiculously better. Japanese stocks rose nearly 1200% in total or almost 29% per year. Returns were so juicy in the 1970s and 1980s in Japan, that despite horrible returns ever since then (less than 1% annually since 1990), the MSCI Japan Index is still up 9% per year since 1970.

What does this have to do with today’s markets? Well, what if we’re not in the bottom of the ninth but the top of the 5th? What if the past 10 years were unbelievable for U.S. stock market investors but the next 10 years are just as good or better?

Would I bet my life on this outcome?

Of course not. There are too many differences to count between these two periods and even if there were similarities, no two market cycles are ever exactly the same.

But what we can learn from history is that bull markets tend to run for much longer than most investors would ever think is possible. Here are S&P 500 returns broken out by various cycles going back to the late-1920s: 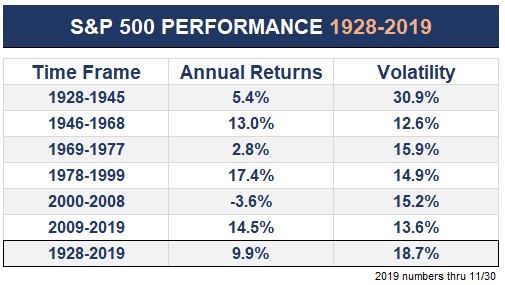 Am I saying stocks are guaranteed to continue ripping higher for the foreseeable future? No. In fact, I’ve been lowering my own expectations for future returns for years now. But should we be surprised if the stock market continues to offer above-average returns for much longer than most investors assume is possible?

Stranger things have happened before.

It’s best to be realistic about expected returns from current levels but you also have to account for the fact that stock market outcomes exist within a wide range of possibilities.

Historically, bull markets last for much longer than most investors realize.