The fall of 2008 feels like a lifetime ago but there are plenty of moments from the financial crisis that are seared into my memory.

The investment team I was on was talking to one of our hedge fund managers in late-September 2008, in the eye of the storm, as financial institutions were going out of business, being bailed out, and merging with one another at a ridiculous pace.

At that point no one even cared about fund performance. Everything was bad (save for high-quality bonds, cash and some managed futures strategies). Everyone just wanted to know what was going to happen next.

This portfolio manager informed us he just got off the phone with his wife and told her to get as much cash out of the bank as possible. He was worried a run on the banks was a real possibility.1

As Congress was debating the merits of a bailout plan for the financial system, President George W. Bush said, “If money isn’t loosened up, this sucker could go down.”

We were probably closer to a depression than most people realize had a few things happened differently.

I could eat these words in the future but it feels like the Great Recession is about as bad as it could get in terms of a reckoning in the financial system. Some people seem to think (hope?) the entire system collapses someday. Maybe that happens or maybe an alien invasion destroys the financial markets as we know them for good.

Short of Independence Day 3, I’m not sure the U.S. could tip over into another Great Depression-like scenario if it didn’t happen in 2008. Michael and I discussed the possibility of this on the podcast this week:

The U.S. economy is far more mature, dynamic and diversified, markets are more professionalized, and the Fed has more power to step in as the lender of last resort than it did in the 1930s.

And as bad as things felt during the Great Recession, the Great Depression was otherworldly in terms of market volatility (not to mention the economic effects).

Never say never in the markets but I’m thinking it would be tough to see that happen in the U.S. again.

But that doesn’t mean we can’t see depression-like scenarios in other countries where markets are less dynamic, diversified and mature.

In fact, Greece is currently in a tailspin that’s worse than anything seen during the Great Depression. Here’s the current drawdown of the MSCI Greece Index: 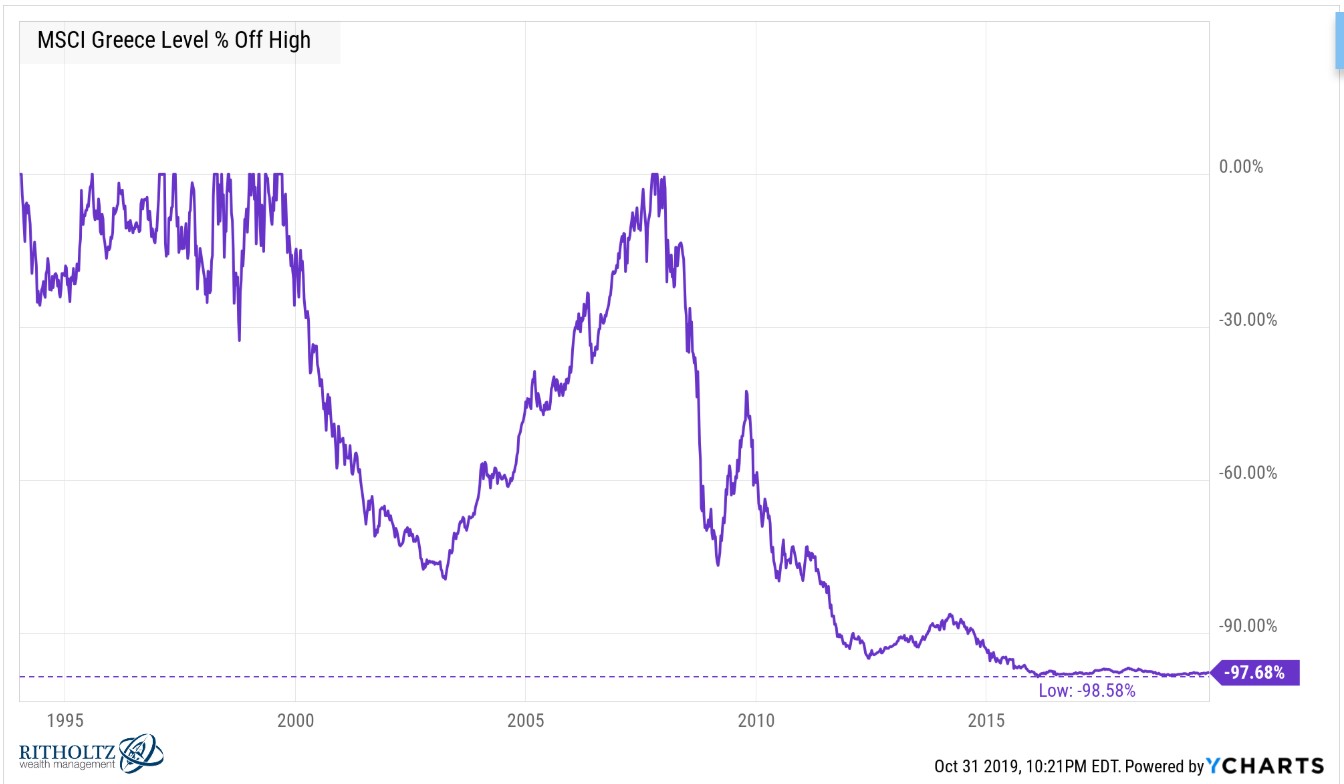 That’s right. This index of Greek stocks is currently suffering a 97% drawdown from the highs reached prior to the financial crisis.

And this is despite the 36% returns for Greek stocks in 2019. There are reasons for these losses of course. There are just 32 holdings in this index, with 65% of the value in the top 10 names alone.

Things are slowly getting better in Greece with signs of growth and bond yields falling substantially since the height of the European debt crisis. But the country had negative economic growth for a number of years following the crisis. GDP contracted from 2008 all the way to 2015.

So maybe it would be tough to see another Great Depression in the U.S. But it can certainly happen to smaller and emerging economies that don’t have some of the built-in advantages we have in the U.S.

This is about as good a reason as any to avoid home country bias in your portfolio, especially for non-U.S. investors.

Further Reading:
10 Things You May Not Know About the Great Depression

Here are some more highlights from this week’s podcast, including even more thoughts on share buybacks:

1For some reason I never got scared enough to go this far. Maybe I was young and naive but I didn’t think things could get that bad even in the fall of 2008.