The Great Financial Crisis was the worst economic and market meltdown we’ve experienced in a generation. But compared to the Great Depression, it was a walk in the park. Here’s the breakdown:

That period in time fascinates me to no end because I can’t imagine what it would have been like to live through (along with the fact it was sandwiched between two world wars).

I’m late to this but I finally got around to reading John Kenneth Galbraith’s book on this period, The Great Crash 1929. This book was amazing, in part because Galbraith is such a talented writer, but also because of the information gleaned.

Here are 10 things from this book that you may not have known about the Great Depression:

1. There was no huge uptick in suicides following the market crash. The assumption is there were a large number of stock market traders who took their own lives following the crash. This is a myth. Here are the numbers for New York City by year showing no noticeable uptick: 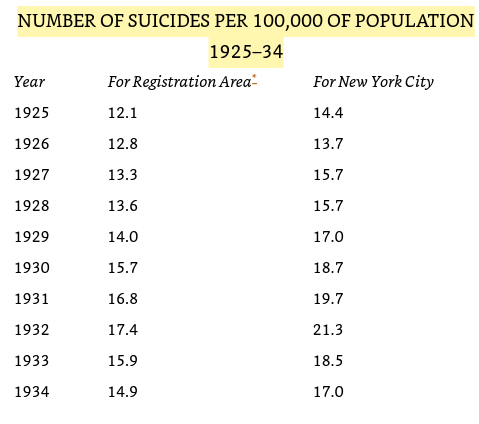 It seems certain that the economists and those who offered economic counsel in the late twenties and early thirties were almost uniquely perverse. In the months and years following the stock market crash, the burden of reputable economic advice was invariably on the side of measures that would make things worse.

Secretary of the Treasury Andrew Mellon’s advice was to “liquidate labor, liquidate stocks, liquidate the farmers, liquidate real estate.” Not exactly the best remedy during a depression.

3. The Fed was also clueless. The Fed missed the most recent crisis but you have to give them credit for how things have been handled in the aftermath. Not only did the Fed lower interest rates in 1927, basically adding lighter fluid to the fire of speculation, but they made things even worse in the downturn according to Galbraith:

4. Add both political parties to the list of culprits who were wildly unhelpful. Both Republicans and Democrats assumed balancing the budget during the Great Depression would make things better. Government spending was needed more than ever when everyone else was cutting back but the politicians didn’t realize this:

For Republicans the balanced budget was, as ever, high doctrine. But the Democratic Party platform of 1932, with an explicitness which politicians rarely advise, also called for a “federal budget annually balanced on the basis of accurate executive estimates within revenues . . .” A commitment to a balanced budget is always comprehensive. It then meant there could be no increase in government outlays to expand purchasing power and relieve distress. It meant there could be no further tax reduction. But taken literally it meant much more. From 1930 on the budget was far out of balance, and balance, therefore, meant an increase in taxes, a reduction in spending, or both. The Democratic platform in 1932 called for an “immediate and drastic reduction of governmental expenditures” to accomplish at least a 25 percent decrease in the cost of government.

5. Jesse Livermore was not colluding to bring down the market. At least that’s what the infamous trader claimed. Many thought Livermore was heading up a syndicate that was driving the market down. He said at the time, “What little business I have done in the stock market has always been as an individual and will continue to be done on such basis.”

6. “Everyone” was not invested in the stock market before the crash. When people discuss the roaring 20s, there’s a wide acceptance that “everyone” was invested in stocks, which is one of the reasons they crashed so badly as investors rushed to the exits. The numbers don’t bear this out.

The member firms of twenty-nine exchanges in that year reported themselves as having accounts with a total of 1,548,707 customers. (Of these, 1,371,920 were customers of member firms of the New York Stock Exchange.) Thus only one and a half million people, out of a population of approximately 120 million and of between 29 and 30 million families, had an active association of any sort with the stock market.

So a little more than 1% of the population traded stocks in 1929.

7. Investment trusts (and leverage) did explode in the late-1920s. Investment trusts were basically the first mutual funds. There were only 186 by 1928 but in 1929 there was a new one created every single day, on average. Total AUM increased elevenfold between 1927 and 1929 and leverage was a huge selling point:

8. Irving Fisher doubled, tripled, and quadrupled down on his market predictions. The Yale economist is infamous for proclaiming the stock market had reached a “permanently high plateau” just before the crash.

Fisher actually doubled down on numerous occasions. Following the first wave of selling, he said, “There may be a recession in stock prices, but not anything in the nature of a crash.”

After stocks fell some more in the fall Fisher said the decline had been a “shaking out of the lunatic fringe.” He expected stocks to go higher from more productive American workers.

After these calls failed and stocks fell even further, Fisher wrote a book about to explain himself called The Stock Market Crash — And After but by that point, few would listen to his pronouncements about the markets.

9. John Rockefeller picked a bad time to come out of hiding. Rockefeller is one of the richest Americans in history but later in his life, he shunned the public spotlight. It took some convincing, but Rockefeller made his first public statement in several decades in the fall of 1929 after the first wave of selling in stocks:

Believing that fundamental conditions of the country are sound . . . my son and I have for some days been purchasing sound common stocks.”

Comedian Eddie Cantor later said, “Sure, who else had any money left?” Obviously, Rockefeller was a tad early on this one as stocks continued to fall for a couple more years in spectacular fashion.

10. The term “healthy correction” may have come from this time frame. The financial editor for the New York Times was quoted as saying, “Probably none of the present generation will be able to speak again . . . of a ‘healthy reaction.’ There are many signs that the phrase is entirely out of date.”