On this week’s podcast, Michael and I discussed some things that may end with the baby boomer generation:

People these days love to predict the end of things but I’m not smart to know when preferences will shift for good. Many entrenched trends likely won’t go away forever but simply decline in prominence over time. Here are some things that could be on the decline as the next generations slowly begin to take over:

Traditional banks. We’ve already been over the fact that old school banks are fleecing their customers by paying them next to nothing on their savings.

But it’s going to take a looooooong time for fintech firms to breakthrough in financial services before they can reach scale. The next generation will be way more accepting of new and more efficient ways of banking but I don’t think the big names are going down without a fight.

Here are two banks that seem like they get it and are trying to gain traction with young people: Goldman Sachs (with their Marcus online savings account) and JP Morgan (with their Chase Sapphire Preferred credit card and checking account).

So the biggest trend in this space will likely be that more banking moves completely online and lots of empty brick-and-mortar banks in the future.

Organized religion. More and more young people are religiously unaffiliated than ever before: 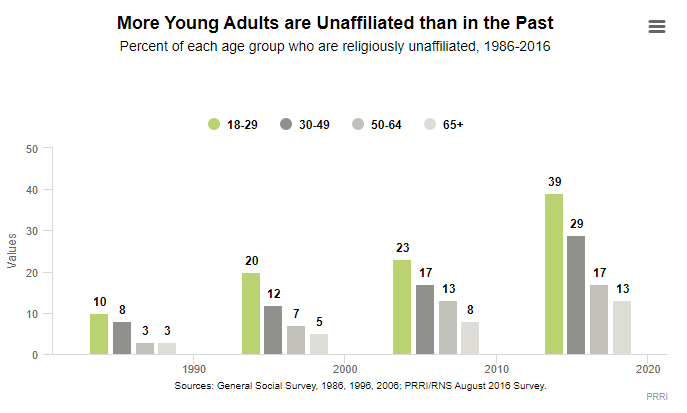 Go to just about any church in America on Sunday and you’ll notice the majority of the congregation has gray hair. It’s difficult to point to an exact reason for this but it appears young people are far more skeptical of organized religions than previous generations.

Conventional home ownership. Young people will still buy houses because that’s what you do when you get older but I could see the dynamics of the housing market changing in the decades ahead.

Whether it’s trading a piece of your equity for help with a down payment or going in with professional investors to buy a home, it’s possible the idea of conventional home ownership, especially on the expensive coasts, could look different to make it more affordable to buy.

Residential real estate is an enormous market so the finance industry is going to find unorthodox ways to make money in the space at some point. That could upend the traditional forms of home ownership.

Cable. This one is easy and once Jeff Bezos or Google or Facebook starts offering internet access the cable companies are going to see a mass exodus (although I will be the last person in America who owns a cable bundle and go down with the sinking ship).

Malls. In middle school the mall was THE spot where my friends and I would go to hang out if there were no other options. Kids these days have plenty of other options, including simply staying in touch on social media or playing online video games against one another.

I’m guessing malls in affluent areas will still do well but the increasing ease with which you can have stuff shipped to your front door will likely mean many malls will go the way of Sears.

Going to the movies. With bigger TVs and better entertainment options, it seems like going to the movie theater could turn into something that’s only reserved for must-see movies (of which there are fewer and fewer every year).

I’m guessing we’ll eventually be able to simply pay a higher rate to see new releases sooner and sooner at home (which might still be a push financially if you don’t have to pay concession prices).

Voicemails. It’s possible most personal phone calls could all but go away as well as young people seem to prefer texting to actually talking.

The NFL. I love football but eventually the brain injury stuff is going to catch up to the NFL. Much like Apple as a dominant company, things will more or less stagnate from here. The NFL will remain king of the professional sports world but their growth days are behind them.

QVC. I like the idea of Instagram becoming a new version QVC. They already know my tastes better than any ad network on the Internet. Maybe QVC will adapt but it’s hard to believe the younger generations will buy stuff on TV until it’s fully integrated with the Internet.

Golf and baseball. Both of these sports take a long time to play and I’m not sure young people have the patience to keep them as popular as they once were.

Gold. Could bitcoin replace gold as a “store of value” or place to put your money when you mistrust the government? Anything is possible but I don’t see how young people who grew up in the age of technology would trust a yellow rock over a line of code.

Screwing over the next generation. Kidding…sort of.