What’s the deal with inflation? It’s bad for our individual spending power. It erodes the value of our money. Yet, the economists want 2% inflation per year every year. Why do we need inflation for a healthy economy? Why can’t we have a 0% inflation goal?

I get the idea behind being against inflation. Why would people want to see prices rise over time? Wouldn’t people benefit from lower or stable prices?

In theory, this seems rational but theory rarely works in the real world. In the real world, the economy operates based on expectations. And, right or wrong, inflation and deflation bring about a very different set of expectations about the future, which can subsequently impact the present.

It’s not necessarily that inflation is good but that it’s less bad than deflation. Deflation can create a brutal negative feedback loop. When prices fall people stop buying stuff today in the hopes that it will be cheaper in the future.

Deflation is one of the reasons the Great Depression was so awful. Prices fell more than 10% across the board. In the early-1920s, there was a depression that saw deflation in prices of nearly 15%. Such drastic changes to the price level are one of the many reasons this period was filled with massive booms and nasty busts.

Obviously, there’s another side of this coin which is a period like the 1970s which saw runaway inflation. That’s no good either. But subdued inflation leads to better expectations for the economy than deflation.

When prices are rising, people extrapolate those increases indefinitely into the future. Higher prices mean people will buy now to avoid paying more in the future. Buying more stuff now increases the sale of more products and services, which helps keep people employed, and should (in theory) keep wages on the rise.

People don’t always act this way in their purchase decisions, but you get the idea.

Debt gets a bad rap and its effects can be a killer but innovation, progress, and business formation don’t move forward without some borrowed money.

And inflation is a much better deal for those who borrow money. Anyone with a fixed rate mortgage should pray for a little inflation over time so they’re paying back their loans with less purchasing power over time. Deflation is actually better for the lender than the borrower.

Inflation is also more of an output than an input. Economists want economic growth because eventually, growth should cause wages to rise. And if wages rise, we should experience some inflation.

This chart of the purchasing power of the dollar has been used to scare more than a few people about the effects of inflation: 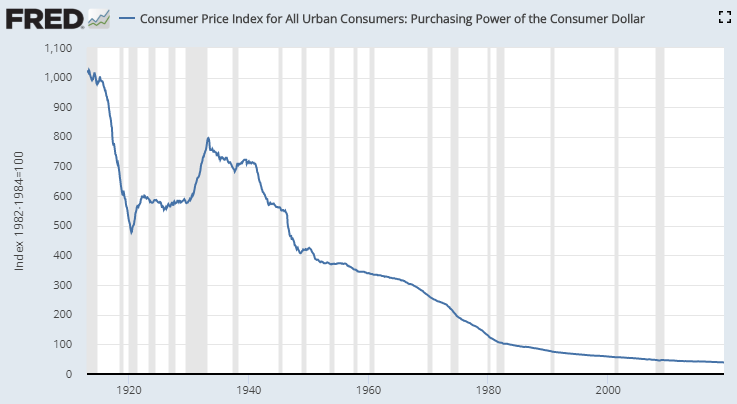 Just look at how much value has been destroyed by the effects of inflation over time!

This idea misses the point that, duh, burying your money in the backyard is not a productive use of capital over the long-term. Even investing in the safest of short-term assets, one-month treasury bills, would have given you a return of 0.4% over the rate of inflation since 1926. You have to take some risk with your money to keep up with inflation.

And one of the reasons even short-term paper offers a yield on your savings is because of the threat of inflation over time. Lenders must be compensated for taking on risk and the biggest risk involved when lending money is, you guessed it, too much inflation.

Inflation is not perfect because there’s no way to perfectly align prices across all goods and services. This chart is terrifying: 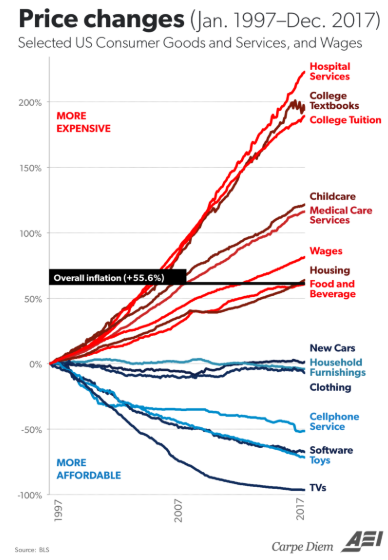 We’re never going to get the Goldilocks situation where inflation comes in exactly where everyone wants it.

But I would take some inflation to some deflation any day of the week.

Inflation is the lesser of two evils when it comes to price stability.