Life spans continue to grow in the United States and the United Kingdom, although the pace is relatively slow.

Between 1960 and 2014, average life expectancies have risen 13% and 14%, respectively, in two of the wealthiest countries in the world. That works out to an increase of just 0.2% per year, slow but steady progress.

The growth in wealth in these two countries has far outpaced the increase in life expectancy over this time, with real disposable income rising by nearly 200% in both countries, good enough for an annual increase of around 2% per year. Spending after accounting for inflation rose at a similar clip over this 50+ year period. 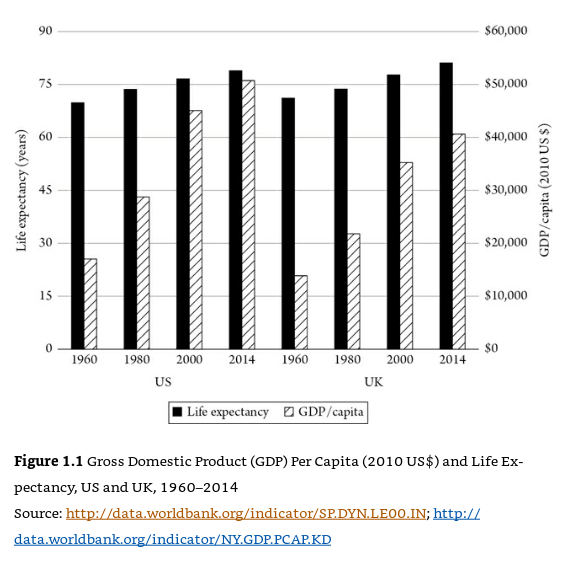 Putting this into a relationship into ratio form, this would mean our spending power has almost tripled in this time if you were to look at in terms of the increase in years of life expectancy.

Daniel Hamermesh explains in his book Spending Time, “Put another way, our time is now worth more—it is more valuable—and increasingly scarcer than the incomes we use to buy things.”

This could be part of the reason people always feel so busy. It seems like there isn’t enough time in the day to do all we want because there is more money sloshing around but the same amount of time.

Time is the most precious of assets but it doesn’t grow all that fast.

It may not feel like it to everyone, but the developed world now has more money to spend but less time to do it. The problem is these numbers are averages which helps explain why so many people have a hard time ever saving money.

Trying to keep up with people that make more money than you is a never-ending game because there will always be people willing to outspend you.

I’m heavily in the anti-survey camp but a recent wealth survey from Charles Schwab had some relevant results on how this idea may be impacting our spending habits:

According to the survey, three in five Americans pay more attention to how their friends spend compared to how they save, with an equal number saying they’re at a loss to understand how their friends are able to afford the expensive vacations and trendy restaurant meals they portray on social media.

We discussed these results on the podcast this week and both agreed that 3 in 5 number feels low:

People don’t compare their own savings habits to the savings habits of others because you can’t see savings. Spending results in stuff while building wealth is the absence of stuff.

Unless people start posting their Vanguard statements on Instagram for all their followers to see, the savings habits of others will remain in the dark.

Social media may amplify how we view the spending patterns of others but this trend has been in place for quite some time now.

I like buying stuff as much as the next guy but to ever truly build wealth you must be willing to forego some stuff.

If you can’t prioritize your spending habits, you’ll never be able to save enough to get ahead.

Further Reading:
How Hard is it to Become a 401k Millionaire?