The current retirement system leaves much to be desired.

There are a decent number of people taking advantage of tax-deferred savings vehicles but it’s a fairly small number that ever reaches millionaire status in these accounts.

There’s nothing special about hitting the $1 million mark. Most people will likely never get there (the current number of millionaires in the U.S. is around 5% of the population or 1 out of 20 people) while for some it’s not enough to keep up with their lavish lifestyles.

I wanted to run the numbers to see how feasible it would be for people of different age ranges and saving styles to hit this big round number.

The max contribution limit for 401(k)s at the moment is $18,500 (not including an employer match). Here are the investment returns required to reach a million dollars by age 65: 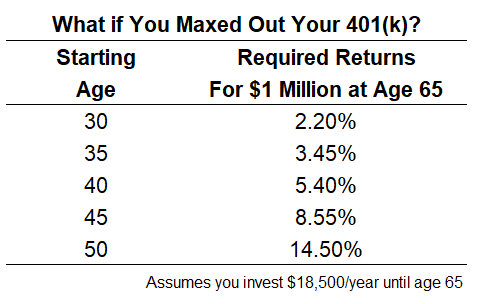 It’s not a ground-breaking discovery to point out how helpful it is to begin saving at a young age. The required returns to hit $1 million for someone who maxes out their 401(k) in their 30s is a fairly low hurdle rate. Wait to start saving until you’re in your late-40s or 50s and it’s much harder to get to seven figures.

Obviously, maxing out your retirement contributions is not an easy task.

According to Vanguard just 4% of savers in their defined contribution plan who earn $50,000 a year max out their 401(k). For those making between $50k and $100k that number jumps to 11% of participants. And 32% of people making $100k or more max out their tax-deferred savings.

It’s also tough to go from zero to sixty and begin maxing out your retirement account without slowly building up to that level. Very few people max out from day one.

So let’s look at an example of some hypothetical 30-year-olds who save at different levels and slowly increase the amount they save each year until they hit the max (increase by $100/month each year until max is reached). Here are the required returns to hit $1 million by 65:

And the same scenario using age 40 as the starting point:

A few observations and caveats: