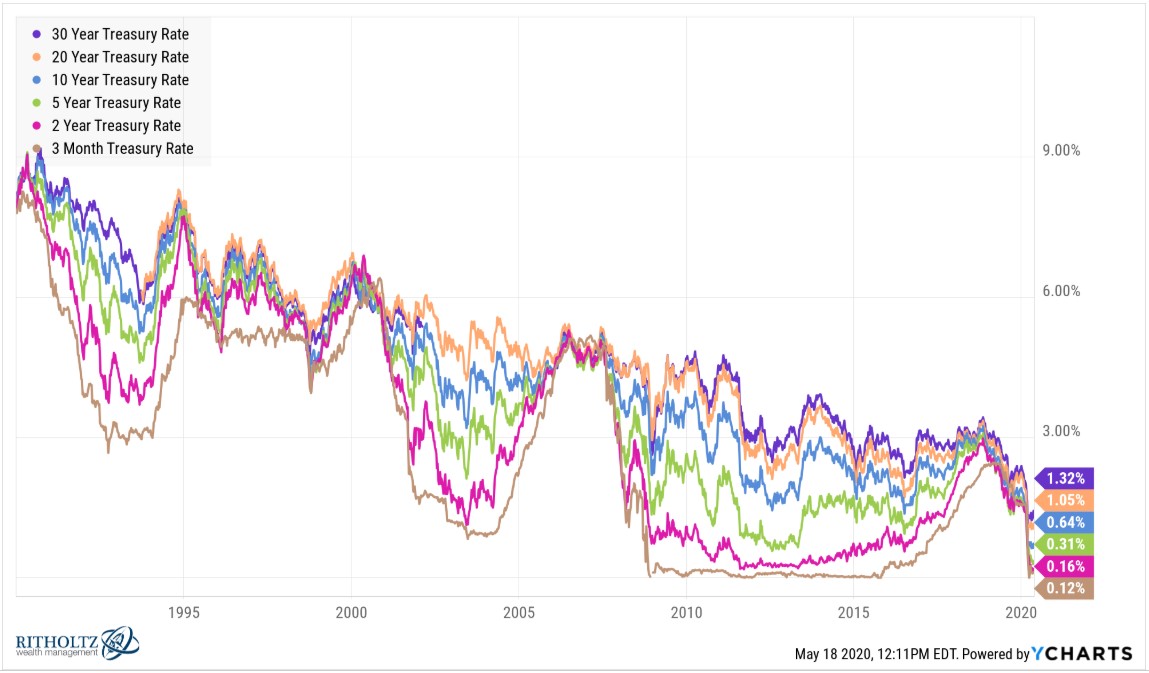 The correlation between starting yields and future long-term returns is very high, meaning you can use these rates as a decent approximation of forward bond returns.

In other words, don’t expect much from the bond portion of your portfolio.

When you compare today’s yields with annual returns of the past, things look pretty bleak today across the various maturities. 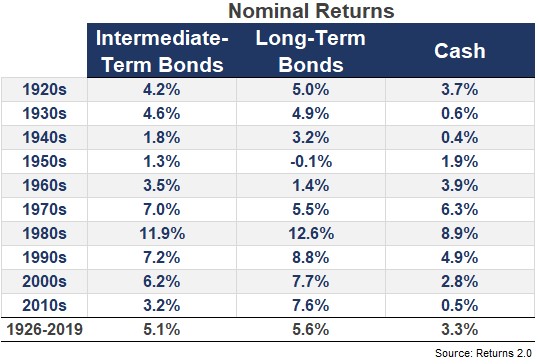 Of course, these are nominal returns.

The biggest risk to fixed income investors is inflation, not rising interest rates like many people assume. And low real bond returns have been low and even negative for entire decades in the past: 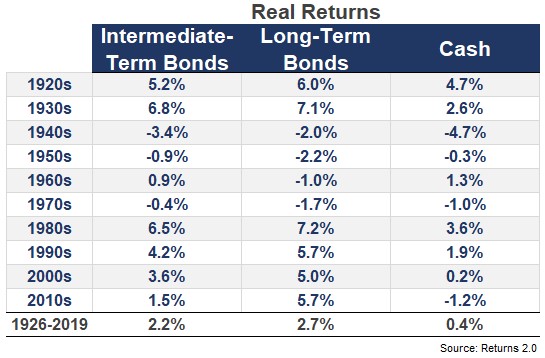 The 1930s returns are actually higher because of the massive deflation from the Great Depression but you can see the 1970s higher nominal rates were completely destroyed by the sky-high inflation of that decade. And returns were negative for nearly every maturity level in the 1940s, 1950s, 1960s, and 1970s.

From 1940-1979, long-term government bonds were down more than 50% after inflation. Just look at the stark contrast between the real returns for bonds over the last 40 years and the 40 years prior to that:

There are three ways to look at this data in thinking through how it pertains to bond returns going forward:

(1) The returns since 1980 are ridiculous. Elevated inflation in the 1970s and early-1980s forced the Fed’s hand so they raised short-term interest rates to 20% or so to crush rapidly rising prices.

It worked but it also left investors with double-digit starting bond yields. Never say never (especially after this year) but it’s hard to see a scenario where rates get that high anytime soon.

Bonds since the early-1980s might be one of the most impressive bull markets of all-time and it’s hard to imagine seeing anything else like this in our lifetime.

Interest rates rose from around 2% in 1940 to more than 10% by 1979. So it wasn’t so much rising rates that hurt bond returns as rising inflation.

(3) Inflation is the wild card. 1980-today is an outlier period for bonds from a combination of high starting yields and a disinflationary environment made for a magical bull market in bonds.

And 1940-1979 is an outlier period for bonds from a combination of sky-high inflation and rapidly rising interest rates.

It all depends on inflation.

If inflation remains subdued, even from low starting yields bonds could end up doing fine, even if/when rates rise.

If inflation gets out of control, that’s when bonds investors should worry.