A few months ago I looked at what would happen if you only invested at market peaks over a long time frame. It turned out the results weren’t as bad as you would think.

Gaspar Fierro, a blogger at the Spanish website Rankia, decided to run the numbers on the opposite end of the spectrum – someone that only invested near the bottom of the market. Specifically he used MSCI data on a number different of stock markets from around the world going back to 1970.

This was a very long time horizon, roughly 44 years, but that’s about how long a baby boomer would have had if they retire in their mid-to-late 60s. Gaspar compared the difference between an investor that simply dollar cost averaged into the market to one that had the skill to be able to buy within 17% of the market bottom (under the assumption that it would be impossible to nail the exact bottom every time).

In between the market lows the hypothetical market timer would have held cash until the next buying opportunity.

Here are his results from some of the larger markets: 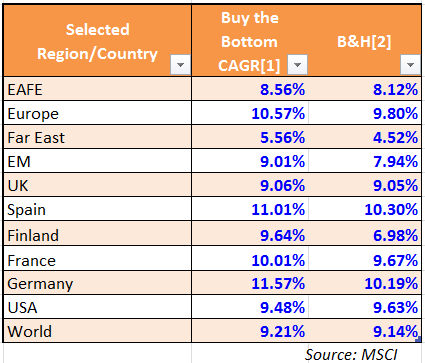 You can see the numbers are all fairly close. Buying near the market bottoms yielded better results in most cases, but it wasn’t huge outperformance from the market timing strategy. Gaspar said he was surprised by these results (I was too):

I want to be honest with you, I did not expect these results. I had always thought that if someone was able to buy near lows continually, then that person would have spectacular returns that would beat almost any investment strategy.

If they work, market timing strategies tend to look better over shorter time frames. These performance numbers show that over longer time horizons just a simple strategy of being in the market can yield great returns. Plus, nailing the market timing calls every sinlge time would be impossible. This was Gaspar’s main takeaway:

The main difference between the two strategies is that the B&H is the easiest and feasible to replicate by any mere mortal, while the market timing strategy is quite difficult and unlikely.

Not many investors have the patience required to put their head down and hold on for dear life over the many ups and downs that come along in the market over multi-decade long holding periods.

But if you have a time horizon that extends beyond a few years, try to remember the power of long-term thinking when you would like to make a short-term tactical move that could potentially backfire on you.