Last week my colleague Michael Batnick pointed out that small cap stocks have seen the equivalent of both a bear and bull market this year alone:

The people that use all-time highs to scare you are the same people who told you that the 27% selloff in the Russell 2000 earlier this year was the canary in the coalmine. Small-cap stocks are now at all-time highs and 40% off their February lows.

It seems like a distant memory now, but the S&P 500 was basically the only stock market that didn’t go into a bear market — as defined by a 20% or greater loss — during the early-2016 selloff.

This episode provides a nice lesson about investing in small cap companies, whose shares are typically seen as riskier than the more mature large cap corporations in the S&P 500. Some combination of the volatile nature of these businesses and the volatile nature of investors who place money with these companies means that small cap stocks tend to see more corrections and bear markets than large caps.

This is something you have to become comfortable with if you wish to stay invested in small caps.

I took a look at the historical drawdowns for the Russell 2000 Small Cap Index going back to its inception in 1979 and compared those losses to the S&P 500 over that same period: 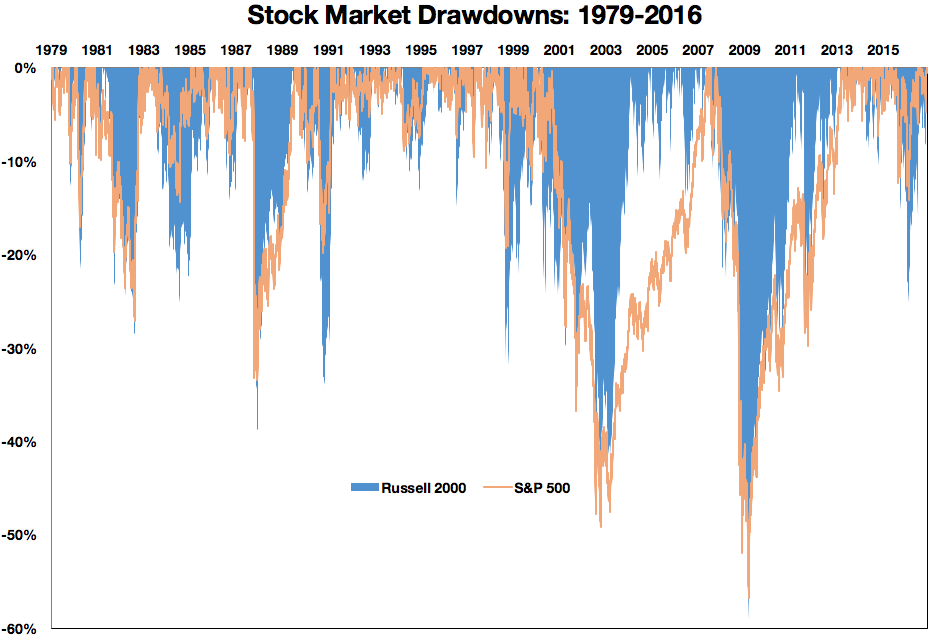 You can see that the Russell 2000 has shown a history of more frequent and deeper losses than the S&P 500. Here are the numbers behind this chart which shows the various Russell 2000 corrections and bear markets since 1979 along with the corresponding S&P 500 losses during those times: 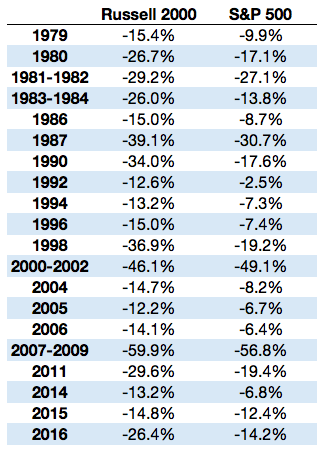 There have been plenty of large losses in small caps that didn’t really seem to affect what was going on with large caps. Going again by the trivial definition I used from above on bear markets (20% loss or worse) the Russell 2000 has experienced ten in this time while the S&P 500 has only seen four (with two or three close calls).

Source:
This is Not Bearish (Irrelevant Investor)

Further Reading:
What If There Is No Small Cap Premium?