Investors need a wide range of abilities to succeed in the markets.

You have to understand basic math, statistics, and probabilities. You need a firm grasp on the relationship between risk and reward to understand the various securities, asset classes, and strategies. You must have an understanding of human nature — when it comes to others and yourself — is a prerequisite if you wish to enjoy longevity in the markets.

You also need to learn about financial market history. Many assume studying market history means trying to figure out how to beat the market going forward but I’m not talking about backtests here.

Financial history is important from the standpoint of learning how the world is constantly changing but the one constant in the markets is that it’s cyclical. And those cycles inevitably contain a vast number of booms and busts.

A reader recently sent me an old pamphlet from the Federal Reserve from 1943 that looks back at the history of booms and busts going all the way back to 1775! It was titled Business Booms and Depressions Since 1775. The chart shows economic expansions & contractions, inflation/deflation, asset prices, commodities prices, national income, wars, and federal debt levels over this time.

I’m not sure how accurate some of the data sources were back then but this is a fascinating look at the pre-WWII cycles in America.

Notice the massive inflation spike from the War of 1812 followed by 13 years of deflation. Brutal.

I’m noticing a pattern here. Following the Civil War, there was a massive inflationary spike followed by yet another 13 year period of deflation. 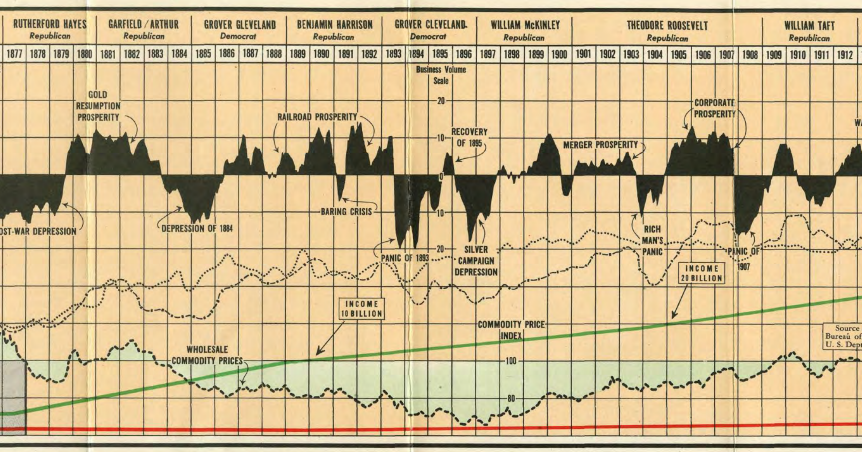 No wars in this time frame but plenty of prosperity followed by a panic or depression. 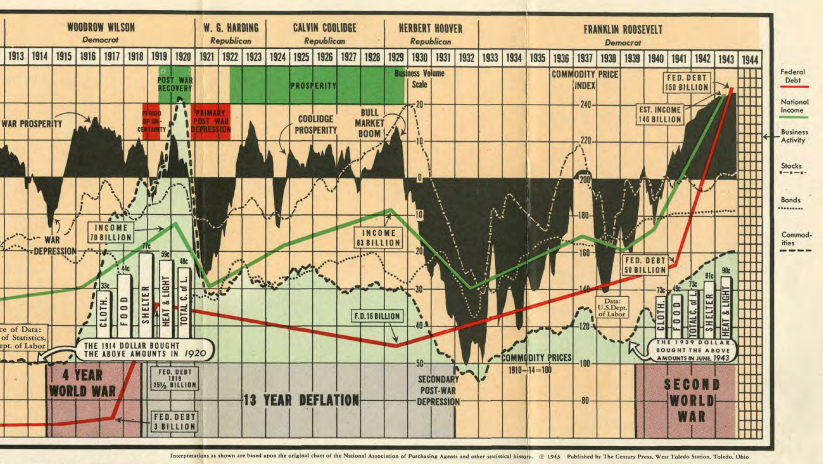 This has to be one of the craziest periods of modern history. You have the Great Depression sandwiched in-between two world wars. I can’t even imagine what it must have been like to live through those times.

And yet another inflationary spike from war followed by 13 years of deflation.

The chart included an accompanying commentary which discussed how history had shaped what was happening in the early-1940s. One of the reasons it’s so difficult to use historical analogies to predict the business cycle is because the variables change over time.

Here the Fed talks about how postwar periods typically played out prior to 1943:

This playbook would have seemingly worked over most of this time but was basically done after WWII. We’ve had wars since then but nothing of the magnitude of the Civil War or either of the world wars. And the inflationary booms and deflationary busts have become much more muted than they were in the past.

Here were their thoughts on the changes to national income over time:

Federal debt levels were also mentioned, mainly because there was so much money borrowed during WWII: 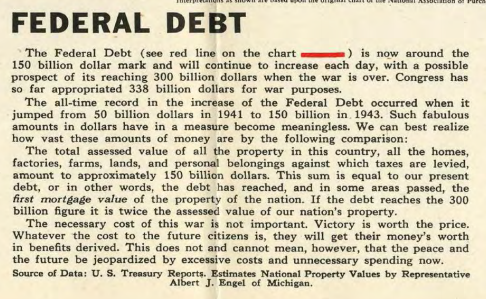 How about $22 trillion today:

I often wonder if the country’s debt load is just something every generation has to worry about no matter what.

Finally there was a short blurb on business activity with just a few short words on the stock and bond markets: 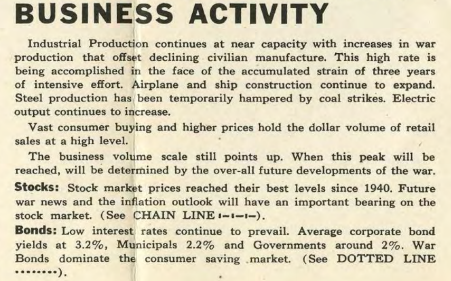 Following the Great Depression, most people more or less gave up on the stock market so it’s no surprise stocks didn’t get much pub here.

Some people are under the impression things are getting worse over time but do yourself a favor and look at some of the events, both economic and otherwise, depicted on these charts. The world has always been sort of a messed up place.

But here are the constants: booms, busts, and things slowly but surely getting better over time.

The Market is Rolling Simply Because It’s Rolling