“This market is rolling simply because it’s rolling.”

I love learning about market history but often times you’re reading a historical account which was pieced together many years after the fact. I like reading what people were thinking and feeling at the time to get a sense of how investors handled their business in the moment of maximum optimism or pessimism.

A few weeks ago I wrote about the original flash crash which occurred in 1962.

So I was excited when a 1962 copy of Life Magazine appeared in my mailbox yesterday afternoon, sent to me by a very kind reader of this blog (check out the price on the bottom righthand corner): 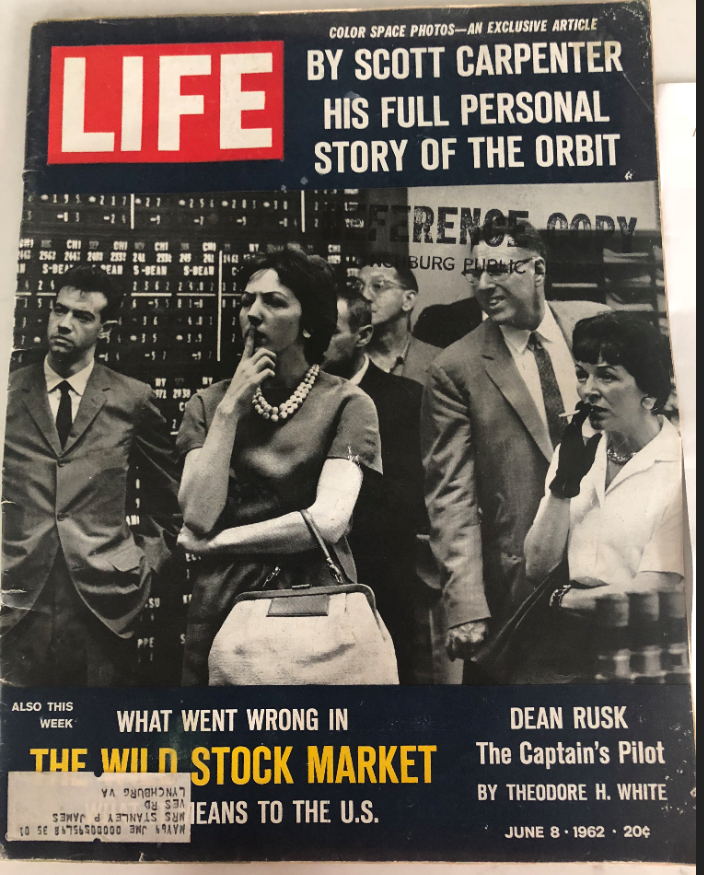 The flash crash was the cover story. I read through the entire piece and wanted to share some of my findings.

I love the reason given for the plunge in May of 1962: The markets came down because it had gone too high.

That same passage could have been written earlier this year when stocks came charging out of the gate in January only to fall precipitously in February.

I also love this quote from Gerald Loeb:

Investor psychology is one of the most important — and most unpredictable — factors of all. The investor always gets too optimistic and puts prices too high, or gets too pessimistic and sets them too low.

The cycle of fear and greed is undefeated in the markets.

If you replaced some of the geopolitical events in the following passage with current events, this one could have been written in the present to describe the past few years: It’s also interesting to note that much of the run-up that preceded the flash crash was from a new generation of investors since many of those who lived through the Great Depression had simply given up on the stock market: 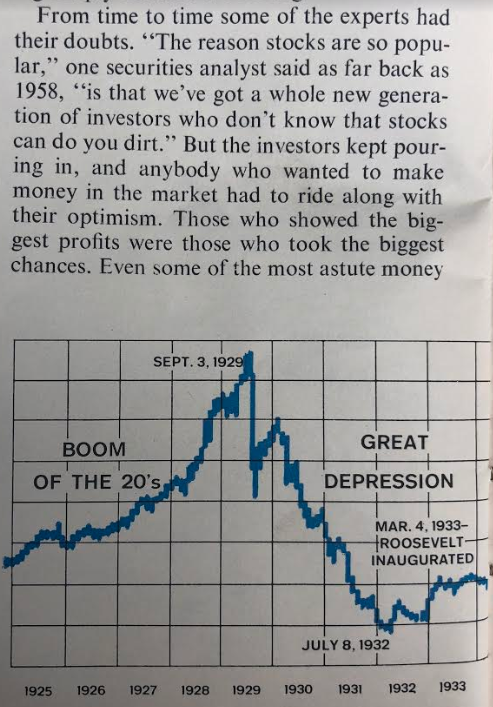 Another lesson I learned early is that there is nothing new in Wall Street. There can’t be because speculation is as old as the hills. Whatever happens in the stock market today has happened before and will happen again.

I’m a big believer in the idea that no two market environments are ever exactly the same in terms of how they play out. But I also believe that human nature is the one constant that will never go away in the markets.

It’s actually kind of refreshing to know that investors in the 1960s were dealing with many of the same fears and uncertainty we’re all forced to deal with today.

Here are some more pictures from this piece along with some short commentary from me: 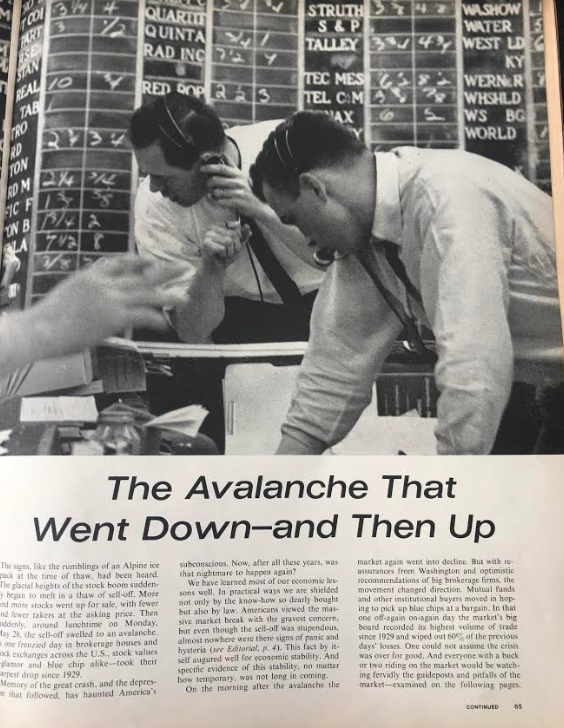 The stock prices at the brokerage shown here were written on a chalkboard. I can’t begin to understand how shoddy market operations were before things became computerized. Also, I can’t tell if this is two brokers or mission control at NASA. No market plunge is complete without pictures of brokers running around the trading floor looking panicked and yelling. The pained expressions on individual investors is another constant in the financial media. 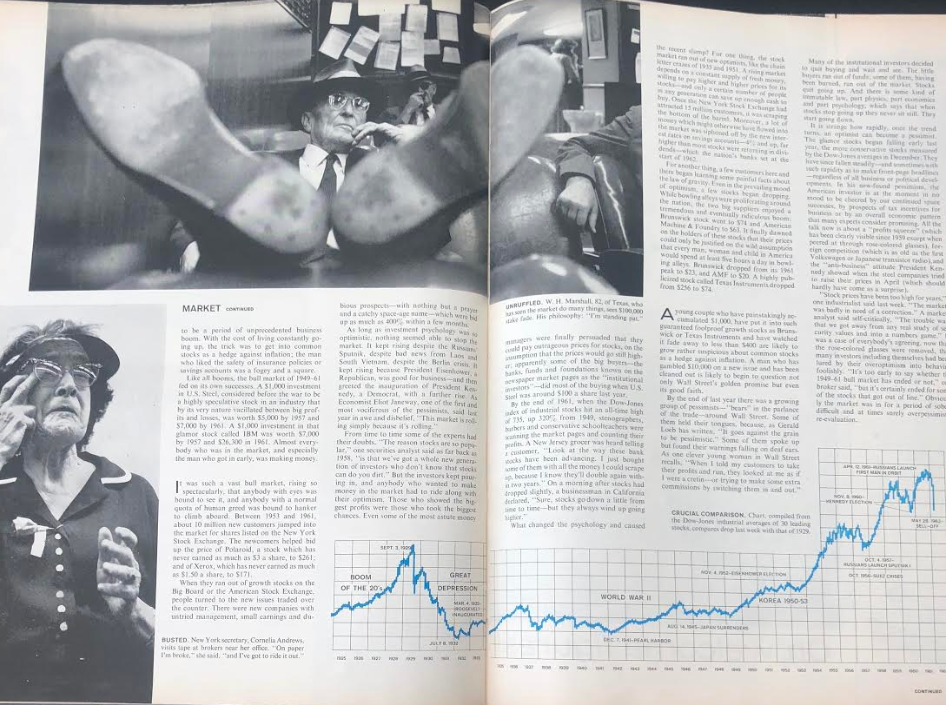 The ads in this magazine were also somewhat interesting from a time capsule perspective: 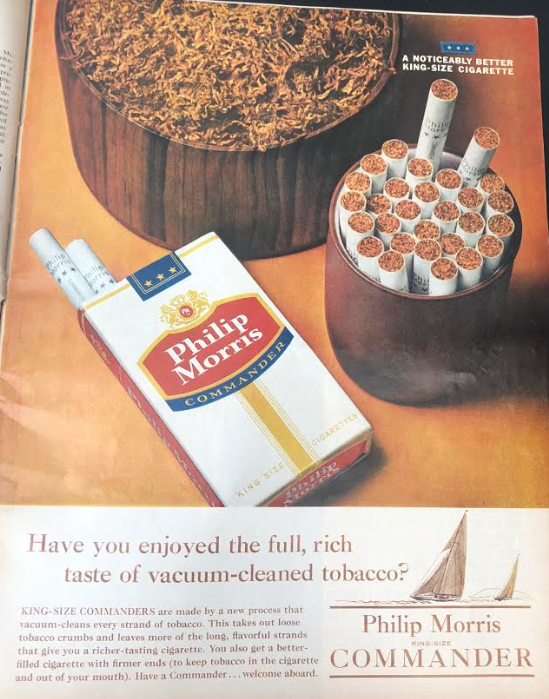 I can’t remember the last time I saw a cigarette ad. This has to be the minivan of the day in the 60s. I definitely would’ve had one of these at the time to haul my 3 kids around. 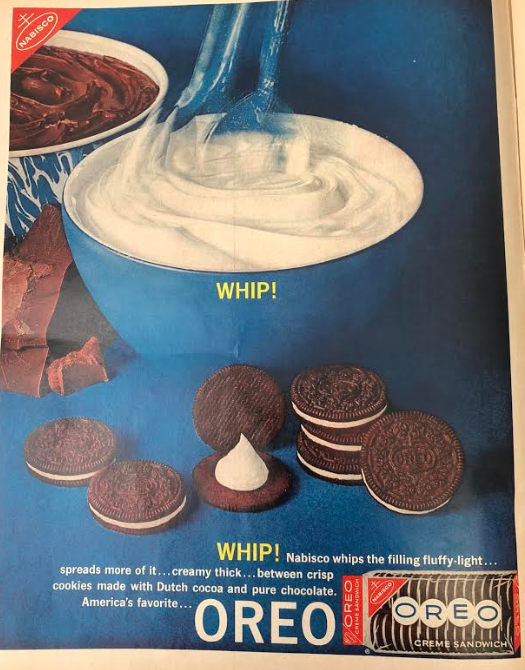 This Oreo ad looks like something Don Draper came up with. Simple and to the point. 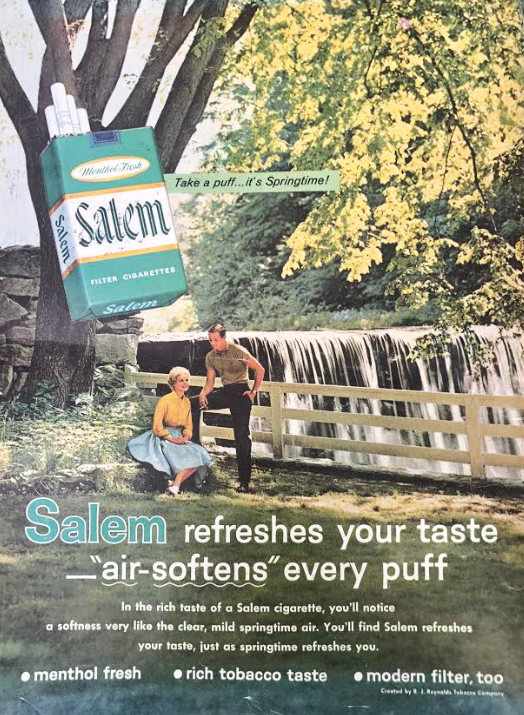 Another cigarette ad, this one with a waterfall in the background that would probably be used for life insurance or a prescription drug if it ran today. 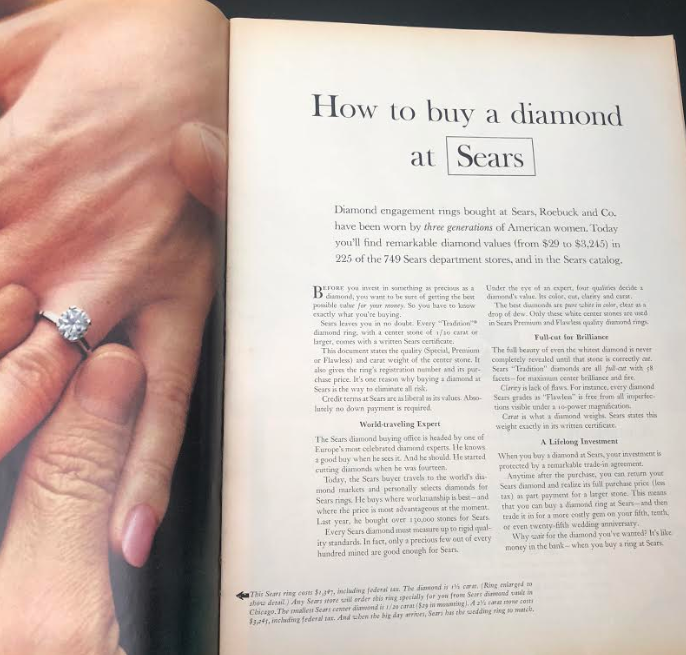 Looks like Sears made it easy on people buying diamonds back in the day. This was the original sponsored blog post.

Further Reading:
The Original Flash Crash (Or Why Liquidity Fears Are Nothing New)