Captain Obvious here: It hasn’t been a great quarter for the stock market.

There have been more than 370 quarterly returns since 1926. If the quarter were to end today, this would be the 14th worst in that time frame. The list of the other big down three month periods don’t exactly elicit confidence: 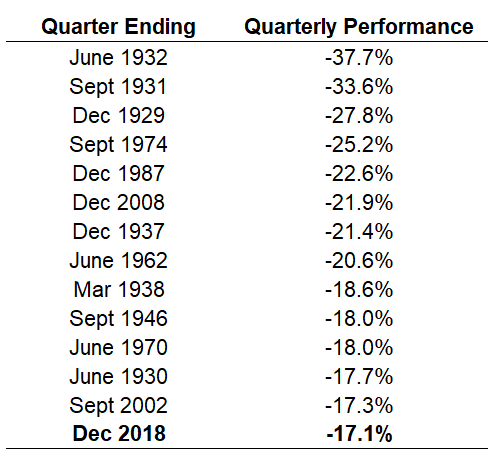 Just under half of the worst S&P 500 quarters occurred in the 1930s, only the worst economic and stock market environment in modern history.

Losses of this magnitude in such a short period of time can become paralyzing when trying to think about what happens next. The past is always easier than the present because we know what happened in the past but have no idea what’s going to happen in the future.

Even if it doesn’t offer a perfect roadmap for what’s to happen next, I do think the past can provide a range of potential outcomes, even though the future always creates its own path.

There’s nothing we can do now but let’s see what happened going forward from the previous terrible quarters in the market. Here are the same periods with one, three and five-year performance figures from the end of these horrific quarters: 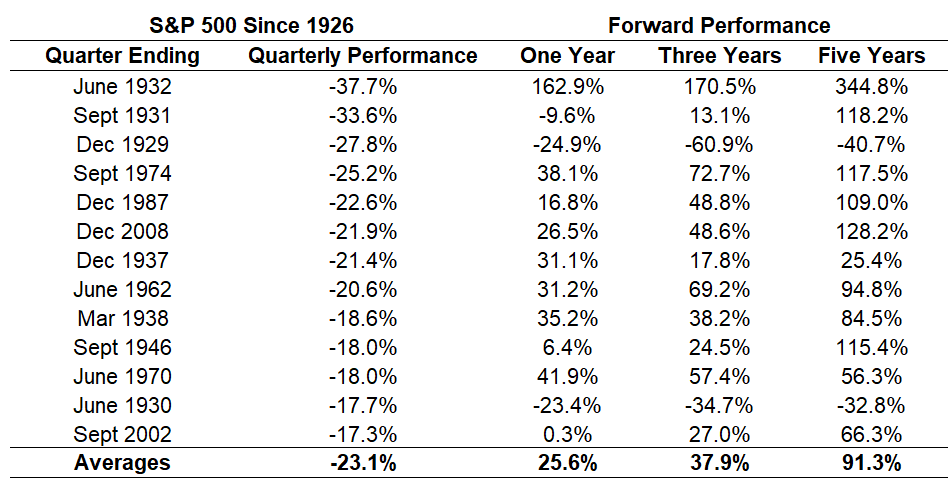 You can see the ensuing 12-month, 36-month, and 60-month performance was positive the majority of the time, with nice looking average gains.

Just for the fun of it, let’s take a look at this data ex-1930s, under the assumption we don’t go into another depression:

Small-cap stocks have been hit even harder than their large-cap brethren. The Russell 2000 is down almost 24%. If this were to hold over the next week or so, this would be the 4th worst quarter…ever.

Here’s a list of the other 10 worst Russell 2000 quarters since its inception in 1979 along with the current iteration: 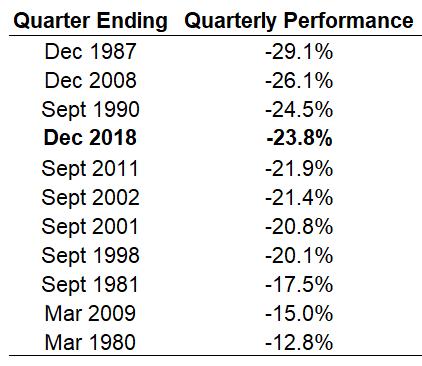 Again, not the greatest market environments we’ve ever seen.

Now here are the forward returns on the Russell 2000 following the terrible quarters of the past:

There was just one down period looking out 12 months and every 36 and 60-month time frame showed gains.

I don’t know what happens from here.

But I do know that human nature makes it difficult for people to handle the types of losses we’ve experienced over the past few months. It invites overreactions and increased volatility of emotions.

It’s always possible these losses are an outlier…or they’re a sign of things to come and things only get worse from here.

“Using history as a guide…” requires a disclaimer because no two market environments are ever exactly the same. Memories shape how market participants think, react, and feel about the markets. So there’s no way of telling what will happen next even when we use scenario analysis to guide our actions.

What I do know is the history of stock market performance shows that the longer you extend your time horizon, the higher the probability you have of seeing gains. This relationship seems to hold following a big down quarter in stocks, as well.

I’m not positive this will happen again because nothing is ever guaranteed but expected returns have likely risen from where they were just 3 months ago.