Earlier this week I wrote a short history (because there really is no long history) of corrections and bear markets in emerging market stocks. Here’s the graph for those of you who missed it: 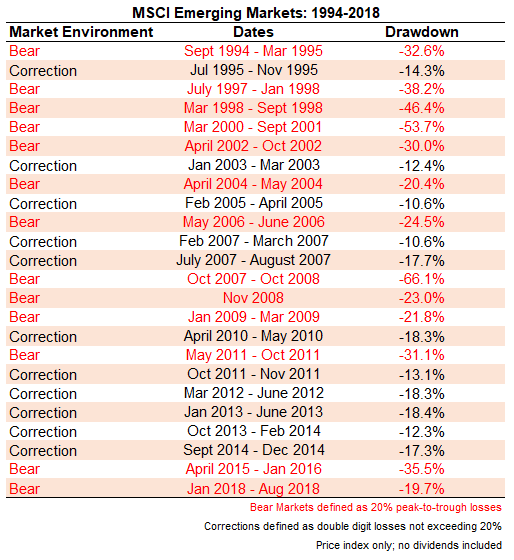 The natural follow-up, which is a question many of my astute readers posed, is what happened to the performance of EM stocks after the carnage.

So I went back to see how emerging markets performed following prior bear markets, which have occurred at a frequency of once every other year, on average, since 1994.

I looked at two different scenarios.

First, I wanted to see how emerging markets performed going out one, three, and five years after falling 20%. Since the timing on these things is never perfect, I assumed you would buy on the first day of the month1 following a drawdown of 20%: 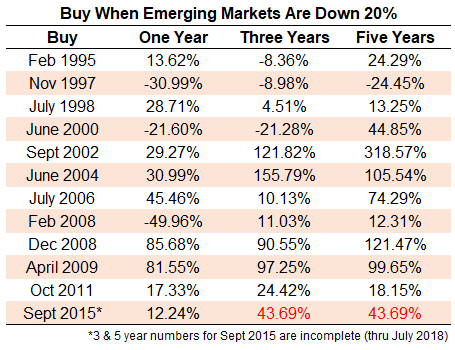 The average bear market over this time has been a drawdown of roughly 35% so the 20% threshold doesn’t exactly act as a line in the sand. So let’s also take a look at what would have happened if  you would have bought following a 30% decline in EM using the same parameters2: 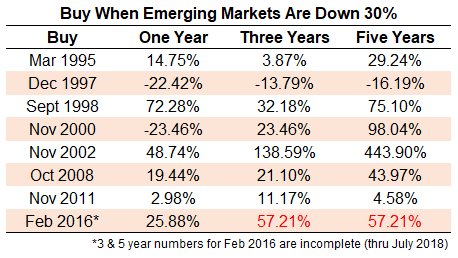 The 1997 bear market is the obvious outlier that didn’t pay off because there were bear markets in 1998, 2001, and 2002 that dinged the end results. But the rest of the performance numbers show there can be large payoffs when you avoid being fearful when others are fearful.

The hard part about investing in volatile asset classes is they can drive you nuts with their inconsistency.

The good part about investing in volatile asset classes is they offer plenty of buying opportunities.

Unfortunately, the buying opportunities are never easy because every time stocks fall, it’s comforting to tell yourself they’ll fall even further.

I’ll just buy when the dust settles and things calm down a little bit.

With emerging markets, things are rarely calm. I don’t know if this current ~20% swoon will make for a good buying opportunity or not. Anyone who tells you with certainty how things will work out with any investment is either lying or delusional. We just don’t know.

But there are worse strategies in the world than buying or rebalancing into the pain. And emerging markets have been painful for a while.

2Buy on the first of the month following a break below the 30% threshold.