If I was in the fortune cookie advice-giving game this post would list things like learning, reading, maybe even my marriage as some of the best investments I’ve ever made. If I really wanted to blow your mind I would say investing in myself.

But I’m not here to give motivational advice you can find elsewhere.

I’m talking about actual investments in the markets.

I suppose it’s possible I’ll hit the jackpot someday but I’m not banking on it. I just don’t have the personality or risk appetite to bet it all on the chance for life-changing gains. I’ve always been more of a slow-and-steady-wins-the-race kind of guy.

I thought about this idea of best investments when I was doing some research last week on the amazing gains we’ve seen in the stock market from the bottom of the Corona Crash.

Looking at the returns from the bottoms of previous bear markets led me to check the performance of the S&P 500 from the bottom of the Great Financial Crisis in March of 2009: 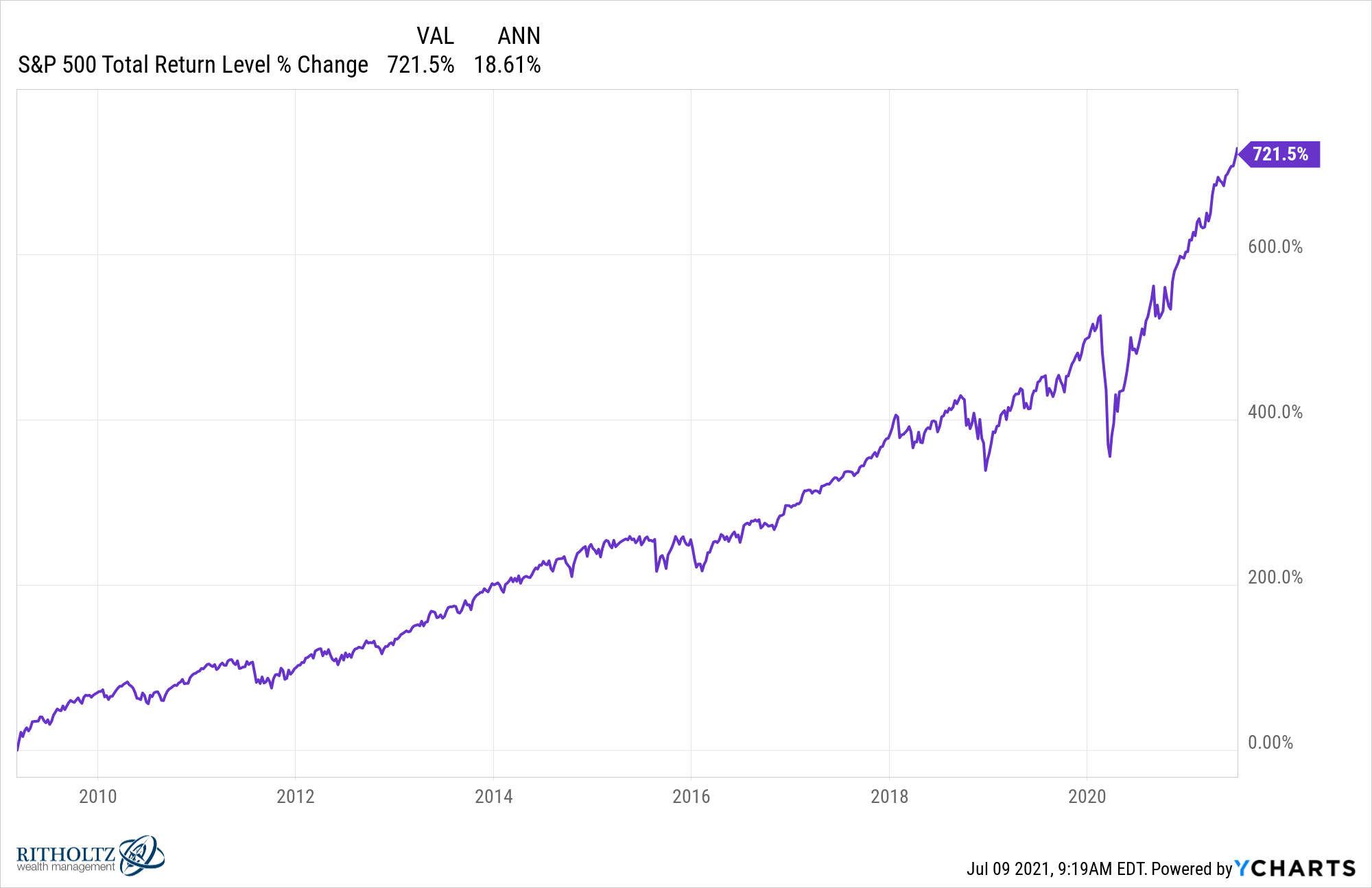 That’s good enough for annual returns of roughly 19% per year for 12 years running.1

Those returns would have turned $10k into more than $82k.

This got me thinking that my simple dollar cost averaging strategy into a total stock market index fund throughout 2008 and early-2009 will likely turn out to be some of the best investments I’ll ever make.

I know this sounds boring but so be it.

And it’s not like you have to go all-in from the exact bottom to see extraordinary gains when investing during the crisis.

You could have had what seemed like bad timing and still made out all right.

Lehman Brothers declared bankruptcy on September 15, 2008. Had you invested the Friday before Dick Fuld’s subprime house of cards went under, you would have experienced a 45% drawdown before stocks bottomed in March of the following spring.

Yet your returns from that day would still be undeniably strong: 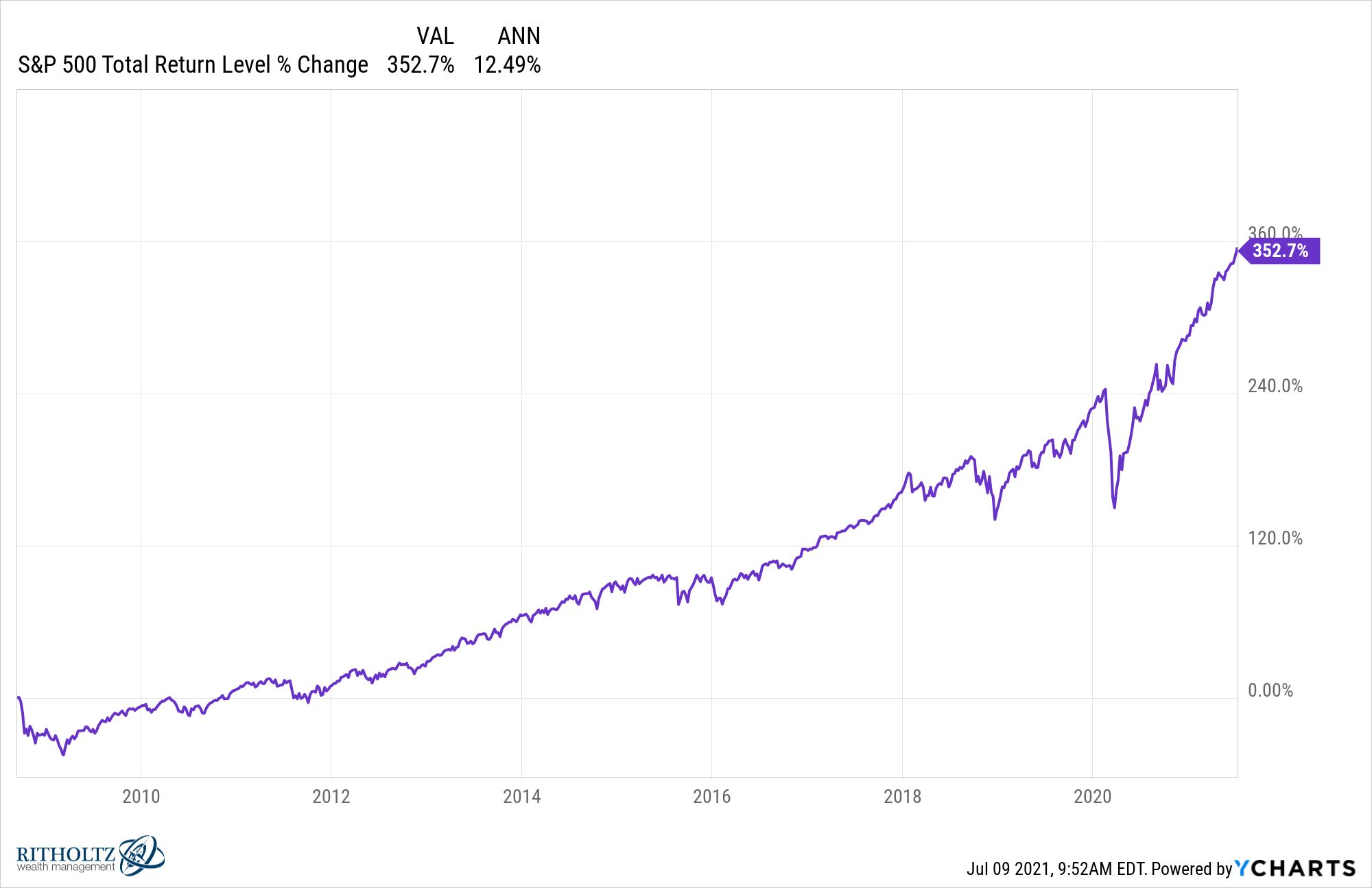 Or what if you put your money in when JP Morgan bailed out Bear Stearns in March of 2008 under the false assumption the financial crisis was coming to an end? 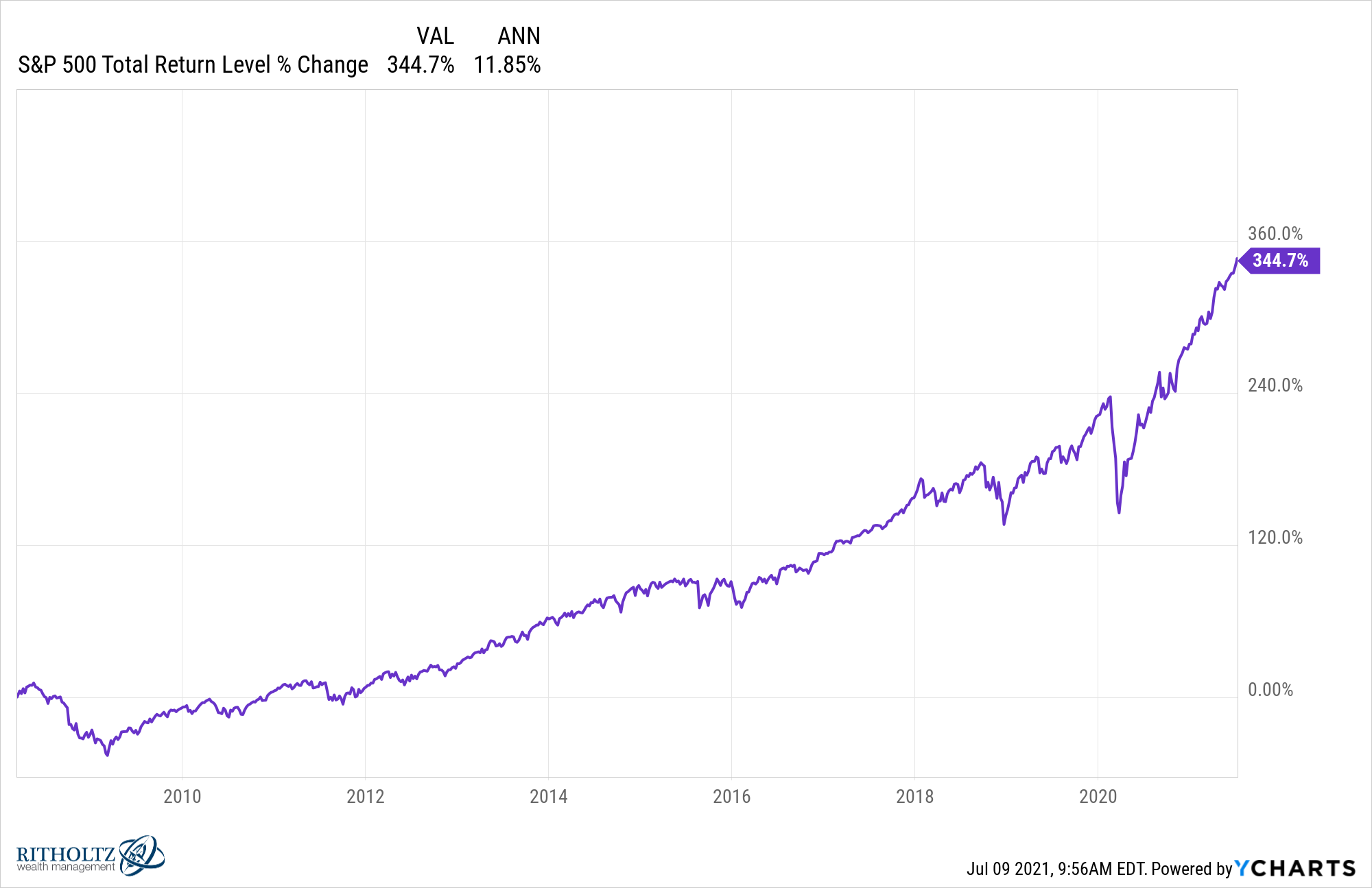 Had you invested right before that correction hit, you would still be up more than 14% per year: 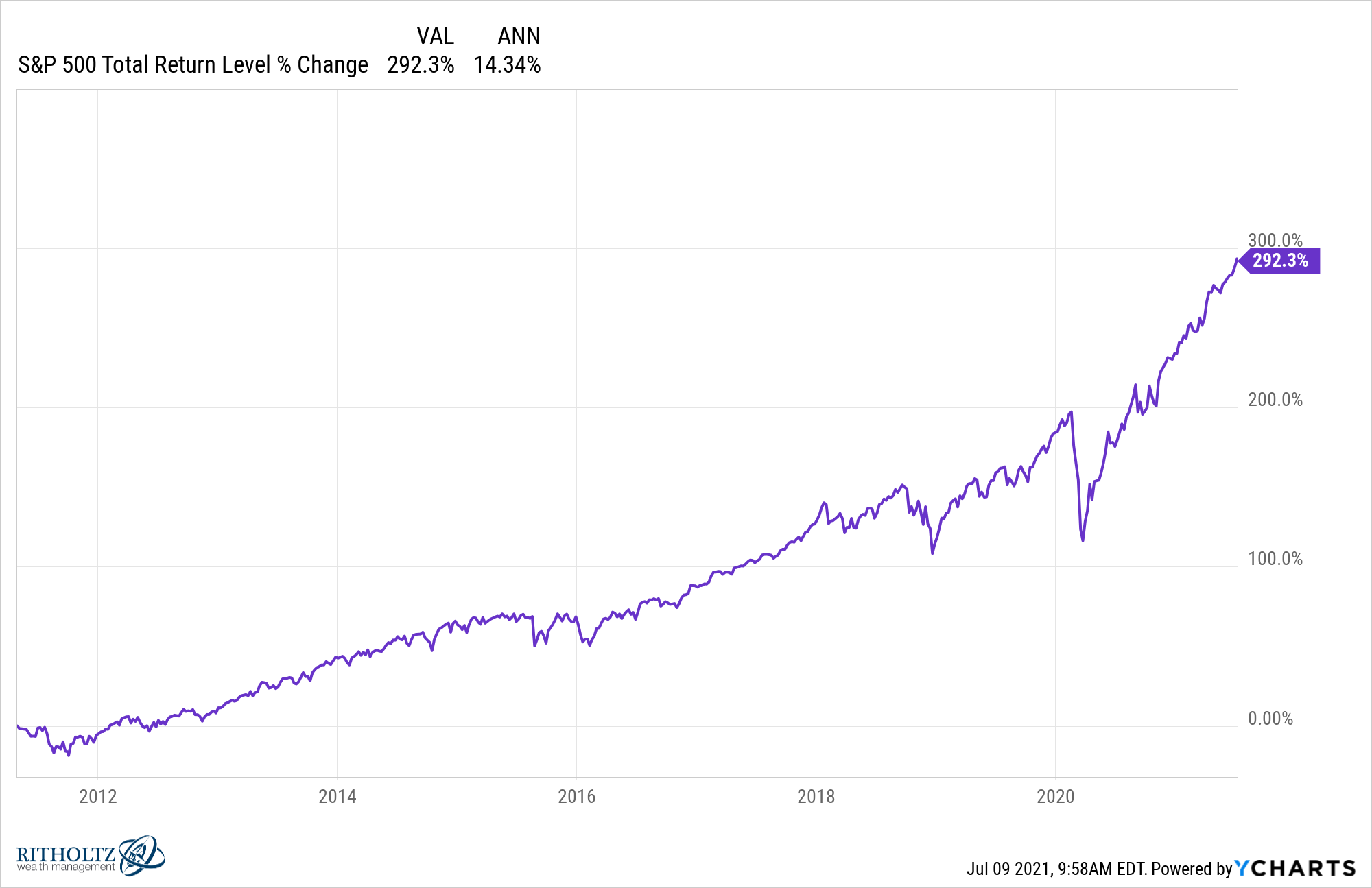 Obviously, it helps these types of comparisons when your end date (now) is sitting at all-time highs.

But what if we were to look from bottom to bottom? 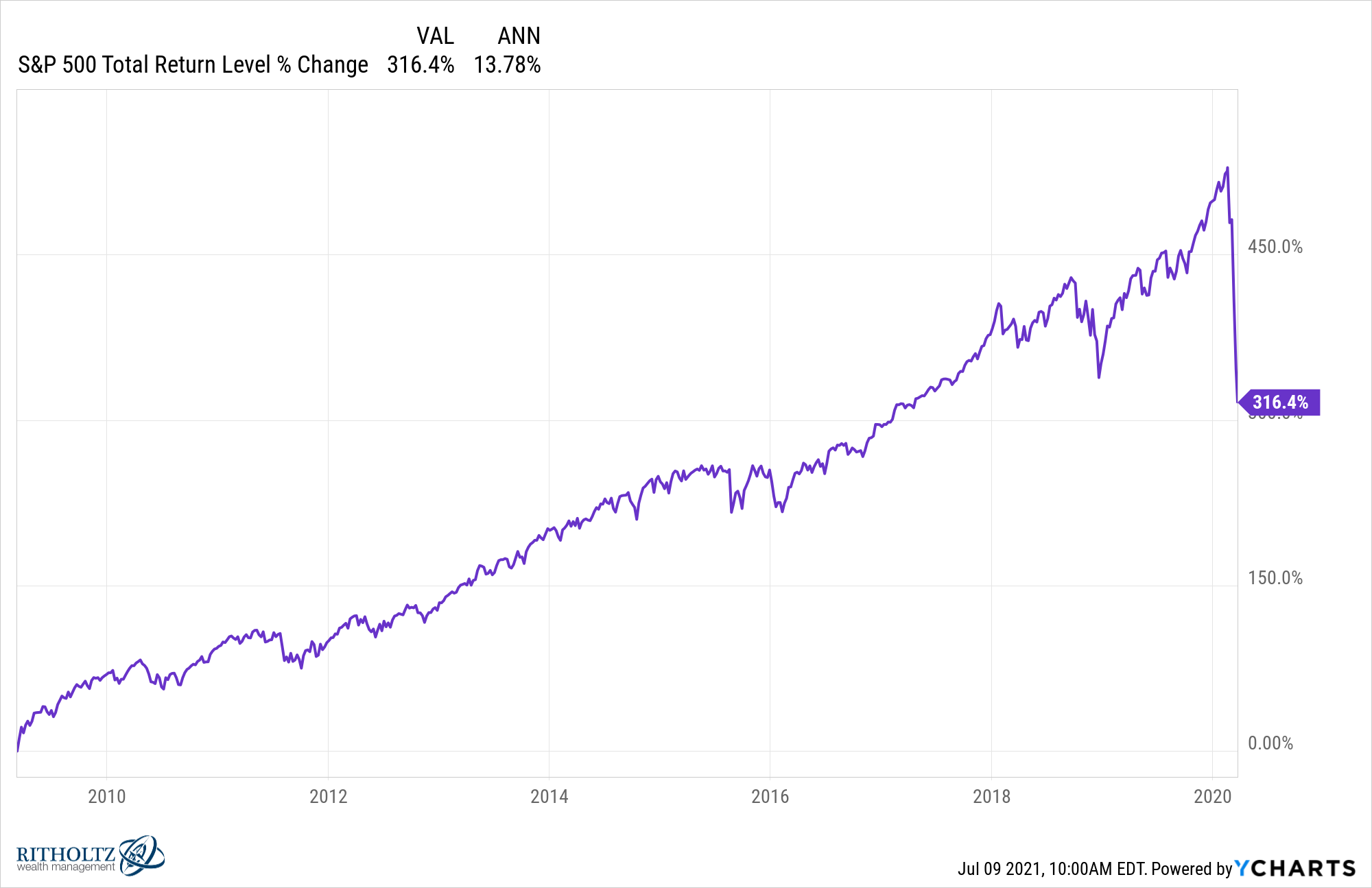 Even after a 34% crash as your stopping point that’s still pretty good.

Or how about investing right before Lehman went under and holding on through the bottom of the pandemic plunge: 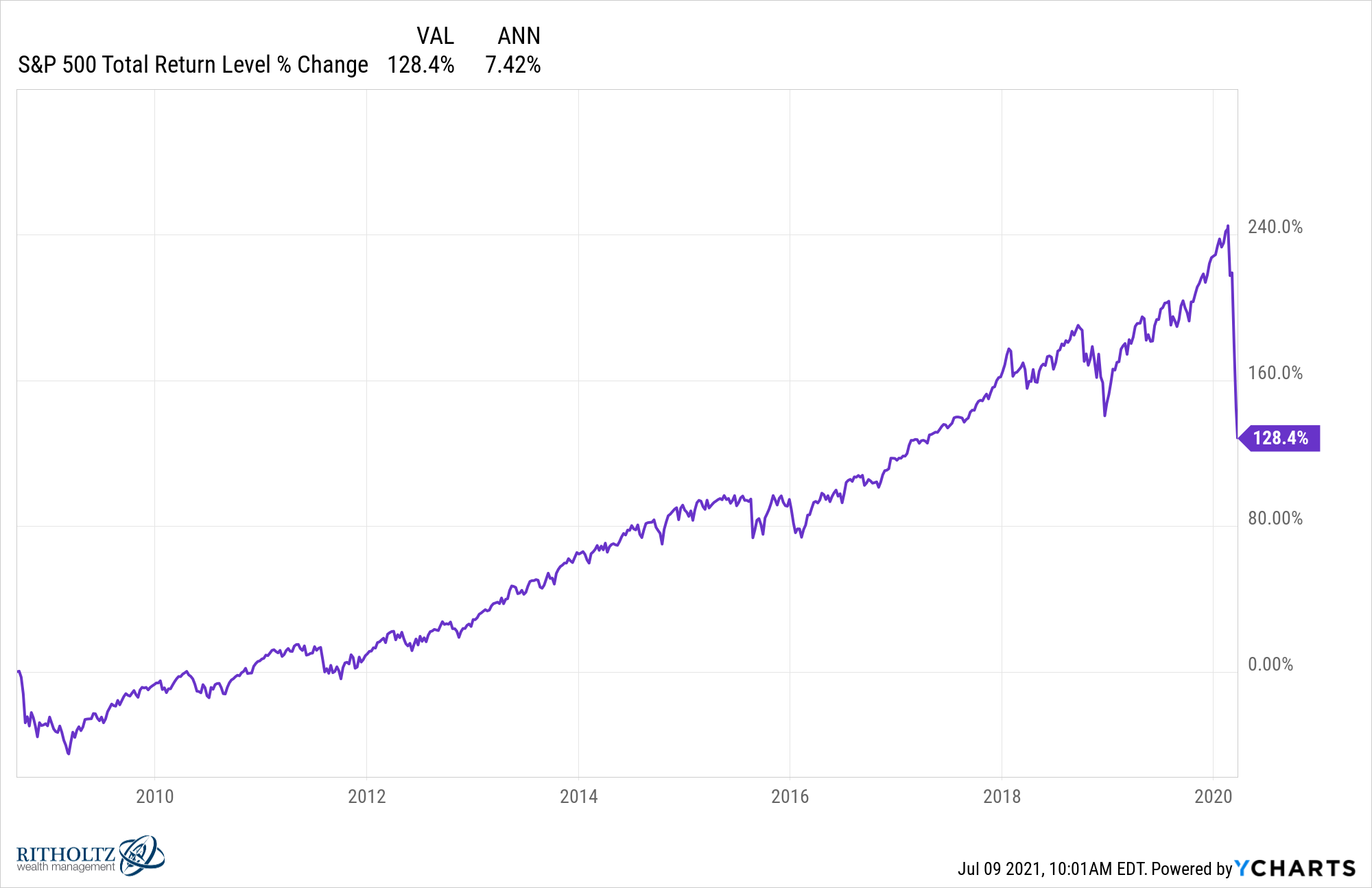 Not great but still not bad considering the starting and ending points and the many large corrections along the way.

I like to remind people the best way to win any argument about market performance is to simply change your start and end dates. So take these numbers with a grain of salt as timing can have a large impact.

But it’s important to note that the longer you extend your time horizon when dealing with the stock market, the less those start and end dates tend to matter.

This is also a good reminder for young investors about the benefits of downturns for your savings.

Putting your money to work at all-time highs feels more comfortable but the real money is made by putting your savings into the market when stocks are in a free fall.

If you’re a net saver in the years ahead, you should be hoping for a market crash for better buying opportunities.

That’s where the real compounding comes from.

Michael and I discussed investing during the 2008 crash and more on this week’s Animal Spirits video:

Subscribe to The Compound for more videos from us.

1The Nasdaq 100 Index is up more like 24% per year in this time. I’m sure you could find plenty of other investments that are up even more but that’s always the case.