The Wall Street Journal had a headline that got a bunch of finance people in a tizzy yesterday: 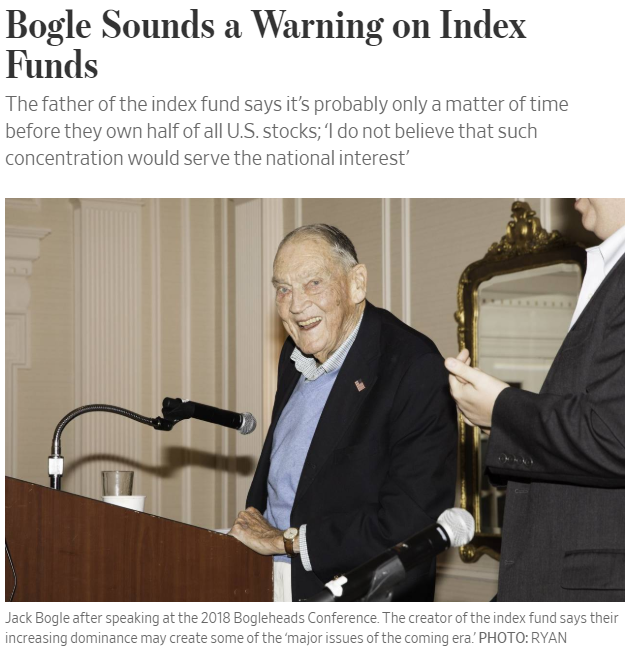 What?! The father of index funds is worried about…index funds?!

People need to settle down and read the actual article.

But before I get to this story let’s look at a cool graph about Amazon Prime you can use to impress your family and friends over the holidays: 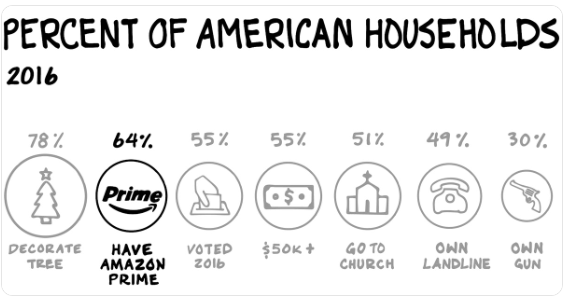 This chart from Scott Galloway’s book The Four: The Hidden DNA of Amazon, Apple, Facebook, and Google shows the dominant position Amazon has carved out for itself in the retail commerce game.1

Amazon’s insane stock market run is well documented at this point and there’s no way to tell how aligned the market’s expectations are with future growth prospects and what that means for the stock price going forward. But it would be hard to argue that Amazon isn’t one of the most dominant companies in the world right now.

The question is: what could knock Amazon from their perch at the top?

They could have a strategic misstep. They could hire the wrong people or drop the ball on customer service or Bezos could decide to take one of his rocketships to Mars. But barring something out of left field, it would seem to me the biggest threat to Amazon’s business model is regulation from the government.

Galloway wrote the following in his book discussing Bezo’s idea that we need a universal basic income in this country:

The inside of an Amazon warehouse is upsetting, even disturbing. Unsafe working conditions? Nope. Abuse of employees as per the New York Times article? No. What’s disturbing is the absence of abuse, or more specifically, the absence of people. The reason Jeff Bezos is advocating a guaranteed income for Americans is he has seen the future of work, and, at least in his vision, it doesn’t involve jobs for human beings. At least not enough of them to sustain the current workforce. Increasingly, robots will perform the functions of human employees, almost as well (and sometimes a lot better), without annoying requests to leave early to pick up their kids from karate.

If Amazon is the cause or even the scapegoat, for millions of Americans losing their jobs2 that could certainly bring about some scrutiny from politicians, especially the ones who have voters losing those jobs.

But it’s also hard to argue for regulation against Amazon because they are making things cheaper and more convenient for shoppers. I love Amazon. My garage has 78 empty Amazon boxes in it right now awaiting my trusty box cutter to be broken down. I couldn’t imagine life without Prime’s free shipping.

So how do you regulate a company that is making life better for the American consumer?

This brings us back to Bogle’s story in the Journal. If you read his piece beyond the headline, he’s not worried about index funds in the way most people are, in that they’re somehow causing a bubble or moving the markets (they’re not). He’s more worried about the market share of the fund firms that are selling the index funds:

If historical trends continue, a handful of giant institutional investors will one day hold voting control of virtually every large U.S. corporation. Public policy cannot ignore this growing dominance, and consider its impact on the financial markets, corporate governance, and regulation. These will be major issues in the coming era.

These firms are collectively now the Amazons of the fund world. They’re making things more convenient and cheaper for the investment consumer. It wouldn’t shock me if index funds in the future come with rewards points much like credit cards to get people to use their products. That’s how much scale these firms have built up. Index funds will all be free within the next decade or so (#timestamp).

So there’s almost no way any new entrants can come in and compete with these firms because they wouldn’t have the scale.3

What Bogle is worried about is these companies gaining a larger and larger share of the equity markets through their index fund ownership to the point where they basically control corporate governance voting. You could certainly make the case that a handful of firms shouldn’t be deciding these things.

On the other hand, don’t you want long-term owners of corporations to have a seat at the table when holding corporate management responsible for their actions? And aren’t index funds the ultimate long-term holders of stocks?

I get what Bogle is saying but in many ways, the good that these firms have done so far would seem to far outweigh any potential damage they could cause through proxy voting. I would be much more worried if a large group of actively managed funds was gaining this kind of market share because many of those funds don’t hold their companies for the long-term as index funds do.

I could be proven wrong but this seems to be a case of much ado about nothing.

1This chart reminds me — this is the first year in my life my household will be using a fake tree and it was not easy to come to this decision. But it had to be done because my 18-month-old son would have had a field day tearing apart a real tree and probably would have tried to drink the tree water. It pains me to say it but the fake tree was so much easier. We also had to put the ornaments only on the top half of the tree so my twins can’t reach them. Looks great, not a lot of sap.

2There are as many cashiers in this country as school teachers.