The unemployment rate has fallen off a cliff since reaching double digits in October of 2010. It now sits at just 3.9%.

To put this in perspective, from 1970-1999, the unemployment rate never fell below 4%. Job openings in America now outstrip the total number of people actively seeking employment.

Economic textbooks would tell us when demand exceeds supply that prices (wages) should rise. And although the pace isn’t quite as high as some would like to see, this is happening:

Year-over-year wage growth bottomed in late-2012 and has been on a steady climb ever since. However, looking at the bigger picture, these numbers are still fairly subdued:

The logical follow-up question for investors is this: What impact does wage growth have on the stock market?

Economists still have a hard time wrapping their heads around the general causes of inflation but the theory is that if wage growth is too high we risk seeing sky-high inflation. Sky-high inflation is generally not a good thing for the financial markets.1

Yes, higher wages give people the ability to spend more money but inflation also means higher input costs from both raw materials and wages paid to employees. Corporations often have a difficult time passing along all of those higher costs to customers, which in turn hurts profits and margins.

To see how wage growth has impacted stocks historically, I found both the mean and median year-over-year percentage changes using Federal Reserve wage data. Since 1965, these numbers were 4.2% and 3.7% respectively.2 Then I looked at the ensuing one year and three year returns when the YOY wage growth was below and above the average and median:

Although the exact timing of these things is never easy and it’s tough to say you can use this data as any sort of market signal. The following table looks are every correction and bear market in the S&P 500 going back to 1965 along with the corresponding wage growth going into the start of the sell-off: 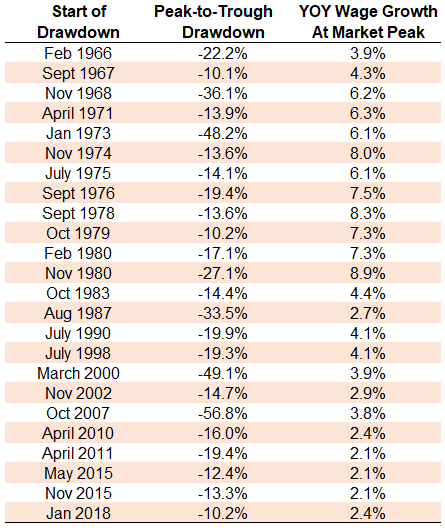 The stock market can fall when wage growth is high…or it can fall when wage growth is low. It’s important to remember that the economic backdrop definitely plays a role in what happens in the stock market, but you can’t discount the risk appetite of investors. Markets can move in sync with the economy at times, but they can also detach from economic reality when expectations are out of whack.

So the fact that wage growth is rising is something to pay attention to but it’s probably more helpful to use when setting expectations, not timing the market.

Regardless of the market implications, it would be nice to see wages continue to rise. Financial markets have been outpacing income growth for the majority of the country for a long time now. Capital has been taking advantage of labor for decades.

Hopefully, as people see higher wages they can be used to save and invest more money when markets fall.

Further Reading:
Inflation is a Bigger Threat to Stocks Than Rising Rates

1The huge wage growth you can see in the 1970s was a killer for the stock market as real returns went nowhere for a long time.

2The reason I included the median is that the averages could be skewed by the higher wage growth (and inflation) of the 1970s.