“The facts of the present won’t sit still for a portrait. They are constantly vibrating, full of clutter and confusion.” – William Macneile Dixon

When I was growing up dinosaurs were described as slow, cold-blooded, reptilian, and not very colorful.

New research has determined that many dinosaurs were in fact fast and could have been covered in feathers, with the colors of a peacock. It’s also possible that they were warm-blooded based on their growth rates.

Anyone taking biology classes in the 1930s, 40s or 50s would have learned about the 48 chromosomes there are in the human cell. As it turns out, research in 1956 proved the number is actually 46 chromosomes.

Samuel Arbesman discusses the idea of changes in the knowledge base in his excellent book The Half-Life of Facts: Why Everything We Know Has an Expiration Date:

Knowledge is like radioactivity. If you look at a single atom of uranium, whether it’s going to decay — breaking down and unleashing its energy — is highly unpredictable. It might decay in the next second, or you might have to sit and stare at it for thousands, or perhaps even millions, of years before it breaks apart.

Knowledge has a half-life but it also has a shelf life.

Researcher Rong Tang looked at books in different fields to see how long they lasted before being replaced or updated: 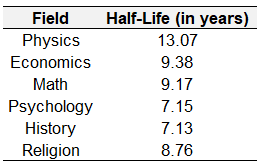 This same idea extends to the markets as well. Ideas, strategies, rules, and philosophies which were once considered iron law can become overcrowded and get arbitraged away. And once knowledge becomes widely disseminated, markets and investors adapt, which can change performance going forward.

My favorite recent example of this comes from the world of high-frequency trading. Profits in these oft-criticized strategies fell below $1 billion in 2017, down from $7.2 billion in 2009.

When Yale’s endowment head David Swensen released his book Pioneering Portfolio Management: An Unconventional Approach to Institutional Investment in the year 2000, his ideas were both pioneering and unconventional. That’s not the case anymore as the majority of large nonprofits have adopted Swensen’s approach to asset allocation:

The average college endowment with more than $1 billion now has close to 60% in alternatives. Performance for these funds has left much to be desired as replicating Yale’s success has been no easy task. The low hanging fruit in alternatives is gone.

The relationship between dividend yields and bond yields is one that used to be considered “fact” in the investing world. Until the 1950s, when bonds yielded more than stocks it was a clear signal that it was time to get out of the stock market. As my colleague Michael Batnick showed here, this idea worked — in both 1907 and 1929 — until it didn’t: 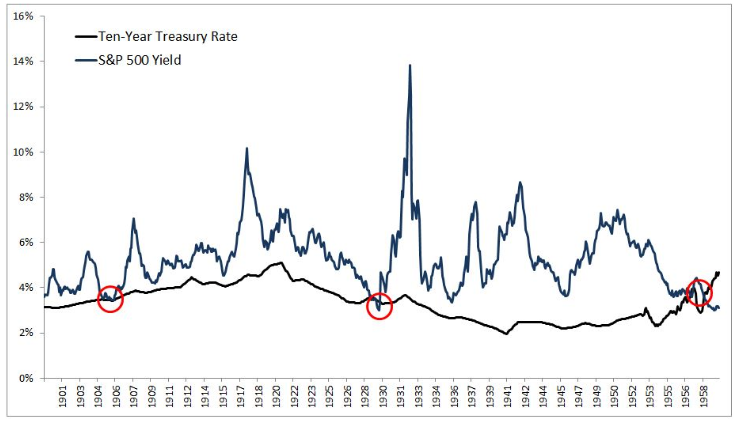 After the dividend yield fell below the bond yield in 1957, stocks went on to gain 200% over the ensuing 10 year period. This signal was proven to be a faulty way of looking at the world, even though it worked in the past.

Jake from EconomPic showed how the value premium has been impacted since Fama and French released their seminal paper on the topic in the early-1990s: 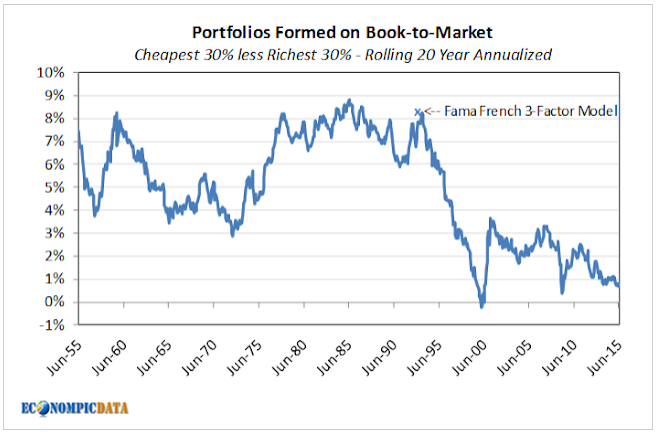 The value factor has still “worked” but the premiums have been severely depressed since the idea became more widely known.

Commodities futures were considered to be the Holy Grail of investments — stock-like returns with little correlation to the stock market. This idea gained mainstream acceptance in the mid-2000s but few people realized that before 1990 or so, it was basically impossible for investors or fund managers to actually invest in commodities futures.

The rush of investors to the space has seen these instruments go from offering investors a premium to basically charging them to hold futures as the roll return disappeared. Commodity performance numbers have been abysmal ever since.

Trend-following using managed futures has seen similar results after copycats entered the market. Winton’s David Harding, a pioneer in this type of strategy recently stated, “People always say to me: ‘This is what works.’ I say: ‘Worked’.

A story on Harding said the following:

Trend following might have worked “fantastically well” for more than three decades, but the wane of the strategy underscores Winton’s view that “there are no immutable laws in finance”, he says.

“There are no immutable laws in finance” is a good lesson for people who assume they have the markets completely figured out. A few more lessons:

Prepare to be wrong. Chuck Klosterman once wrote, “We have no idea what we don’t know, or what we’ll eventually learn, or what might be true despite our perpetual inability to comprehend what that truth is.” This is difficult for our brains to comprehend because it’s hard to change your beliefs or hold two conflicting ideas in your head at the same time. Regardless of the subject matter, you should build into your process the fact that your current stance on a topic will possibly be proven wrong in the future.

Stay curious. The other day I wrote about how astounding it is that you can buy a good book for $9.99 or so but a good birthday card costs $5.99. A good book is an amazing deal when you consider the fact that you’re getting years and years of research, ideas, and knowledge from potentially hundreds of different sources. One way to avoid a stale knowledge base is to continuously take advantage of this wonderful deal.

Humility should be your default setting. The smartest people on earth can crash and burn in spectacular fashion in the markets. Investing can be a humbling exercise if you don’t enter them with a heavy dose of self-awareness and humility. The markets are one of the few places in life where confidence can work against you.

Further Reading:
What Happens When the Umbrella Shop Gets Too Crowded?