CNBC had a piece this week that looked at how top heavy returns in the stock market have been this year. They showed 3 stocks — Amazon, Netflix and Microsoft — alone make up more than 70% of the gains in the S&P 500 and Nasdaq 100 indexes: 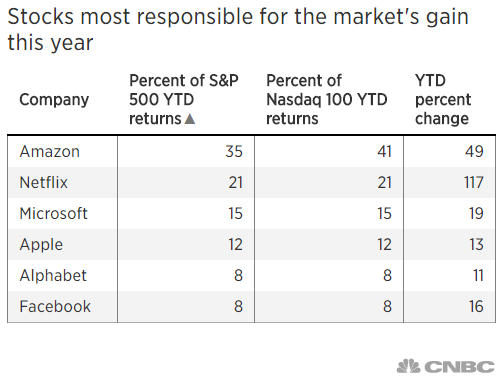 When you include Apple, Google (I refuse to call this company Alphabet), and Facebook those numbers jump to an absurdly high 98% and 105%, respectively.

The obvious takeaway here would seem to be that 2018 market returns (around 5% for the S&P and 14% for the Nasdaq 100) are all being driven by a handful of names. And if that handful of stocks ever come back down to earth, which they’ve been wont to do on occasion, watch out below.

The simplest explanation for these staggering numbers is the fact that this is how market capitalization weighted indexes work. By definition, the largest stocks will have a bigger impact on the returns than the smaller stocks.

Many of the names in that list of the 40 smallest stocks by market cap have had good returns this year:

But those stocks aren’t going to move the needle as much as Amazon or Microsoft or Apple because they don’t carry the same weights as the large tech stocks.

It would also be more concerning that the gains were so concentrated at the top if the S&P 500 was the only thing going up this year. Spoiler alert — it’s not.

If there were only a few stocks rising you would see a large divergence between these lines. Instead, we see the advance-decline fairly inline with the stock market. This tells us that there are far more stocks rising than just a few of the biggest names.

It may feel odd to see performance being driven by so few stocks but this is how the stock market generally works over time. The majority of returns come from a handful of names. It’s like this over both short and long time frames.

Data from Hendrik Bessembinder showed that from 1926 to 2015:

This doesn’t mean other stocks didn’t do well over this period, just that the most wealth was created in the stocks that grew to be the biggest (which seems sort of obvious when you think about it).

It can also be instructive to look at how some of the other biggest names are performing this year: 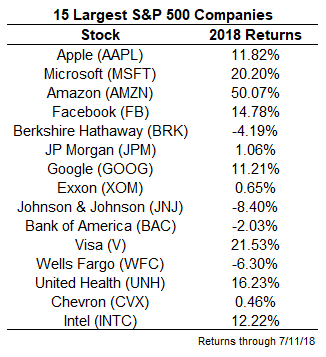 Yes, tech stocks are the big winners. No, this won’t last forever. But it’s also true that financial or energy stocks at the top of the market won’t be laggards forever either. It’s quite possible that they can offset some of the relative losses when we do finally see a mean reversion in technology.

Here are a few takeaways to wrap things up on this topic: