The Fed has now raised interest rates 6 times in the past 3 years. Savers, it appears, aren’t being punished nearly as much as they were in the past. But holders of long-term bonds could be punished if those rates ever decide to join the party.

Going back to 1977, the average spread between the 2-year and 30-year yields has been just over 1.2%, so spreads are much tighter than they’ve been historically. And the 2-30 spread has come down substantially since it blew out to 4% in 2011. The current yield gap between long and short-term bonds doesn’t offer much protection to investors in long-duration bonds.

Bond duration is simply an approximate measure of a bond’s price sensitivity to changes in interest rates. A good rule of thumb is you can expect a bond to rise or fall by the duration value for every 1% move in interest rates (and recall that bonds and rates are inversely related).

So a bond with a duration of 5 years would expect to see gains or losses of 5 percent in price for every 1% move up or down in rates (this isn’t a precise measure because the convexity of bonds mean they typically rise a little more than they fall but this is close enough and no one really cares about nerdy bond market math).

The yield and duration figures for the various treasury bond ETFs shows how close the yields are among the bond maturities yet how different the durations are:

Long-term bonds have much higher durations than short-term bonds because the interest rate picture over a 20-to-30-year period is so much more uncertain. A lot can happen over a few decades so investors must be willing to accept more risk.

The following chart show how duration could impact different bond securities based on a 1% move higher in interest rates across the board: 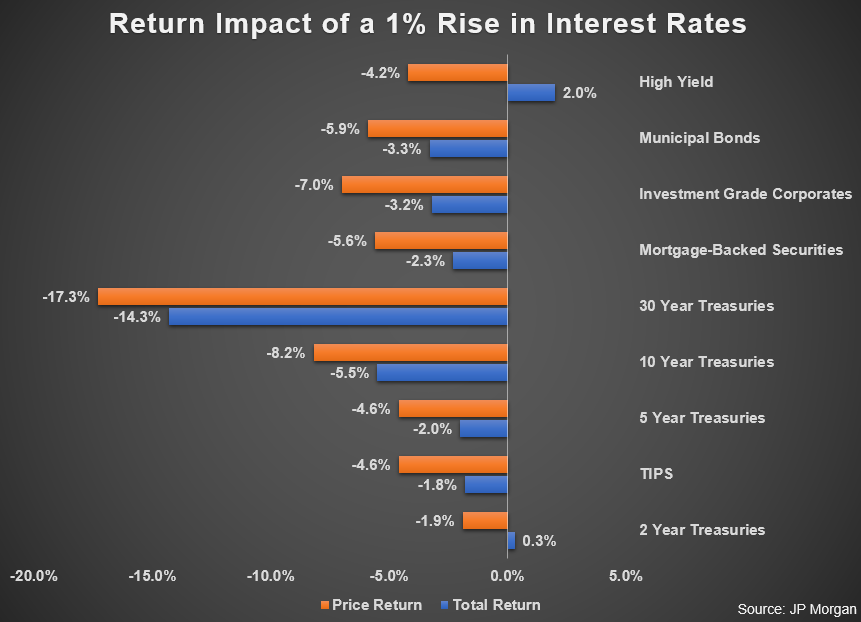 You can see the losses get larger the further out you go on the maturity spectrum in treasuries. When 2-year treasuries were yielding 20-30 basis points following the financial crisis, investors were being paid to take duration risk in longer-term bonds. This is not the case anymore.

Junk bonds do offer more of a buffer in terms of yield but those bonds introduce default risk. Corporate bonds and mortgage-backed securities offer a similar duration picture to the 5-year or 10-year but those types of bonds have their own unique risks as well (credit and prepayment risk come to mind).

Obviously these things work in the other direction if rates were to fall but this gives you a sense of the types of risks involved based on the different yield and maturity levels.

Another risk investors need to be aware of is the fact that duration can change over time depending on the composition of the fixed income securities or fund in question. Duration has been relatively stable for the treasury bond ETFs throughout this cycle because their sector composition is static.

I looked at the data from iShares and the 4 treasury ETFs referenced in the table above have seen fairly similar duration levels for the past 10 years or so. But that’s not the case for the aggregate bond market.

The Bloomberg Barclays U.S. Aggregate Bond Index is used by professional and retail investors alike as both a benchmark and investment proxy for bond index funds. Most total bond mutual funds or ETFs closely track the Agg as their underlying index.

Duration risk has been rising for several years now in the Agg and most investors are probably unaware of it. The following chart from JP Morgan shows how duration and yield have changed on this bond index since 1990: 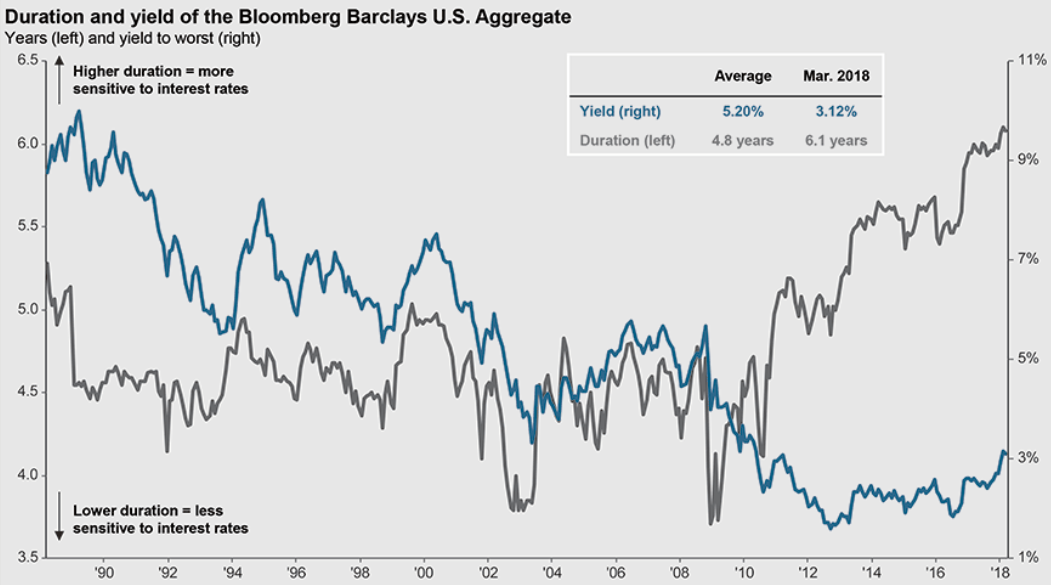 You can see the sensitivity to interest rates has been rising since 2009 and is now higher than it has been at any time since 1990. Part of the reason duration on the U.S. bond market has been rising is because rates are much lower than they’ve been historically. Volatility is higher for bonds at lower interest rates, all else equal.

But the sector composition of the bond market has also changed over the years. The aggregate bond market is made up of many different fixed income sectors — treasuries, mortgage-backed securities, government agency debt, asset-backed securities, commercial MBS, etc. — and these sectors change based on the supply of bonds in the fixed income market.

The massive issuance of treasuries has taken the weighting of those bonds in the index from 21% in 2007 to roughly 38% in 2018. A higher weighting in treasuries has led to not only lower yields but also higher duration risk.

Bond investors have had it relatively easy over the past 40 years or so. There has been little volatility to speak of along with falling rates from much higher levels. It’s been more or less a one decision asset class (own it or don’t own it). Investors haven’t had to worry much about their bond allocation.

Whether or not the bond bull market is over remains to be seen but investors should expect to see higher volatility in this space going forward. The fact that short-term rates are finally offering competition to the long end of the maturity spectrum also gives investors something to think about.

Bond investors are going to have to be more thoughtful of their allocation to this once boring space.