Before the early-1900s almost no one in America brushed their teeth.

It wasn’t until advertising executive Claude Hopkins came along to pitch Pepsodent that this all changed. Hopkins had previously sold people on the idea of Schlitz beer, Palmolive soap, and Goodyear tires. Now he had a friend who wanted him to help get people to use minty paste to brush their teeth.

Because people began eating more sugary, processed foods, the state of dental hygiene had become so poor by World War I that the government considered it a national security risk since so many recruits had rotten teeth.

Hopkins initially passed on the project because so few people brushed their teeth but relented after receiving equity in the venture (incentives are a powerful drug). While perusing boring dental books he discovered a type of plaque on your teeth that feels like a thin film. He decided to create an ad campaign around the idea of removing that film. 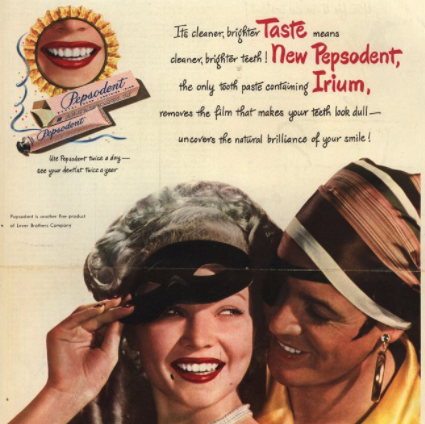 His ad campaign was wildly successful because it made people self-conscious about their appearance and offered a simple solution.

The toothpaste itself doesn’t do anything to help remove this film (you can do it with your finger or simply use a toothbrush with no toothpaste) but people bought into this idea because it offered positive reinforcement for a new habit.

Charle Duhigg recounts in his book, The Power of Habit, some of the lessons learned by Hopkins:

Before Pepsodent appeared, only 7 percent of Americans had a tube of toothpaste in their medicine cabinets. A decade after Hopkins’s ad campaign went nationwide, that number had jumped to 65 percent. By the end of World War II, the military downgraded concerns about recruits teeth because so many soldiers were brushing every day.

“I made for myself a million dollars on Pepsodent,” Hopkins wrote a few years after the product appeared on shelves. The key, he said, was that he had “learned the right human psychology.”

It’s amazing how a simple shift in the narrative can have such a powerful impact on people’s behavior.

The advertising industry figured out the importance of human behavior long before behavioral economics took hold in the finance industry. It took me a long time to understand this concept but much of the wealth management industry really is a sales profession.

There was a slide floating around social media a couple years ago from start-up investor Bill Gurley that explains this nicely: 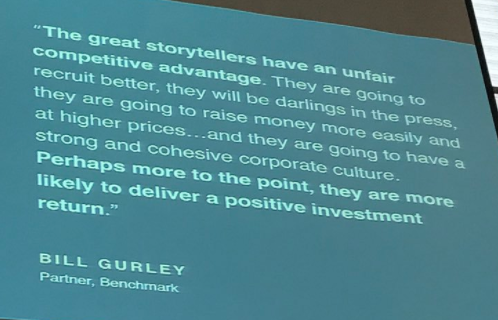 Gurley invests in the venture capital space where storytelling plays an enormous role because the companies they’re investing in are often immature. The LPs in a VC fund are completely blind to the potential companies that will fill the portfolio so the VCs are truly selling a narrative when fundraising.

The financial services industry is full of narratives that are sold to clients — past performance, educational background, investment process, differentiation from competitors, expertise, expected returns, etc.

Of course, it was much easier to rely exclusively on narratives in the past when we didn’t have handheld supercomputers in our pockets containing the sum of the world’s knowledge. Now we can call people out who don’t back up their narrative or sales pitch with actual results.

Investor Josh Wolfe talked about this idea in a recent discussion with Patrick O’Shaughnessy:

We’ve had incredible executor, operators, people that get stuff done, that come up with a plan, they’re executing it, but they cannot go out and raise money, they can’t recruit, they can’t sell a story, they can’t talk to the media, and that is a major deficit. On the other hand, you have people who are amazing at telling stories, and they can lower the cost of capital because they can raise expectations, but they can’t execute. You need a marriage of both. You need the storyteller, and you need the executor and the operator.

I love Wolfe’s idea about how amazing storytellers can lower the cost of capital because they can raise expectations. There are many investment firms that have talked their way into earning astronomical fees from their investors simply because they know how to make a sale.

This is why I like to say that a great sales or marketing staff will almost always trump a great investment staff in terms of raising capital from investors. People prefer a good narrative or story to data or analytics.

I’ve found that good communication skills can make your life easier if it allows you to make someone else’s life easier. And spinning good narratives isn’t just about making the sale. One of the best things you can do for your clients is to help them understand what it is you’re doing for them and why.

But, as Wolfe points out, you also need executors who can actually do the job as promised.

Many practitioners in the investment industry never get a chance to execute their vision on their clients’ behalf because they can’t explain that vision in a way the client can actually understand it.

There are three important attributes required to be successful in the investment industry: (1) you need the analytical chops; (2) you need to understand human psychology; and (3) you need to be able to explain what you’re doing and why to colleagues and clients alike.

The first two are important but the last one is the secret sauce.

Sources:
The Power of Habit
This is Who You Are Up Against w/Josh Wolfe (Investor Field Guide)