Over the long-term currency fluctuations between the various countries tend to balance out. But in the short-to-intermediate-term currencies can fluctuate all over the place and see large relative gains or losses. As investing becomes more global it’s important for investors to understand how currency fluctuations can affect the financial markets in different ways. The following piece I wrote for Bloomberg explains.

The Trump administration is clearly concerned about the perceived strength of the dollar, and whether it has the potential to restrain U.S. economic growth. As with most questions about the economy, this one is complex and requires a lot of context. “It depends” isn’t a very satisfying answer, but it’s true in most cases when discussing something with as many moving parts as the U.S. economy.

For example, the dollar as measured by the Federal Reserve’s broad trade-weighted index fell in the second half of the 1980s and soared in the 1990s, but both decades saw robust growth. It weakened sharply in the 2000s and has rebounded so far in the 2010s, and both decades experienced below-average growth.

When you own shares from other countries around the globe, the diversification benefits come mainly from your currency exposure. Investments made in the U.S. are denominated in dollars, but unless you are hedging out the currency risk, owning international stocks means you are also subject to fluctuations in local currencies when converting back into dollars.

Let’s take a look at an example to see how this has played out over the past 20-plus years. Here you can see a graph of the trade-weighted U.S. dollar index since the mid-1990s: 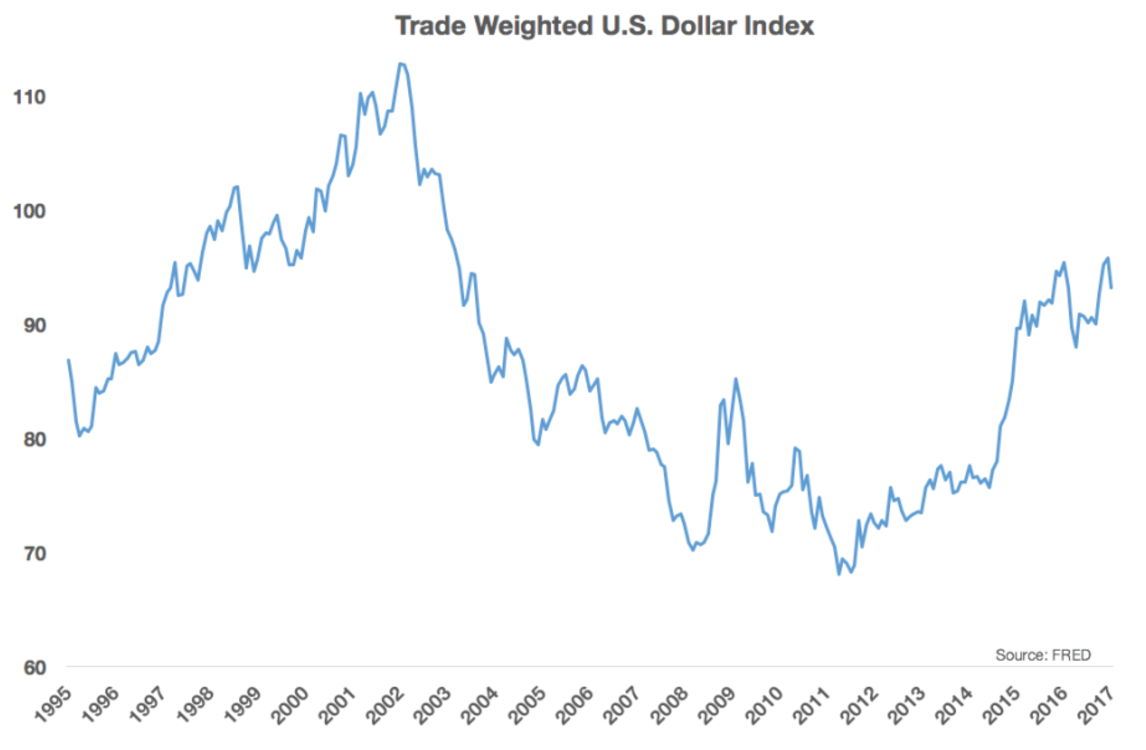 The dollar rose from the mid-1990s through the early 2000s. It then reversed course and gave back those gains and then some before bottoming out in the aftermath of the financial crisis. It has been rising ever since. The impact on stock markets around the globe during these dollar regimes is stark:

A strong dollar propelled U.S. stocks to huge absolute and relative outperformance starting in the mid-1990s and once again starting during the financial crisis. When the dollar fell during the mid-2000s, we saw this relationship reverse. The most heavily affected countries have been the emerging markets, which makes sense considering how strongly their economies and currencies are to movements in the dollar.

A stronger dollar tends to lead to weaker sales overseas and a weaker dollar tends to lead to stronger sales overseas. So when the dollar is weak you can expect international stocks to outperform U.S. equities. That’s because foreign currencies will be appreciating, meaning your investments in those countries will get more bang for the buck in terms of earnings and dividends. The opposite is true with a strengthening dollar. A large percentage of S&P 500 revenue comes from overseas these days so it’s true that fluctuating currencies could also impact multinational corporate results.

Investors also have to remember that while currencies can fluctuate wildly from country to country in the short- to intermediate-term, these differences tend to cancel each other out over the long-term. Since 1995, the Dollar Index has basically gone nowhere, up just 4 percent over this time. This means that investing in international stocks can provide greater diversification benefits to a portfolio for investors who are willing to be patient.

Valuations are much higher in the U.S. right now than in most foreign stock markets. Investors looking for a catalyst for international stock market outperformance over the U.S. should look no further than the dollar. Coupled with cheaper valuations, if the greenback does begin to move lower or even simply stop its upward trajectory, we could see substantial outperformance of foreign stocks in U.S. investor portfolios.