In my old job I spent a lot of time monitoring our stable of money managers. This meant having a deep understanding of their investment process, tracking performance, combing through their portfolios and understanding their risk exposures.

Whenever we would have our quarterly meetings with these managers we would invariably discuss their top holdings. During these conversations, the managers would always talk about the potential catalysts that could send their top holdings higher while we were always more interested in hearing the other side of the story — the potential risks involved.

If I still had this job today, I’m guessing many of the 1st quarter-end meetings with the equity money managers would be focused on Facebook.

The company’s market cap was briefly more than half a trillion dollars, mostly because over 2 billion people around the globe use Facebook on a daily basis (I’m still not one of them for some reason).

Holding or adding Facebook stock over the past few years has been fairly easy because the numbers have been so impressive. CNBC recently showed the Goldman Sachs top hedge fund holdings based on 13-F disclosures and Facebook was one of the most popular stocks on the list: 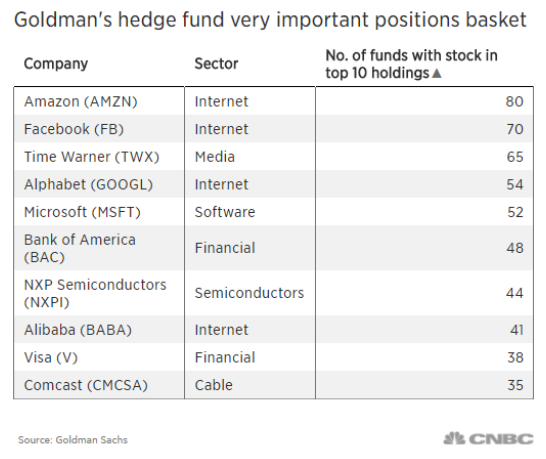 Now these money managers are forced to deal with headline risk in the form of the Cambridge Analytica scandal, in which the firm used private data from over 50 million Facebook users. Right or wrong, Facebook is likely going to be blamed for every big election outcome going forward. They make for a perfect political scapegoat.

Company management is putting on a clinic for how not to handle a corporate crisis.

The stock is only down around 16% from its all-time high. This is still a great business. No matter what people say, I’m guessing most users aren’t going to care. Where else are people going to go to show their high school friends how great their Internet life is?

I hate the phrase “the easy money has been made” in the stock market because investing is never easy. But it sure seems like it’s going to be even more difficult than usual for owners of Facebook shares.

Money managers shouldn’t rely on their investors to help make portfolio decisions. The investors in these funds are supposed to be more worried about the decision-making process, potential style drift, and whether the manager is doing what they said they were going to do in the pitch meetings. An allocator’s job isn’t to tell their money manager which stocks to buy or sell.

But career risk plays a much larger role in the investment decisions of money managers than most would acknowledge under a lie detector. Headline risk often leads to calls from investors to understand what’s going on. This pressure can make it difficult to make rational decisions as a portfolio manager.

It’s possible this whole ordeal dies down and this turns out to be a great buying opportunity for Facebook shares. But it’s also possible that this lingers for some time from further leadership missteps, government pressure, and similar stories that come to light.

For these reasons, this stock falls under my too hard pile.

Career risk may cause many large money managers to agree with me if this crisis continues.